THE COEN BROTHERS are auteur titans, and every time they make a movie, it’s not simply a movie but a new piece to fit into their canon. The specific ranking of the Coen Canon varies, but most would put No Country for Old Men, The Big Lebowski, Miller’s Crossing, Raising Arizona (my favorite movie of all time), and Blood Simple in the top tier; Barton Fink, A Serious Man, Inside Llewyn Davis, and O Brother, Where Are Thou? in the second tier; and The Hudsucker Proxy, The Ladykillers, and Intolerable Cruelty in the lowest tier. Hail, Caesar!—which was quickly pronounced a box office dud—has apparently been cast in the lowest tier, a minor and disposable work by aging masters. I not only wholeheartedly disagree with this assessment, but find it fairly depressing that such a tight, fizzy, charming movie is so summarily dismissed. Maybe we do deserve a world of only comic book movies….

Hail, Caesar! is certainly amongst the Coens’ brightest, least cynical, and least nihilistic movies. A breezy mystery that unfolds over 24 hours during the golden age of the Hollywood studio system, Hail, Caesar! is a wry and affectionate caper about a particularly skilled company man. Josh Brolin plays Eddie Mannix (loosely based on the real Eddie Mannix, the legendary executive and “fixer”), a tremendously competent and harried executive at a major studio juggling myriad problems and hijinx. There’s Hobie Doyle, a cowboy actor struggling (hilariously) in a chamber drama, DeeAnna Moran, a flinty bombshell who’s about to be a single mom, Burt Gurney, a difficult musical star prima donna, and finally Baird Whitlock (a loose, endearing George Clooney), a drunken megastar who goes missing from the set of the studio’s most important prestige pic, a sword-and-sandals biblical epic entitled Hail, Caesar. 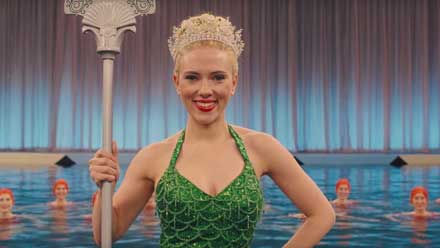 The stakes of the film are fairly low, and everything works out just fine (unlike  the bleakness of Inside Llewyn Davis, No Country for Old Men, and A Serious Man). It’s mainly a showcase for several delightful performances, peerless production design, and Roger Deakins’s cosmically psychedelic cinematography. All the stars (Clooney, Scarlett Johansson, Channing Tatum, Ralph Fiennes) are great and clearly having fun. Perhaps the best performance goes to Alden Ehrenreich as Hoby, who initially seems like a rube but is revealed to be the clever and wise hero of the film (as well as having one of the most delightful on-screen moments I’ve seen in a long time).

All of us occasionally have moments that remind us we’re getting old—you discover a gray hair, you finally really get the Fleetwood Mac album Mirage, or you find yourself delighted by a period screwball comedy that everyone else shrugs at. Oh well, keep your Deadpool, kids—Hail, Caesar! is one of the best movies of the year.   A-