﻿Do you remember drawing as a child, that feeling of satisfaction as an image took shape under your hand? Maybe comparing pictures with a friend’s or running to show your mom or teacher? Most young children love to draw, and create unselfcon-sciously, but at a certain age that can change. Suddenly kids become their own worst critics, decide they aren’t artistic, and drawing is left behind forever.

But what if it was assumed that every child could learn to draw realistically? What if they actually can? At Maharishi School, that reality is unfolding one lesson at a time.

Art teacher Emily Timm was dismayed to discover that many of her students were stressed out by the prospect of drawing. Ceramics class was going swimmingly, photography was fun, and watercolors were extremely popular, too, but when it came time to draw, even some of the more experienced students were freezing up.

She relates, “I had a student that I’ve been teaching for about three years turn to me and say, ‘I’m not an artist, I can’t draw.’ That was a big red flag. . . . Even though I’d taught her a lot of skills and I felt she could draw fairly well, she didn’t feel satisfied with her work.”

Signs of trouble continued a few days later during another drawing lesson. “I had several children just feel horrible. One cried, another little boy said that he felt his drawing wasn’t good enough.”

Timm knew there had to be a better way to keep kids positive and inspired about drawing. “I hit this brick wall, and thought to myself: I do not want children to go through eight years of instruction with me and then decide ‘I’m not an artist’ because they have no way to know how, how do I draw?” 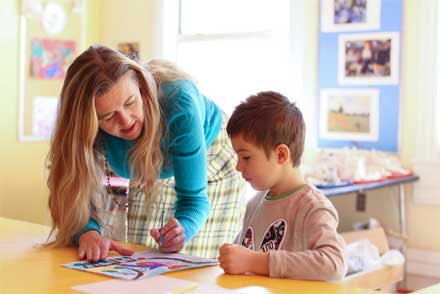 Using principles from Drawing with Children, by Mona Brookes, Emily Timm gives her students the tools to create with confidence. (photo by Juliet Jarmosco)

That’s when Timm remembered Drawing With Children by Mona Brookes, and decided to develop and adjust the lessons for Maharishi School. Brookes asserts that all children can learn to draw realistically, not just the gifted few. Drawing With Children instructs teachers to use an “alphabet” of shapes that help kids look more closely and accurately at the images they wish to draw. Although the curriculum incorporates a structured series of rules, it doesn’t create cookie-cutter results.

“This is practice,” Timm tells her students. “This is something we’re learning so that when you move on to your own way, your own style, you’re able to.”

“It’s not about doing step-by-step drawings,” Timm explains. “It’s about learning the elements of shape—the dot, the circle, the straight line, the curvy line, the angle—and that everything is made up of those elements. The step by step is only the beginning to teach you to see those  patterns.”­

In addition to the new learning style, the classroom atmosphere underwent a major change. Drawing would now be done quietly so that everyone could focus exclusively on their work. At first the students were skeptical, but soon, Timm laughs, “Students were shushing anyone that spoke. One of them even shushed our principal when she came in to say something!”

The largest challenge, though, was to remove the fear of failure that haunted so many of the would-be artists. She remembers, “One student who is incredibly talented and has taught herself to draw fairly well would often shut down because she felt dissatisfied with her work. She’d work for a really long time on a drawing, and then she’d feel like she made a ‘mistake’ and the drawing was ‘ruined.’ She couldn’t move forward, and she’d put her head down and burst into tears. This curriculum has really alleviated that.”

By simply sitting quietly with a piece, rather than immediately abandoning it, students can learn to take a new direction. Timm tells her classes, “You can transform your mistake into something else. You don’t like the side of your jug that you drew? Well, maybe that’s the handle and you can draw the side of the jug again.”

After two classes using the new curriculum, Timm learned that her formerly perfectionistic student was drawing every night for enjoyment, the way she had when she was younger. Learning that drawing is a process and that there are no mistakes made it pleasurable again.

As promised in Drawing With Children, gains in confidence and skill level were experienced by every child. As an added bonus, Timm noticed that these improvements weren’t isolated to her neurotypical students. “There really wasn’t any difference in the achievement of the kids with learning differences and the achievement of the kids who don’t have those problems . . . it was pretty amazing that they were able to do exactly what all the other kids were able to do and they felt really satisfied with their work.”

Emily Timm is pleased that her kids are no longer stressed out about drawing class. “I’ve seen a massive improvement in both the beauty and the skillfulness of the drawings, and the satisfaction of the students. One of the things we really look for with consciousness-based education is that the child is experiencing fulfillment. When you’re looking at your work and you’re really satisfied, that’s what’s going to drive you to achieve. That is the best motivator.”

Emily Timm aspires to become a certified Monart teacher one day, but for now is incorporating techniques from Drawing With Children into her existing art curriculum.