Justin Johnson fell in love with American roots instruments during a gig a while back.

In a recent conversation, Justin recalled first playing on an old Stella acoustic guitar that his family had in the house. “The guitar was old, the neck was warped, and it only had one string on it,” he said, “but I remember laying it on my lap as a kid in Seattle and picking out melodies, up and down the fretboard.”

Years later, after moving to North Carolina, he got his first working guitar, which he played every day until he fell asleep at night and then again first thing in the morning.

These days, Justin wants to transport his audience back to the places that inspired his songs. “If I play my Delta blues-style song ‘Midnight at the Crossroads,’ I want to take the listener right back to that dirty Mississippi roadside in the cold, where I first wrote and recorded that track.”

Justin was introduced to roots instruments during a gig several years ago. Someone showed him a four-string guitar with a fretted neck and a cigar box for a body. Intrigued, he made up a tuning for it, grabbed his guitar slide, and started playing some blues. He was instantly hooked.

On Smoke & Mirrors, Johnson’s performance sparkles with delicacy as he carefully shapes notes and cleanly transitions from chord to chord. There’s something magical about his interpretations of blues classics. Out of the 22 tracks on the double album, 19 are traditional songs and 3 are originals, all arranged and recorded with roots instruments like the one-string diddley bow and cigar-box guitars. There were no conventional or factory-made instruments used on the album. 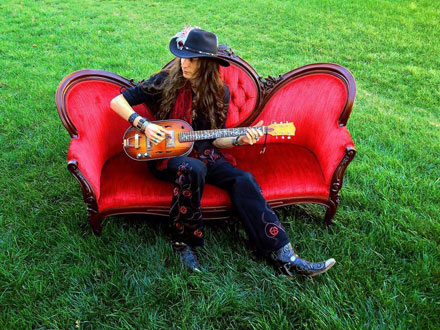 Begin your journey with Justin Johnson’s music on these tracks, accompanied by his commentaries on the songs.

“Satan, Your Kingdom Must Come Down.” “There are so many classic gospel songs, and I always find myself especially drawn to the darker, minor-key melodies.  ‘Satan, Your Kingdom Must Come Down’ has an especially dark feel, and is one of those melodies that has been re-tooled multiple times to fit different songs and feels. . . . The darker version is the vibe I took with my arrangement of this song.”

“In the Pines.” Justin’s fiancée Nikki helped him arrange this song during a visit to a remote Pennsylvania cabin a few years ago. Justin says, “What’s really eerie and ironic is that this version was just licensed to Dodge Motor Company for a national ad campaign, and the commercial they created . . . looks almost identical to the cabin, road, and field where we were staying when the song was written.”

In June, Justin releases a new CD named If Walls Could Talk, which was recorded at Cash Cabin Studio and produced by John Carter Cash, son of the legendary Johnny Cash. While Smoke & Mirrors was an homage to American roots music and traditional songs, Justin says his new CD is almost entirely original songs.