The film crew keeps on eye on the drone camera.

Don’t tell his wife, but Dick DeAngelis is in love with another woman, and her name is Fairfield, Iowa. Dick, who moved here from New Jersey in 1983, is so passionate about his home that he’s making a documentary film about it.

“I function a lot on my intuition,” says Dick. This intuition led him to organize Fairfield’s All Things Italian festival, a community-wide celebration of Italian cuisine, arts, and heritage. Last year was the tenth and final year of the festival, and DeAngelis thought, “Okay, enough civic duty, I’ll go back to my business full time,” but intuition struck again when he came across a documentary about his original hometown in New Jersey. He thought to himself, “I could do something like that about Fairfield, but it wouldn’t be boring!” He dismissed the notion at first, but after taking a dip into Fairfield’s fascinating history, he wasn’t able to let it go.

Dick started mentioning the idea to a few trusted friends, who said unanimously, “You’ve got to do this, this will be great.” So he surrendered his resistance, broke the news to his wife Karen, and began to assemble his creative team.

If you’ve been to Fairfield, you may have noticed it’s … fairly unusual. For a town this size, it’s got a heck of a lot going on. Home to a monthly art walk on the town square; the summertime Vintage Dodge Power Truck Rally; an impressive Arts & Convention Center; one of America’s “greenest” mayors; the annual FAIRfest music festival; award-winning coffee and burgers; an incredibly diverse population of artists, students, entrepreneurs, investment bankers, and farmers; a consciousness-based university; and a large community of practicing meditators, Fairfield is a grand experiment that’s still unfolding. 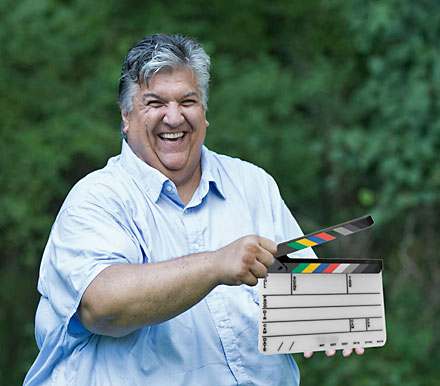 “Fairfield’s being recognized as a small town that’s way ahead of its time,” says DeAngelis. “It’s got a lot that towns three or four times the size don’t have, plus it has this inviting, almost magical atmosphere that makes people who visit want to come back and people who live here want to stay. What is that? I wanna tell that story.”

The Land and Its People

Dick’s ambitious plan is to tell Fairfield’s unique story in three 20-minute segments, focusing on “the land, the people, and the spirit.” As he started researching what made the region attractive to its first European settlers in the early 1800s, he quickly realized he wasn’t going back far enough and got very curious about the Native American tribes who once lived in the area. It turns out that the region was particularly revered by the Sac & Fox (Meskwaki) and Ioway tribes—due, in part, to the fact that large buffalo herds roamed here.

“Many people probably don’t know that parts of Jefferson County were actually known as bison country,” says DeAngelis. “In fact, we’ll be shooting footage of a bison herd in Kansas that’s the same bison, down to the DNA, that roamed here.” Dick’s crew was also invited by Historic Preservation Director Jonathan Buffalo to attend the Meskwaki Nation Powwow in Tama and do some filming there. The team will also be consulting with Lance Foster, Tribal Historic Preservation Officer of the Iowa Tribe of Kansas and Nebraska.

Evidence of Fairfield’s mesmerizing history goes back even further. Dick says excitedly, “We’re talking to a retired archeologist who participated in many finds from old cultures that lived here in Jefferson County. . . . He doesn’t like talking to many people, but he’s sharing his insights with us, and he’s taking us on a tour of the different digs he’s been on.”

Dick also plans to zero in on some of the remarkable individuals who have called Fairfield their home. “There are some amazing characters who have come along . . . really heroic . . . some of them buried right on the B Street cemetery there.” Have you heard of Mehitable Ellis Woods, perchance? Best known as Auntie Woods, this Civil War-time heroine delivered food, clothing, and medical supplies to soldiers from Jefferson County, making 13 trips, with cargo ranging from 10 to 37 tons each. Folks who came across her path and wanted to know where she was going were invariably met with the answer, “To see my sons, all of whom are in the army.”

With support from community and regional historical experts, the project has come a long way in a short time. Gene Luedtke, a long-time employee of the Fairfield Ledger, has been a great resource for the film, along with Fairfield Public Library, the Carnegie Museum of Jefferson County, and the Iowa Archaeological Association at the University of Iowa.

Dick is grateful for the local history buffs who are helping him “get it right.”

The Spirit of Fairfield

“There’s a creative, vibrant energy here that a lot of folks resonate with,” a quality due to the convergence of many factors which DeAngelis hopes to capture on film through research—and many, many interviews.

“ ‘Spirit’ is a pretty inclusive term. We’ll look at our churches and their substantial impact on the history of this town. And of course we’ll look back at when Maharishi came with MIU and what happened there, and what it meant to Fairfield,” says Dick. “For many years, Parsons College was the heart of this town. When it went under, Fairfield was looking for something to fill the void. One person told me it came down to a choice between a prison and Maharishi University.” The book A Fair Field by Susan  Welty is an especially valuable resource for the project. “In her updated version from 1975, she describes how many Fairfield residents felt about Maharishi International University coming in. It’s really fascinating. I may actually recreate that, it’s so beautiful. It’s a perfect description.”

DeAngelis is producing the documentary in conjunction with Fairfield Media Center. When asked about the creative team, the father of five was quick to correct, “We’re not just a team, we’re a family, all committed to the same goal—to create something special for and about Fairfield.”

The camera crew is led by Coral and Melodia Morales, both graduates of the David Lynch Film program at MUM. “These young women are amazing filmmakers in their own right . . . wonderful people with real creative insight,” says DeAngelis. Kadie Roberts is assistant director, Rene Holmberg is orchestrating the drone footage, Werner Elmker is working behind the camera as well as collecting archival footage, and Jason Strong, director of Fairfield Media Center, is in charge of sound and a portion of the editing.

The crew is continuing to grow. “People are wanting to be a part of it,” says Dick with his patented smile.

DeAngelis says he’s “never made a movie before,” but he’s certainly got the heart of a director. “Dick has such a clear vision,” says Coral Morales. “His translation of Fairfield’s unique soul is inspiring . . . and he knows how to lead. How could we not be involved?”

Clear vision, indeed. Ever since the inspiration bug bit him, Dick has been barraged with detailed “downloads” of how the film should be made. “I keep getting these visions of shots, it’s crazy!” 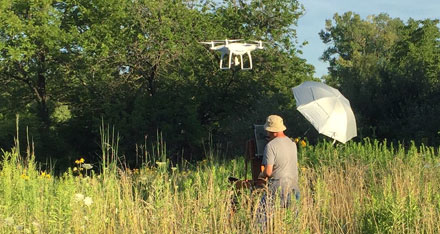 DeAngelis is especially giddy about footage he is planning with a drone camera. “To give you an idea of one of the shots I see: John Preston is going to do a painting for us of a specific shot from the drone footage at Round Prairie. . . . We’re gonna move right from the painting and dissolve into the actual drone sequence, where we’ll see and talk about the land and the topography of Jefferson County and what made it so attractive for Native Americans and other people when they first came here. Then we’ll come back to the shot and it’ll fade back into John’s painting. It’s going to be a special tidbit.”

In addition to collaborating with John Preston—one of the premier landscape painters of the Midwest—Dick is also planning to involve local musicians to create the movie’s soundtrack.

DeAngelis is also jazzed about a “now and then” segment of footage he is planning, made possible from old photographs discovered online. The viewer will take a tour of current buildings in the town, juxtaposed with images of what they looked like in the past—shot from exactly the same angle.

“We’re going to have one shot at the end where we’re inviting the whole town to participate—taken on the town square with four drone cameras that will rise up above the crowd while everyone waves. We’ll let everybody know when that’s gonna be,” says Dick, “so your kids and your kids’ kids can say, ‘Oh you were there, I see you!’ Nobody’s gonna want to miss out.”

The team hopes to have a teaser completed by late fall to generate excitement and help with fundraising for final editing. “Right now everyone is contributing their heart and soul to this. We’re keeping the budget very reasonable, but the editing expenses are substantial, so we formed a nonprofit association and we’re asking anyone that can to help out and be a part of this.” Dick tells me that the film itself has yet to be titled, and laughs, “Maybe if someone donates $5,000 we’ll let them name it.”

Dick DeAngelis is an inspiring example of someone who listens to his inner guidance and says yes in a big way. He reflects, “There’s probably some other reason I’m doing this that I’m not even aware of. That happens a lot for me when I follow my heart. And that’s what I’m doing here.”

If you’ve got a story to tell about Fairfield or would like to help, please email Dick DeAngelis at dickd@deangelis.net, or call him at (641) 919-4277.

The Fairfield documentary team has an immediate need for an Assistant Director to help organize, brainstorm, schedule, and help with grants, team communication and marketing, social media skills a plus. Documentary experience a plus. This is a volunteer position for a couple hours per day working with a non-profit production association. If you love Fairfield and loves being part of a team doing something fun, call us. Contact Dick DeAngelis at dickd@deangelis.net or 641-919-4277.

A New Breed of Farmers: Fairfielders are Changing the Paradigm of Growing and Eating