I sample 50 to 75 tracks of contemporary music each week to prepare my radio show playlist, covering a variety of genres: rock, blues, indie, folk, alternative, world, and electronica. At the end of the year, I like to collect my favorites among these tracks for the annual Crispy Awards. The year’s list consists of contributions from eight countries: Denmark, Ireland, Iceland, England, Scotland, France, Canada, UK, and the U.S. I’d also like to give special recognition to Detune by Kaleida, as Fringe Toast Music Album of the Year.

On February 15 (with replay on February 18), I will tip the microphone to honor these 2016 releases from artists whose individual tracks do not always get the airplay they deserve. You won’t hear most of these on mainstream radio stations.

The sequence below mirrors the order of play on this special tribute program.

•       “All Alone With Something to Say,” by Bonnie Raitt. Even though she’s won 10 Grammy Awards, I rarely hear this song from her new album. Vintage Bonnie stylizing!

•       “I Just Wanna Feel Something,” by Sam Bush. Constantly pushing the edge of newgrass, Sam lays down a sophisticated track with top musicians.

•       “Me & Magdalena,” by the Monkees. Yes, the Monkees from way back. The boys are back at it again with a softer, more mellow sound.

•       “Words in My Head,” by Steve Mason. The Scottish lead man from King Biscuit Time and the Beta Band now records under his solo moniker. Man knows how to package a song.

•       “Call Me Out,” by Shook Twins. The Idaho-born twins, who performed by candlelight during a power outage at FAIRfest 2015, offer new tracks.

•       “Black River,” by Sierra Hull. The rising 25-year-old singer and mandolin player proves why she is getting attention.

•       “On the Other Side,” by Society of Broken Souls. Fairfield’s own husband-and-wife duo complement each other’s strengths on their first album under a new name.

•       “Everything to Hide,” by Sarah Jarosz. With new musical collaborators, Jarosz paints beautiful harmonies that touch the heart.

•       “Panorama,” by Møme. The French DJ born as Jérémy Souillart contributes a sample of his electronic wizardry. 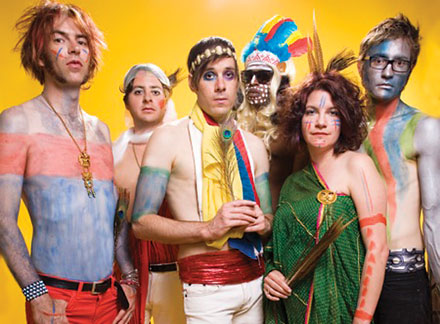 •       “Nursing Slopes,” by Of Montreal.  This Atlanta-based band was given its name by frontman Kevin Barnes to honor an ex-girlfriend from Montreal.

•       “Get Low,” by James Vincent McMorrow. This Irish fellow has a distinctively heartfelt, mellow sound.

•       “Shade From the Sun,” by Matisyahu. A Jewish-American reggae musician with beatbox talents rests cool in the shade.

•       “Detune,” by Kaleida. This English electro-pop female duo oozes with talent beyond their mid-20s years. Kaleida’s Detune EP is named here as Fringe Toast Music 2016 Album of the Year.

•       “The Coo Coo Bird,” by Laura Veirs. Producer and multi-instrumentalist Tucker Martine has produced her last nine albums. This track reveals his masterful touches around her songwriting brilliance.

•       “Minor Is the Lonely Key,” by Look Park. Stepping away from Fountains of Wayne, Chris Collingswood lays out an effective, hooky song from his new album.

•       “Dodged a Bullet,” by Greg Laswell. The California indie musician and producer who wrote and performed the theme music of TV show Friday Night Lights reveals his talents again.

•       “Stretch Your Eyes,” by Agnes Obel. The Danish songwriter and vocalist offers a beautiful melody that reveals her classical background.

•       “Tilted (Bayonne Remix),” by Christine and the Queens. Born as Héloïse Letissier, this talented lady produces multimedia and dance concerts that complement her exquisite electro-pop music.

•       “Silence Can Say So Much,” by Elephant Stone. The Canadian band with an Indian member leans eastward on this track.

•       “Walk on Water,” by Diane Birch. The blues and soul songwriter who also plays keys, guitar, and violin has a voice that possesses a rare timbre and nuance.

•       “Prayer for the Dying,” by Lisa Hannigan. The National’s lead man coaxed Hannigan back into the studio to produce a wonderful new album that explores her Irish roots.

•       “Walk Through the Fire,” by Zayde Wølf, featuring Ruelle. This track gets nods from TV shows and video game ads for its beauty and grandeur.

•       “Beyond Side,” by Potlatch. This Korean electronic music is downtempo and moody.

•       “When That Full Moon Rises,” by Justin Johnson. There’s no better way to finish than with the virtuoso heritage-roots instrumental master, from his CD If Walls Could Talk.

Mark your calendar for Wednesday, February 15, 2017, at 8 p.m. or Saturday, February 18, at 8 a.m. to hear the entire 30-song playlist on Fringe Toast Music on KRUU-FM in Fairfield at 100.1 FM or live streaming at kruufm.com. Listen to what’s been kicking around in my head!

Food for Love: My Lifelong Affair with Black Bean Salsa