“I’d like a cup of coffee and a hot shower,” my father said over Facebook Chat from his room in Kenya. “I have three months of African dust in my beard from riding around on the back of a motorcycle.” I’d just asked him what he wanted to do when he got back home. He was days away from returning, and it was clear that he was tired after much personal sacrifice.

This was my father’s first trip to Africa and also his first trip as the founder of the nonprofit organization Charity Seeds. He had gone there to meet with a group he partners with called Grow Biointensive Agriculture Center of Kenya (G-BIACK) to start implementing sustainable organic farms at schools.

I sat down with him in early March to ask about his experiences in Kenya and his goals for the project. I was interested in how those goals had shifted from the beginning and how his ideas about helping the people in Kenya have changed since he’d been there in person.

Paul Strubell: How did you identify your charity’s mission?

Kim Strubell: A single experience can move mountains in your heart. Several years ago, when I spent time in Darién Gap with Garrett [Paul’s brother], we saw how the simple way of life of the Kuna and Emberà Indians flourished—and it was a blessing to witness. We watched as they hunted, fished, and lived off the land’s plentiful fruits and vegetables.

But while the village thrived, a threat lurked on the horizon. Logging roads were beginning to penetrate the Darién jungle, which is 10,000 square miles of wilderness between Panama and Colombia. Deforestation threatened the heart of the jungle. Garrett and I reveled in the beauty of this indigenous culture, and the last thing we wanted was for this remaining piece of it to be destroyed in the name of “progress.”

Upon returning home, we could see it was not just the people of Darién who needed systems for independence in this changing world. Rather, it’s all people in various cultures and climates. With years of research and study, Garrett and I searched for a sustainable system that would support the Kuna and Emberà Indians’ way of caring for the earth and community. They were going to need it for the inevitable changes headed their way.

Then we found Charity Seeds. Charity Seeds believes that children and education are the way forward. By providing the people with education for saving their soil, water, and seeds, they’re able to provide food security and food sovereignty for generations to come. Equipped with this knowledge, the children are able to maintain their communities as they grow into adults, and pass this system on.

No child, no person, should ever be hungry or without water. Meeting these basic needs is the key to preserving their way of life and culture. It is Charity Seeds’ mission to provide the information that will allow them to keep their cultures thriving and resilient to outside forces.

How did your expectations line up to the reality of your first trip to Kenya?

I knew it was going to be hard. What I didn’t know was how much I had taken for granted. Just getting from point A to B was very difficult. I never expected to put 500 miles on the back of a motorcycle. I wanted to see where the children worked when they missed school, and the only way to get there was on a motorcycle or walking 20 miles. One place they worked was at a quarry and another was a commercial pineapple farm, but both were difficult to get to.

The roads were muddy, rocky, and dangerous. To experience all aspects of Africa, I had to ride motorcycles, travel in the back of pickup trucks, or ride a bicycle, if time allowed. Simple jobs turned into major tasks. I knew these were temporary hardships, but the Kenyans just live through these harsh realities without complaining.

One of the most difficult things was overcoming the depth of poverty. I feel this is why it’s so important to work with people who are familiar with their own culture and land. There’s so much diversity in the African culture that it’s near impossible for a visitor to comprehend it all in a few months. Working with Africans allowed me to fulfill my expectations with greater ease.

When I arrived, I expected to bring gardens to schools, but I soon realized that  there was a process that had to be followed. Thanks to my partners in Africa, the process was outlined very clearly. That allowed me to fulfill my expectations in a shorter period of time.

What were your goals for this trip?

The main goal was to bring organic farms to schools. So I created a duplicable method:

The first step is educating certified trainers in organic farming. After training, we send them back home to their villages and communities. There they visit the headmaster at their former school. With the headmaster’s permission, the trainer and student volunteers form an organic gardening club.

The club, which comprises children ages 10 to 15, begins to grow organic food at their school with the help of their trainer. This garden helps feed the student body.

With the aid of my partners, we established a permanent school for trainers, which will allow us to build the garden-to-school program and expand our outreach to all the counties in Kenya. 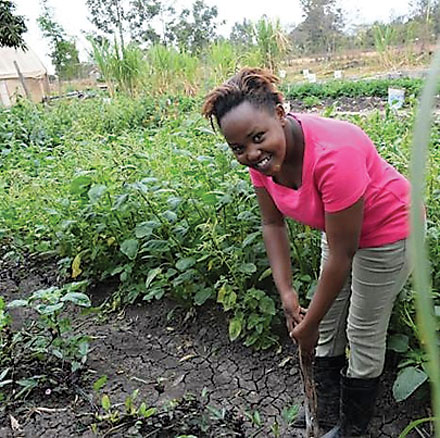 A student intern works in the garden.

What were some of the highlights of your trip?

By far, the most enjoyable part was working with the trainers and visiting the schools. Many times when I felt tired and drained, it was the children’s energy and joy that inspired me to keep going. I could be in the slums of Nairobi or visiting the street boys of Kisumo and find inspiration in the children. Although they live with deep hardship, the children transcend their poverty. The brightness on their faces, the light in their eyes, and their happiness kept me going.

How do you think Charity Seeds differentiates itself from other charitable foundations? Why should people choose you?

I learned that it’s the people that make something special. Charity Seeds is a grassroots organization that is built on the people involved. Money is important for any organization to run. but to truly flourish, you must have a network of people working together.

Charity Seeds is different because it does not give handouts or build large infrastructures. It teaches children about food security and food sovereignty. It’s built on education, and because of this a little bit of money goes a very long way. One hundred percent of donations funds the farm-to-school project.

One of the most difficult aspects of enacting positive change in a culture is understanding what help they actually want as opposed to what you think they need. How are you working with them to help?

This is a very good question. I learned that just having a garden is not enough. For it to be sustainable, it had to satisfy all the needs of the people. The most important need is livelihood. The project had to create livelihood and the opportunity to flourish. We did this by creating a framework for the trainers to build an enterprise or business. After establishing gardens in the schools, the trainers get 10 percent of the produce. They can eat it, trade it for rice or meat, or perhaps open their own small farm-to-restaurant establishment.

Now that you are back in the U.S., how are you planning to ensure that the project continues?

From the very beginning, the project was established with sustainable methods in mind. We have systems set up that support and encourage the garden-to-school program to continue autonomously. I see my role as someone who brings awareness to these projects so they can flourish and touch many more lives in hopes of alleviating hunger and poverty.

What I Learned from a Decade in the Garden