Rescued piglets are among the residents at Iowa Farm Sanctuary.

When we featured the Iowa Farm Sanctuary last year, Jered and Shawn Camp were still looking for farmland. After searching for just the right place, the Camps found a ten-acre farm in Marengo. Surrounded by fields of corn, the Iowa Farm Sanctuary is nestled among rolling hills, with a small pond and plenty of space for grazing and rooting. It’s home to 28 rescued farm animals, including cows, sheep, goats, pigs, ducks, and chickens, plus five rescued dogs. It also provides an opportunity for people to experience these animals as sentient, intelligent beings in a picturesque rural setting.

Given the positive feedback on the website, the Iowa Farm Sanctuary is already a popular destination for families looking for a wholesome farm experience.

How The Animals Got There

Some of the animals have miraculous rescue stories. Pigs Kayla and Sammy both fell out of trucks on the Interstate, and escaped with minimal injuries. Runts Monkey and Marley were rescued from one of Iowa’s largest hog confinements.

“They were set to be killed because they were so small they wouldn’t make good wean pigs,” Shawn says. It takes more time and money to get runts up to slaughter weight than they’re worth, she says, so they’re generally killed when they’re babies. An employee took them home instead, and got them to the Iowa Farm Sanctuary on the Fourth of July. “She told us at that particular facility they kill 2,000 runts a week.”

Hope, also a runt, got one of her back legs crushed when she was stepped on by another pig. “She’s doing fine now,” says Shawn, “but if she grows any more, she’ll need a prosthetic.”

The pigs are kept in their own fenced pasture. Shawn has no doubt they’d get along fine with the other animals, but their need to root destroys the grass other animals need to graze on. The calves, goats, and sheep are in a larger pasture. 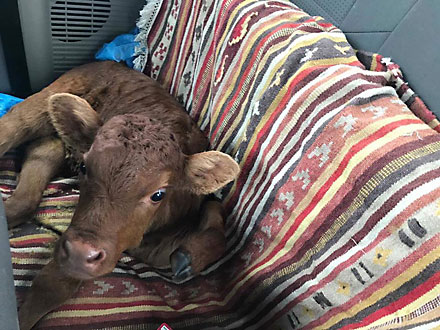 A sweet calf travels to his new home at the Iowa Farm Sanctuary.

Most of the animals are friendly and enjoy being petted by visitors. Some of them, like former veal calf Carl, can be downright pushy. Carl leans his forehead into visitors, hoping to have his head scratched. Bennie, Carl’s buddy, a sweet black and white kid, was a runt whose mother wouldn’t nurse him. The farmer was going to take him to auction when a neighbor rescued him. Bennie likes having his head scratched almost as much as Carl and will butt against a visitor hopefully. Being a goat, he’ll also absentmindedly chew on whatever coat hem or scarf edge he finds.

Bennie and Carl share a large pasture with twin goats Racer and Rider, their mother Gigi, and their adoptive sheep father Matty. Also present are Kip, a calf unexpectedly born on a feedlot, and cows Donnie and Dannie, who came from an Illinois dairy farm.

Shawn’s been impressed with the level of connection small-town farmers feel for their animals. She says the farmer who brought Kip to them looked “like he might cry when he gave him to us. He was really excited and said he wanted to visit in the spring.”

Racer, Rider, and Gigi all came from a small farm whose owner was having back problems and couldn’t care for them anymore. The Camps took as many goats as they could and helped find homes for the 20 or so others. 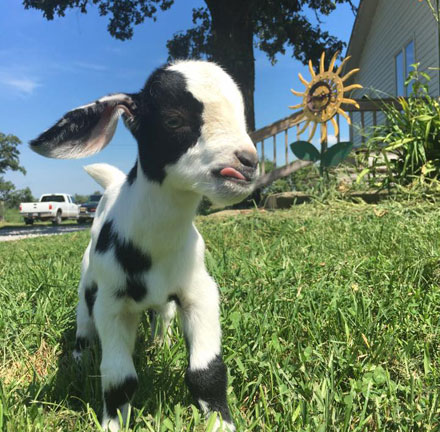 Bennie, a runt whose mother wouldn’t nurse him, was on his way to auction when a neighbor rescued him.

Otis, an intact ram, is their resident “grumpy old man” and has a pen all to himself. An escape artist whose owner was no longer paying the fines to get him back, Otis is now lord of his own pasture. “He’s really nice through the fence, usually, but when you try to put him in his stall or bring him out, he’ll just ram up against you,” says Shawn.

The rest of the residents enjoy head pats and belly rubs, joyfully bounding up to anyone entering their pasture or pen for a visit.

The Iowa Farm Sanctuary is partnered with the Animal Rescue League in Des Moines. They’ve taken a few animals from the ARL and have directed people there when they’ve been full. They also have a relationship with Iowa City Animal Care and Control. People looking to place farm animals can work with the Camps and post pictures on the Iowa Farm Sanctuary website to find them new homes.

The Iowa Farm Sanctuary had a Grand Opening last October, but has been closed to visitors for the winter. Shawn is excited about their grand reopening event, the Spring Pig-nic, on Sunday, May 7, noon to 3 p.m. There will be barn tours, games, photo booth, prizes, silent auction, and live music. Tickets are available on Facebook and their website.

“This time we released more tickets because we sold out so fast last time,” she says. If you miss the Pig-nic, don’t despair, there are a number of fun activities planned during the warmer weather. You can book private tours by emailing tours@iowafarmsanctuary.org Starting May 14, the sanctuary will be open every Sunday for Barn Tours, 10 a.m. to 2 p.m., “so you can swing in and swing out, however you please,” Shawn says.

Yoga workshops and painting parties  are being planned for the summer. A local Girl Scout Troop visited in April, and other groups are welcome to tour the facility too. The Iowa Farm Sanctuary is also working with the University of Iowa REACH Program for students with disabilities.

Also in the works is the Garden for Good, which will be a sustainable food source for their rescued animal residents. Seed donations and gardening supplies are needed. Those  wishing to volunteer may contact iowafarmsanctuary.volunteer@gmail.com.