My introduction to Eulenspiegel Puppets in West Liberty began with rum punch and four-inch-tall naked ladies.

As editor of the Iowa Source monthly calendar of events, I’ve been in the habit of checking the Eulenspiegel (pronounced oil-n-speegel) website for upcoming productions. Peter and the Wolf; Sal Fink, Catfish Wrangler; The Amazing Adventures of Willy the Wooly; and other folktale or kid-friendly titles are typically what I find on their season’s offerings. But my interest was piqued this past April when, for the second year in a row, they hosted a touring company out of California called Little Blue Moon Theatre, whose specialty is “Puppets for Adults Only!” Little Blue Moon promised a “deliciously risqué” version of Mutiny on the Bounty (and other stories), and I admit, curiosity got the better of me.

I roped in a theater-loving friend of mine, and we set out for West Liberty one Friday evening with a bag of potato chips to tide us over on the drive. Girls’ night out.

We were greeted at the door by a very welcoming Monica Leo, Eulenspiegel’s Managing Director, and were encouraged to stake out some seats in the first few rows and enjoy a complimentary glass of punch.

I’m 100 percent positive it was not the rum punch speaking when I tell you it was one of the most charming theater experiences I’ve had in a long while.

The “paper theater” stage before us, complete with footlights made from mini tart tins, measured only two feet wide and was an exquisite marvel of art nouveau design. Every inch of it was delicately illustrated—and tiny. So tiny, in fact, that although the seating area was quite small, each audience member received a pair of opera glasses with which to view the play.

Live ukulele music began and we settled into our seats. The miniature stage curtain parted to reveal a miniature ship on a miniature ocean, and through my theater glasses I spotted a miniature parrot sitting on miniature sailor. The music swelled as began the tale of mutiny and tropical bounty, and turned I to my friend with stupid grin and widened eye and said, “Dis be da bess ting evah!”

As we discovered, when viewing a puppet play through opera glasses, somehow innocence, virtue, and sophistication are restored to even the bawdiest content. Sure, there was some mild adult subject matter—a few half-clad island dwellers, a Parisian nudist named Natalie, and a couple Kama Sutra jokes—but the production was performed in a cheeky, wink-wink, all-in-good-fun sort of way that set the audience at ease.

The “puppets” were winsome two-dimensional cutouts that slid into view along wooden grooves that comprised the stage floor. A variety of masterfully rendered backdrops transported bare-bunned heroines and parrot-headed heroes from tropical paradise to barren seascape to Paris apartment. 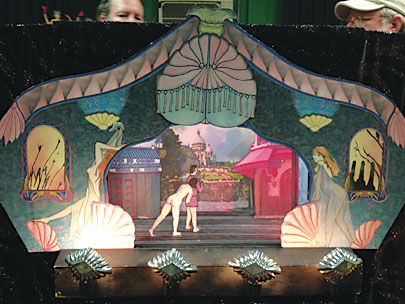 The two performers, husband-and-wife team Michael and Valerie Nelson, took turns as puppeteer and narrator, occasionally joining together for a sea shanty in two-part harmony. They were clearly having a great time; they improvised a little, broke character a little, and made us feel as if they were friends performing for friends in someone’s living room. We laughed the night away.

I was inspired. I wanted to drive straight home and make my own paper theater.

If you haven’t been to Eulenspiegel in a while—or ever—I highly recommend getting out there. Or, even better, arrange to have their amazing team of puppeteers brought to you! Hitting the road and getting communities involved in the arts is what they do best.

Eulenspiegel is currently hosting long-time friend and collaborator Eli Portugal from Jalapa, Mexico, until the end of June. Eli has been a guest performer with Eulenspiegel on and off since 1995, the same year that Monica and her husband bought (and began rehabbing) their downtown West Liberty building, the Owl Glass Puppetry Center that they now call home.

One of the most popular programs that Eli and Monica tour together each year is their (family-appropriate!) bilingual community show. This spring’s offerings include one of their all-time favorites, Five Suns of the Aztecs, a colorful play of creation myths told through English and Spanish dialogue, narration, and music. Monica assures me, “It’s designed so you can catch most of the action even if you don’t understand Spanish.”

These “community” shows, usually involving a multi-day residency at a school, are an immersive way to introduce youth to the performing arts, storytelling, and in this case, different cultures. Monica and Eli spend the first few days of each residency teaching kids a selection of music and puppetry from the show, accompanied by various workshops and rehearsals, culminating in a performance for their community and peers.

The Right Puppet for the Job

It’s impressive how many different puppetry styles are used at Eulenspiegel, both in their permanent space and their touring shows. I was treated that April night to an evening of “paper” or “toy” theater, but Eulenspiegel also uses life-sized rod puppets, tabletop marionettes, and shadow puppets, to name a few—often within the same show. As Monica learned from legendary puppet master George Latshaw, “When you’re planning a show, write down everything you want the puppets to be able to do—and it will become apparent to you what kind of puppets you need to use.”

I asked Monica when it was that she first became interested in puppetry. “I can’t remember not being interested in puppetry,” she said. “My parents were refugees from the Nazis and came to this country just before the war. . . . As soon as the war was over, one the first things my mother did was write to a craftswoman she knew in Germany and order some Kasperle hand puppets.” And so it began.

“I knew I would end up being a freelance artist of some kind or another . . . and my mother, who was a freelance artist, a metal sculptor, told me, ‘If you want to make a living as an artist, you better find something you enjoy doing that other people enjoy paying money for.’ ” And she has.

Monica, with the help of many over the years, has managed to keep her company alive for over four decades—no small feat for a theater! “You just have to become comfortable with the edge,” she chuckles. And you have to love what you do. And she does.

Monica shared a memory with me about one of her favorite performances. Many years ago Eulenspiegel was hired to perform The Devil’s Three Golden Hairs, a Grimm’s folk tale, at a Catholic school in south Chicago. The nuns had expressed some concern that the eighth graders in particular would not be engaged, but they couldn’t have been more wrong.

“Every now and then you get an audience that just sweeps you away, and it was an experience like that,” recalls Monica. “They were probably one of the best audiences that we’ve ever had anywhere.” It’s a magical thing when the artists and audience just flow together.

“At one point,” she said, “my performing partner at the time, Teri Jean, came out in costume as the Devil and sorta harassed the audience.” The kids remained enthralled and sent letters of appreciation after the show.

Monica smiled and said, “One of my favorite letters of all time came from one of those eighth graders. It started out in the normal way, ‘Oh, I loved the show, you’re so talented,’ blah blah blah, then she went on to say, ‘but I would like to know what your mother thinks about what you do for a living. If I did what you do, my mother would kill me.’”

Monica was laughing hard, and added, “We never could figure out whether she was talking about being a puppeteer—or talking about impersonating the devil!!!”

Monica’s mother passed away 19 years ago, but rest assured, she absolutely loved the career Monica chose.

Get involved. Support the arts. Go see some puppets.

For more information on Eulenspiegel Puppets or any of their touring productions, call (319) 627-2487, email monica@puppetspuppets.com, or visit PuppetsPuppets.com.