“Just caught a Nate Staniforth show,” one reporter tweeted after opening night, “and now I have no idea what to believe about anything ever again.” No rabbits. No top hats. No smoke machines. Nate abandons the ubiquitous style-without-substance bravado so often associated with magic and appeals instead to the imagination and intellect of his audience. The journey is wild, visceral, and immediate, and like all great art, encourages us to open our minds and hearts, and see the world in new ways.”

For over a decade, Nate has toured the U.S. college circuit as one of the busiest working magicians in the country. He’s given a TED Talk, lectured at the world-famous Oxford Union, and on January 16, the Harry Potter-famed Bloomsbury Publishing released Nate’s memoir in bookstores worldwide. Here is Real Magic follows Nate’s evolution from obsessed wunderkind to disillusioned wanderer, and tells the story of his rediscovery of astonishment—and the importance of wonder in everyday life—during his trip to the slums of India, where he infiltrated a 3,000-year-old clan of street magicians. Copies of Here is Real Magic will be for sale at the event, and are also available at Prairie Lights Books. 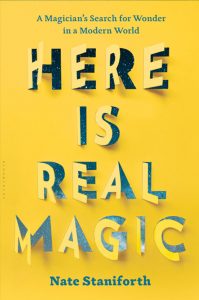 “When you’re young, it’s easy to be amazed,” says Nate Staniforth. “As you get older, that experience of astonishment gets harder and harder to find. Good magic isn’t about deception. It’s about trying to see things the way you saw them before they became ordinary.”

Tickets to see Nate Staniforth this Saturday, February 3, are $20 General Admission, $15 Seniors, and $10 Students. This event is not recommended for children under 13.

"Beat the Bitter" this Week in North Liberty