Iowa City resident Nathan Timmel may be a stand-up comedian, but he also thinks serious thoughts. Those notions undergird his first novel, We Are 100, which he self-published.

The novel follows two FBI agents as they try to stop a series of horrific crimes that are being masterminded by a shadowy figure. The villain’s agenda is to hold those who are greedy, corrupt, and immoral responsible for their actions in a world in which such people seem untouchable.

We Are 100 takes us inside the heads of the good guys and the bad guys—and we soon come to realize that “bad” is a relative and slippery term. Timmel has a tendency to overdescribe personal interactions and the underpinnings of dialogue, a tic that pulls the reader out of the action with some frequency—but not catastrophically.

You’re a comedian and a nonfiction writer, but We Are 100 is a novel, and its serious tone and topicality means it isn’t a laugh riot. What can you tell me about the origin of the book and your desire to write a thriller?

Since stand-up comedy is my full-time job, I wanted to get some of my “non-funny” ideas out there. I’d had a few thoughts bouncing around my head for a while, and I couldn’t figure out how to turn them into jokes. . . . I realized I could find another outlet for the “non-joke” thoughts, and those became We Are 100.

I’m interested in your efforts to inspire the reader’s empathy for the villains of the piece.

Ah, here’s the big “secret”: the whole book really stems from the idea of empathy for the “bad guys.”

I wrote from that point of view, because the main bad guy is based on me. It’s also probably why I didn’t research the FBI, because the “good guys” weren’t my main focus.

More often than not, when someone is writing a book, they tend to make themselves the protagonist, or hero. People want to save the day. If that were the case here, I’d have created a member of law enforcement as my fantasy doppelganger. . . . But nope, many of the thoughts the “bad guys” have are thoughts I’ve had. The thoughts I mentioned earlier that I couldn’t make funny. How would I react if I were placed in any one of their circumstances? What would it take to really push me to the edge? When I had that answer, I had the motivation for Josh, the main black hat. From there, the rest sort of took care of itself.

I’d be reading a book—Jon Krakauer’s Missoula, for example, and that would give me an idea for a “villain’s” motivation.

Basically, the “bad guys” are your average, ordinary citizens, pushed into extreme circumstances. You’re meant to relate to them, because their story could be any of ours. Thus, the book tinkers with your moral compass. You know that what’s happening is technically illegal . . . but is it morally wrong? You have bad guys doing bad things to worse people.

I have to admit, it’s been really neat to see readers not only sympathizing with the “bad guys,” but actually rooting for them. I wasn’t sure how making sympathetic antagonists would turn out, but it seems to be working well.

Why did you decide to self-publish the novel? Did you shop it around first? 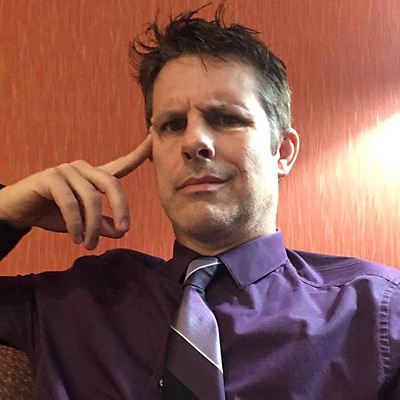 From the outset, I’d planned on self-publishing, if only because that’s how I released my first three books. But this time, things took an interesting twist, thanks to my wife, Lydia.

I didn’t tell anyone I was writing the book, because I didn’t want to be “that guy.” You know, the one perpetually saying they’re writing a book, without ever completing it.

And when I say I didn’t tell anyone, I mean I didn’t even tell Lydia.

Until I was just about three quarters of the way done, that is. Then I told her what I’d been up to. She was leaving on a trip, so she took the incomplete manuscript to read on the plane.

When she returned, Lydia sat me down and said, “Okay, here’s the deal. I’ve always supported your writing, and I’ve always enjoyed it. But this is different. This is really, really good. When I got off the plane I got invited to happy hour with my associates, and I skipped it to finish reading. I could pick up and put down your other books. This one I couldn’t put down.”

She insisted we get an agent and have this published by one of the bigs. I warned her that such a journey wouldn’t be easy, but she said she was up for it.

Unfortunately, the harsh reality of the indifference that people in the “artistic” world face was a rude awakening for her. . . . The two responses we got were: “No one reads fiction anymore. People only read partisan politics books. Echo chamber stuff.” And: “This is really good. Have you tried reading some traditional thrillers, and making it more like that?”

Thus, we were left to DIY, which has its pros and cons.

A huge pro is technology. Today, you can upload everything with the click of a button. Your book, your cover, pictures, everything. You no longer have to print a copy at home, then ship that manuscript to a printer and pray it doesn’t get lost along the way.

Today’s technology also allows for one-off printing, which is huge. Someone orders a book; a book gets printed. Easy-peasy.

I’ve heard more tales than you can shake a stick at from old-school self-published authors who had to order a minimum of 1,000 books, because a smaller run wasn’t worth it for the printer. That’s a healthy investment for anyone to take; thousands of dollars on the hope you can recoup it in sales.

Plus, there’s freedom in self-publishing. No one is second guessing your concept, or telling you to make a character “more likable,” or asking you to add a love triangle. (Or saying your bad guys are too sympathetic.)

The downside to all this, of course, is now everyone has a book to sell. So it’s an incredibly crowded market.

Another drawback to self-publishing is that having an agent or company publishing you gives you clout. The idea that someone took a chance on you means something to buyers. . . .

But those drawbacks aside, after seeing what we were up against in trying to get a major publisher behind us, Lydia came to understand that self-publishing was a viable option. As long as we presented a quality product, what does it matter if it lacks a corporation’s seal of approval?

Iowa, of course, is replete with authors. Do you think of yourself as an “Iowa writer,” and if so, what does that mean to you?

Hmm. I’ve never really tossed that idea around. Now that it is inside my noggin, I’m realizing that first and foremost, I still consider myself a comedian. An Iowa comedian, yes, but a comedian. I look in the mirror and see a stand-up comedian who happens to have written a few books.

What has it been like putting out a novel during the pandemic?

I’m hearing a lot of, “Wow, you wrote a book during the pandemic, good for you! All I did was watch Netflix and get fat.”

Well, guess what? Me too.

The majority of the book was written in 2019. As a comedian, I spend more time than I’d like in hotel rooms. I had so much time on my hands, I figured I’d better use it in a productive way, and started writing. I’d almost finished We Are 100 when the pandemic hit, and that was like hitting a brick wall.

Fortunately for my family, my wife has a good job and could work from home. But as a comedian, my work dried up. We have two young kiddos here, and I became the “head parent.” The prison warden, if you will. My days were filled with a non-stop litany of “Daddy!”

While the Mrs. squared herself away in a makeshift home office and brought home the bacon, I was in charge of the household. Laundry, cleaning, breakfast-lunch-snacks-dinner.

At night, when there was finally peace and quiet, I was too exhausted to focus. I didn’t really finish writing and editing until February of this year, when the kiddos went back to school in person.

When that happened, I felt like Mel Gibson at the end of Braveheart: “Freedom!” (Only without the torture and my death, of course.)

So, my hope is that no one feels intimidated by the fact that I put out a book in the waning days of the pandemic. Trust me, I was as upended as anyone by the whole kerfuffle.

A "Summertime" Classic: The Lexicon of Gershwin's Languid Lullaby