Features, Food, Restaurants and Recipes
2 months ago
by Drew Schoenfeld
0

There’s no doubt that livestock farming plays a significant role in climate change. According to the United Nations Food and Agriculture Organization (FAO), the sector accounts for nearly one sixth of all human-caused greenhouse gas emissions. Livestock farming also contributes substantially to land use and deforestation, and is accountable for one quarter1 of our total freshwater usage annually. The rate of resource depletion is only expected to accelerate, as some experts predict global meat consumption to increase as much as 72 percent by 2050 (from 2000 levels). Accounting for these factors, it is likely that environmental constraints will demand that the meat industry radically adapt in the coming decades. Let’s explore the future of meat and the alternatives that show potential to mitigate its environmental impact.

What’s on the Table?

With the emergence of companies like Beyond Meat and Impossible Foods, the race to develop meat substitutes has accelerated dramatically in recent years. These brands represent only a fraction of the alternative meat market, which is presently valued at $13 billion (Future Market Insights) and encompasses a range of soy, wheat, mushroom, and other plant-based products.

So when it comes to environmental impact, how do these foods stack up against each other and against meat? Whether we’re considering an animal product, a plant-based alternative, or any other protein source, the impact tends to fit into three categories:

This is not to say that environmental concerns are the only priority; when assessing food choices, we should take into account animal treatment as well as human health and nutrition considerations. With this in mind, we can take a look into the impacts of different options.

One of the most important factors in environmental impact is how resource intensive a given food source is. Livestock is generally more resource intensive because animal feed takes additional resources to grow. In fact, more than 97 percent2 of water usage in the livestock sector comes from the production of animal feed alone.

Many have pointed out that animals are efficient at converting inedible plant products into food humans can eat (in the form of meat). For this reason, livestock farming has some potential benefits. However, nearly 14 percent of animal feed is still sourced from human-edible foods (FAO), leaving potential for improvement.

Using agricultural resources wisely is one important step in preventing wasteful behavior. Solutions in this area could play a key role in mitigating meat’s environmental impact in the future. One UK-Dutch company called Deep Branch is already addressing this feedstock problem by using carbon dioxide, microbes, and fermentation to make animal feed with lower carbon emissions and lower water usage. 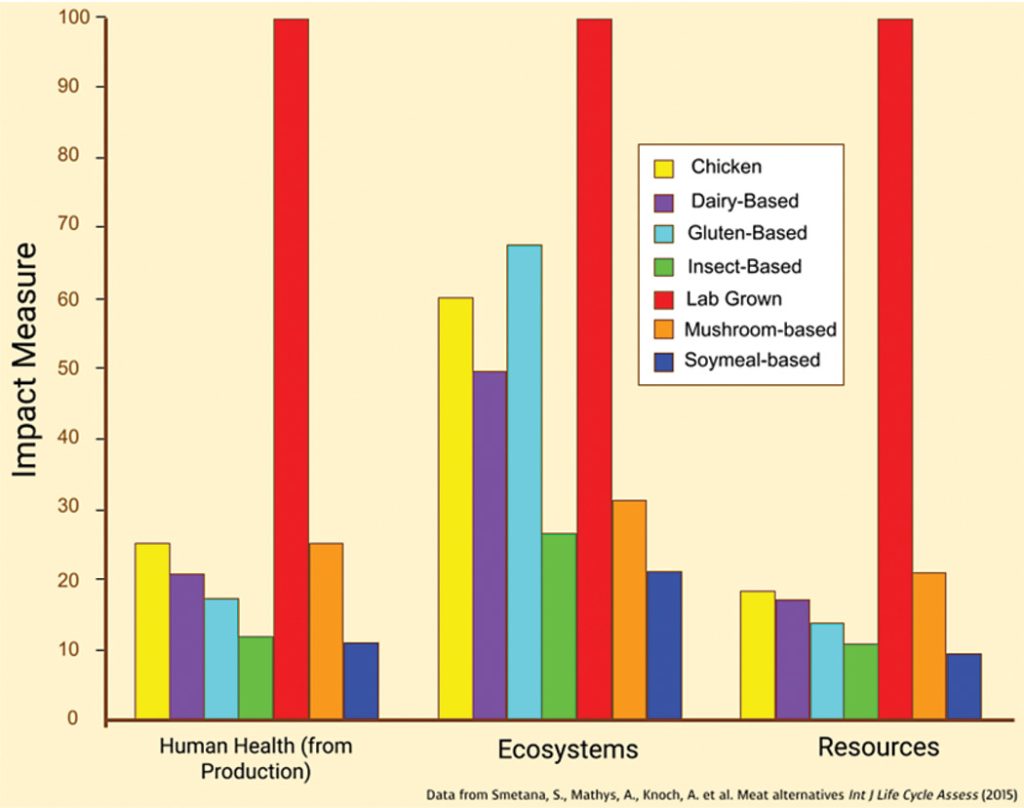 When it comes to impact, not all foods are created equal. One 2015 study from the International Journal of Life Cycle Assessment3 compared the resource use, ecosystem impact, and human health impact from the production of meat alternatives. The study also included chicken (one of the more environmentally friendly meats) for comparison.

Of the foods studied, soy-based and insect-based products had the lowest impacts, and some of the worst performance came from gluten and dairy-based meat alternatives.

Lab-grown meat had the highest impact at the time of the study, mostly because its technology is still in early stages of development. A more recent 2021 study published from CE Delft has found that when renewable energy is used, lab-cultivated meats have a substantially lower impact than many other meat products.

New companies are also showing promise. Solar Foods is cultivating a protein source from microbes using fermentation. And to lower the retail cost of cultivated meats, SCiFi Foods is introducing “hybrid” products, which have only partially cultivated content to maintain the taste and texture of real meat with a lower environmental impact.

While innovation will continue to take place in livestock farming and meat alternatives, it is unlikely that these advances alone will be sufficient without some changes in meat consumption overall. Luckily, the success of new and better substitutes will make less-meaty diets manageable and appealing for more people. As we look ahead to the future of meat, choosing the right food source, growing methods, and healthy amounts are all crucial to forming a truly regenerative economy for future generations.

Isaac Hamlet: The Long Road to Writing a Fantasy Series

Top Financial Risks: Everything You Never Wanted To Know About What Could Go Wrong