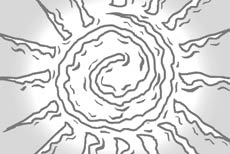 “We are charged with designing the future, not being victims of it.”
—R. Buckminster Fuller

Someone recently forwarded me an article about the dim prospects and essential impracticality of the use of solar energy. One conclusion was that we would never get more than 5 to 10 percent of our energy needs from solar energy.

Well, for the last 10 years my neighbors and I have had 100 percent of our electric power delivered abundantly by solar energy. And don’t forget that all of nature has been operating exclusively on solar energy for billions of years. Nature’s systems that clean our air and water, maintain the fertility of the land, moderate the climate, and create the complex web of life on earth require thousands of times the energy used by man, yet operate exclusively on solar energy.

Here are 10 more common misconceptions about the use of solar energy from the 100th issue of Home Power magazine.

My wife is often irritated by people who attempt to console her about the rough life she must live without grid power. Our solar home has all of the conveniences that we want. Solar energy provides the electricity to run the computer that I am writing this article on, it pumps our water, it entertains us with audio and video, it washes our clothes, it bakes our bread, it powers our refrigerator and freezer, it powers our Internet and telephone communications (we are even setting up and powering a high-speed wireless network for our neighborhood), it runs our power tools, and it lights up our nights. Solar heat extends the season in our greenhouse, allowing us to eat something fresh every day of the year without burning fossil fuels.

Studies for utility-scale wind machine have found that these massive turbines kill less than two birds per turbine per year. The effect of home-size wind turbines on birds is less than from large turbines, and researchers do not consider the issue significant enough to study.

There are two major types of solar panel technologies. One uses the light of the sun to make electricity, the other captures the sun’s heat to provide hot water or air. Solar hot water panels are usually about 4 by 8 feet and look like very shallow rectangular boxes. They have been in use since the early 1900s.

The second type of solar panel is the solar electric or photovoltaic panel. These panels use the sun’s light to make electricity. With no moving parts, nothing is used up in the process and they have a very long life. Richard Komp, a PV researcher and president of the Maine Solar Energy Society, tested solar cells made in 1839 and found they still put out the same power that they did then. So you can get hot water from the sun’s heat, and electricity from the sun’s light.

Myth #4: It takes more energy to produce PVs than they can ever produce

According to an article published by the National Renewable Energy Lab (NREL), today’s solar electric modules have an energy payback of two to four years. PV panels come with 25-year warranties, and can be expected to still be producing power in 50 years. So PV panels will create 10 times or more energy than is required to make them.

Myth #5: Solar-electric module production is toxic to the environment

Most solar electric modules are made of silicon, and the process is similar to the one used to make the silicon chips in your computer. Both processes take place in high-tech factories and involve potentially toxic chemicals. The National Renewable Energy Lab (NREL) has researched the environmental hazards associated with manufacturing PV panels and concluded that the risks are far less than those in most major industries, and all these risks fall well within the range already protected by OSHA and similar regulations.

When you compare the environmental impact of solar-electric technology to traditional energy sources like coal, oil, and nuclear, PV comes out on top, hands down. Fossil fuel, nuclear, or solar—which energy source would you want in your backyard?

Myth #6: Solar electricity is too expensive

All new power plants are expensive. One thing that keeps the cost of energy low is that many of our power plants and dams were built 50 or more years ago. If we used energy wisely, the money we’d save from implementing all the cost-effective energy-saving technologies available today (which U.S. government agencies estimate would save $345 billion dollars per year) would pay for the transition to a solar-based energy system.

Huge subsidies exist for conventional energy systems, and each year we continue to spend more on R&D for these technologies than for renewables. But in most places, if you are building more than a quarter-mile from a utility connection, it’s cheaper right from the start to install solar electricity.

A hundred years ago, public policy structures were developed to make fossil and nuclear electricity affordable and universally available. The same can be done for renewables, with large economic and environmental benefits.

Myth #7: You can’t use solar energy in far northern latitudes

The current shortage of solar-electric modules in the U.S. has come about because they are all being bought up by Germany (the world’s second largest user of solar-generated electricity), which is located between 48 to 54 degrees latitude, further north than any place in the U.S. Cloudy and cold places in the U.S. like Maine and the Pacific Northwest have lots of solar-heated and -powered buildings. One island off the coast of Maine has been mostly solar powered since the 1980s.

Iowa has abundant solar resources, including wind (Iowa’s wind potential is the 10th largest of the 50 states) and biomass. Iowa could be an energy exporting state (creating huge opportunities, with lots of interesting and profitable things for young people to do) and keep billions of dollars here. If we became an energy exporting state, we could also export the knowledge of how to do this.

Myth #8: Lead-acid batteries wind up as toxic disasters in our landfills

There are no documented instances of injury or death to utility workers from grid-connected solar-energy systems. Lineworkers have been killed by improperly connected fossil-fueled engine generators, which many people use during power outages. Engine generators do not have the sophisticated electronics that grid intertied inverters do. Grid intertie inverters are required to have a number of redundant safety features, and most will not operate at all without utility power present. In addition, lineworkers use safety procedures like grounding any potentially energized conductors before performing line maintenance. Solar-generated electrical systems have a strong safety record.

This myth is so pervasive that I designed the energy system at my home to provide reliable power without a back-up generator. Solar, wind power, and normal prudence in the use of electrical energy have provided 100 percent of my electrical needs for the last 12 years. I have also lived for years with 100 percent solar on a boat and in Hawaii. While it is true that most solar-heating systems have a conventional back-up heating system, it isn’t absolutely necessary.

Hydrogen fuel cells produce clean and quiet DC electricity from hydrogen. But where does this hydrogen come from? Hydrogen needs to be stripped from hydrocarbons (fossil fuels) or split from water. These operations take energy and equipment. If the energy comes from fossil fuels (as most schemes propose), then we are putting our future toward more non-renewable energy, with a high-tech twist. Fuel cells can have a place in a solar-based economy, but the hydrogen must be supplied from renewable-energy driven processes.

Solar energy is abundant and democratically distributed. We can profitably save 75 to 90 percent of the energy our economy uses. If we did this, we could take the money we save and transition to a renewables- and solar-based economy. Then we could get rich showing the rest of the world how to do this. An energy independence project like this would provide decades of full employment, increase national security, and has the potential to invigorate rural economies.

This kind of project seems to have wide appeal across the political spectrum, but so far is not part of the political debate. I believe the politician who puts forth this grand and practical vision will have broad popular support.

Why Corn-Burning and Wood-Pellet Stoves are So Popular

Power Your Home With Wind & Sun