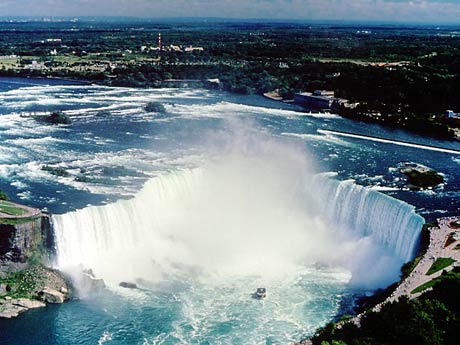 The spectacular 170-foot drop of Niagara falls attracts millions of visitors each year.

Tens of millions of tourists descend on Niagara Falls, Canada, each year, from countries as distant as Australia and China. One afternoon in May, I decided to see if they were on to anything.

Niagara Falls is one of the weirdest places in North America—but also one of the most spectacular. Where else can you find gigantic waterfalls, Buddhist stupas, sex shops, haunted houses, amazing Asian cuisine, quaint bed and breakfasts, and pristine gardens all within walking distance? And that’s just skimming the surface.

The most obvious motivation for visiting the area is, of course, to check out the falls. After all, it’s pretty neat to see Lake Erie draining itself like a big old bathtub into Lake Ontario, via 170-foot drop. Some six million cubic feet of water hurtle over the crest-line of Horseshoe Falls (the Canadian waterfall) every minute, which, if you do the math, is equivalent to about 1 million bathtubs-full. That’s one impressive soak.

You can view the falls while strolling on a walkway, gliding on a Spanish aerocar, or cruising far overhead in a helicopter. The adventurous can even take a guided tour behind the roaring wall of water. And if you’re up to shelling out ten bucks, you can join the hordes of tourists who wrap up in plastic ponchos and tug-boat their way right up to the face of the falls. The Maid of the Mist is a money-making tourist-trap to be sure, but I highly recommend the ride. On a good day, you’ll see imposing limestone cliffs, lush greenery, and sky as blue as Superman’s tights. You’ll be pinned to the rails by the beauty of the falls, and you’ll laugh as they spray water in your face. It’s always humbling to experience the awesome power of Nature firsthand, and besides, you get to keep the tacky poncho. It could come in handy if you live somewhere rainy (like, say, Iowa).

Horseshoe Falls has a wacky history of daredevils—those extremely brave and/or demented individuals who went over the falls of their own volition—which I think bears mentioning. But first, some perspective. The falls are approximately 170 feet high, and the river at its base is 184 feet. This means that anyone who goes over the edge is, in effect, plummeting down a wet and thundering 17-story building into a roiling swimming pool of approximately the same depth. That said, on to the Daredevil Chronicles.

Annie Taylor started it all. On October 24, 1901, this 63-year-old Michigan schoolteacher strapped herself into a special harness inside a wooden barrel and, with newspaper crews and bystanders gaping, took the plunge. Slammed this way and that by the rapids, the dazed but triumphant Annie surfaced 20 minutes later and slurred, “No one ought ever do that again.”

Bobby Leach and Charles Stephens should have taken her advice. These two Brits both took their turns barreling over the falls in the early 80s on separate occasions. Stephens’ barrel sunk to the river bottom, and he along with it. They later found his tattooed arm washed up on the shore. Leach spent six months recuperating in the Intensive Care Unit after his stint. A string of about a dozen other fame-seeking adrenaline-junkies followed, many of whom were also fined by the government for their trouble (if, in fact, they survived). And here’s the kicker: in 1960 a seven-year-old boy accidentally fell into the drink and went over the falls protected by nothing but his bathing-suit. He emerged completely unscathed.

But enough about the falls. The city itself is just teeming with wonderful and wacky attractions. Clifton Hill, for example, boasts a strip of neon whose electricity bill probably rivals that of Vegas (okay, I’m exaggerating). There are slot machines, casino facilities, haunted houses, “alien encounters” freak-shows, and places like the Ripley’s Believe It or Not Museum, where parties interested can “See a genuine shrunken head and learn the secret process used to shrink it.” Just what you’ve always wanted. There is also a wax museum Rock ’n’ Roll Hall of Fame, and one for Criminals as well. Most of this stuff seemed pretty grisly to me, but the teeny-boppers love it.

If you’re more of a nature buff, you might want to stop by the Botanical Gardens, where you’ll find 100 acres of impeccably groomed gardens. Or follow your nose to the Fragrance Garden at the Niagara Parks Greenhouse, where plants are selected for their unusual textures, tastes, and aromas. If, however, you prefer to experience Nature before the manicure, you can hike in the gorge that stretches seven miles from the base of the falls. You can also pitch your tent in one of the region’s many campgrounds.

Other spots of interest include the Skylon Tower (hoist yourself 775 feet in the air for a Canada-goose-eye view of the falls) and heritage sites, where you can learn about some of the bloodiest and most inane territorial battles in human history. Take the War of 1812, for example. Apparently, this was a little dispute between the U.S. and the British troops over who got to keep what on the Niagara Frontier. After two years of bloodshed all along the Canadian border, in the Chesapeake Bay region, and along the Gulf of Mexico, the armies were back where they started and everyone who was left decided maybe they should just sign a peace treaty and call it a day.

You can treat yourself to some pretty good eating in Niagara Falls, if you know where to go. There’s the usual slew of fast food chains and “family dining” type restaurants, but if you’re up for something different, try one of the Asian restaurants. And of course, there’s no end to the fudge-houses, ice-cream booths, and sweet shops in general.

Accommodations are easy to come by (but book ahead), and for a fairly reasonable price, you can find a decent hotel or motel room. The Niagara Parkway, with its string of cozy Bed and Breakfasts, is a well-known hot spot for honeymooners. The well-maintained Victorian buildings offer charming rooms and the Niagara Wine Region is just a quick drive down the road, so lovers can stock up on bubbly. In fact, because the Niagara region is located in the fruit belt of Ontario, the area is pretty Dionysian in its bounty during summer months. A final note on the B&Bs: the prices can run a bit steep (around $100 per night for two people). But for the bountiful, home-cooked breakfasts and the rustic ambiance, it’s probably worth the extra cash.

Avid people-watchers will be fascinated by the incredible diversity of visitors who make their way to Niagara Falls. Animated French Canadian tourists come by the truckloads, in 18-wheelers sporting names like “Tour Monde,” and “La Quebecoise.” Asian tour buses are common as well, filled with passengers carrying stacks of high-quality filming equipment. There are Europeans in stylish scarves and heels, and Europeans in wool socks and Birkenstocks. There are droves of school kids and packs of teenagers. There are elderly couples strolling through the parks.

I think the most paradoxical discovery I stumbled across in Niagara Falls was a large Buddhist temple tucked in beside a hotel on the Niagara Parkway. Home of the Buddhist Association of Canada, the Cham Shan Temple warmly welcomes visitors. Entering the stupa, I slipped off my sandals and left my camera at the entrance, as requested by a small cardboard sign on the door. It was the first time I’d been reminded to show respect for anything all day.

Inside, the air was heady with jasmine and sandalwood. The walls were lined with hundreds of golden Buddha statues reposing on yellow hardware store shelves. The concrete was cool beneath my feet as I walked past prayer cushions, large gongs and drums, and even larger deity statues. A woman—I assume she was a Buddhist nun because of her flowing black clothes—gently arranged fruit, flowers, and candles on a long altar. It was the most relaxed I’d felt all day.

But then I heard a blasted cell phone ringing. I spun around to pierce the offending tourist with a glare, and seeing no guilty parties, reeled back in time to espy the woman at the altar bringing a receiver to her ear. “Hello?” she said loudly, “Oh yes, helloooo, hi there!” It was then that I noticed that beside the offerings lay a small, battery-operated cassette player that emanated recorded chantings. I had to laugh.

Clearly, Niagara Falls is a city built on paradoxes. Each day the age-old “Man vs. Nature” war is waged anew, as can be seen in the thick, electrical cables that wind through tree trunks so tourists can see sculpted gardens past sunset. There is breathtaking beauty and indisputable cheesiness. There are toy stores for imaginative kids, and there are lovers’ boutiques for even more imaginative adults. In spite of these polar extremes (or perhaps because of them), the city thrives year after year. Or maybe, as some people muse, Niagara Falls is in fact a geographical area permeated with an unfathomable, concentrated spiritual power that subtly impels tourists to make pilgrimages year after year. In any case, I’d say it’s a pilgrimage worth making.

Poems from Guantanamo, Sept 07 | Poetry by Guantanamo Detainees Finds Its Way to Print