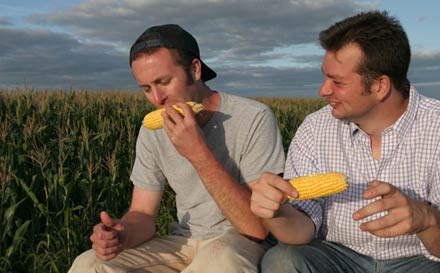 King Corn filmmakers Ian Cheney and Curt Ellis grew an acre of corn and then traced its infiltration through our food system (PHOTO: Sam Cullman)

There’s an old adage that the best way to communicate a message is to show someone a problem rather than tell them about it. An excellent example is King Corn, a documentary released last year about the negative impacts of America’s corn-based food supply. Instead of preaching to the audience about the problems, the filmmakers simply show them in an almost understated, yet more powerful way.

King Corn’s premise is simple: two college friends, Ian Cheney and Curt Ellis, want to know how our food is produced. They discover that corn constitutes a major part of the average American diet, so they decide to grow an acre of corn in Iowa and track where the corn goes.

The things they discover along the way aren’t so appetizing. Ellis puts his hand into a hole in the stomach of a live cow to demonstrate the negative health impacts of feeding corn to animals. A Brooklyn taxi driver describes how he weighed 300 pounds from drinking soft drinks containing high-fructose corn syrup. An auction is held to sell the farm and possessions of the Iowa farmer who befriends Cheney and Ellis and allows them to grown an acre of corn on his farmland.

The film follows Cheney and Ellis over an 18-month period starting in January 2004. They write to Charles Pyatt, a farmer in Greene, Iowa (population 1015), asking if they can plant an acre of corn on his farm. The two travel to Iowa and meet with Pyatt to plan their corn acre. Some of the local folks are amused by the Yale graduates’ plans to try their hands at farming, but the two seem to endear themselves to the locals.

The film shows the month-to-month progress of their acre, from spring planting through fall harvest. The two did all the work with help from local farmers, driving tractors, spraying anhydrous ammonia fertilizer, planting seeds (which took just 18 minutes), spraying herbicides, and harvesting and delivering the corn to the local grain elevator.

A film about corn made by East Coast filmmakers could have easily been condescending, but King Corn is respectful and sympathetic to Iowa’s farmers and the challenges they face.

There are interviews with farmers and family members who express concerns about modern industrial agriculture. Rich Johnson, a farmer who runs several large farms in the area, says, “Farms are getting bigger and have to be a good size or you get squeezed out.” There are shots of homes abandoned by family farmers forced to sell out. Another farmer, Don Clikeman, says ruefully, “It makes it easier to farm if you don’t have all these houses in the way.”

King Corn is a coming home of sorts for both Cheney and Ellis. By an interesting coincidence, both have ancestors in Greene. Their great grandfathers, Claire Eugene Cheney and Melvin Ellis, grew up in the area and worked in agriculture. “It’s a coincidence that we became friends and that our ancestors came from this tiny Iowa town,” says Ellis.

Tracking the history of corn in American agriculture, the film shows how U.S. Agricultural Secretary Earl Butz, under Richard Nixon, changed U.S. farm policy to one based on increased production, planting corn “fence row to fence row.” Humorous animations using corn kernels and toy farms trace the history of corn from southern Mexico and show how farms got bigger and bigger.

King Corn follows Cheney and Ellis as they visit cattle ranchers and large feedlots in Colorado, where cattle are raised on a corn-based diet and confined in small pens. They travel to Brooklyn and meet Trey Mendez, a taxi driver, who describes his problems with obesity and diabetes from drinking too many soft drinks. They meet university experts in grain and cattle production, such as Loren Cordain at the University of Colorado, who says that a steak from a corn-fed cow contains 9 grams of saturated fat compared to the 1.5 grams from a steak of a grass-fed cow. Finally, they meet an elderly Earl Butz, who remains convinced that his policy shift in the 1970s was for the best.

The film adds humor to lighten a heavy topic. Cheney and Ellis play baseball when not farming. After being denied access to corn-refining plants that make high-fructose corn syrup, the two decide to make it themselves in a kitchen. “It tastes great,” says Cheney, spitting out the homemade syrup. They both sample an ear of corn from their acre. “It’s disgusting,” says Ellis. Later, he slides down a mountain of corn piled outside a grain elevator like a child sliding down a muddy hill.

We learn along with Cheney and Ellis about the problems with America’s corn-based agriculture. “We live in a time when abundance brings too much,” says Cheney.

The film ends on a sad note. Six months after their harvest, Cheney and Ellis return to Pyatt’s farm to find it being auctioned off. The filmmakers ask Pyatt if they can buy their acre, and in the final scene, the two play baseball on their acre, now planted in grass, surrounded by corn.

King Corn leaves the audience to question America’s annual, massive corn harvest, which reached 92 million acres in 2007. Why are we growing so much corn? Why is it so heavily subsidized by the government? Why are we producing so much high-fructose corn syrup if it increases the risk of obesity and diabetes? Why are we feeding cows and other animals corn if it makes them ill and produces less than healthy meat for humans?

By shedding light on the questionable practices of America’s corn-based food and feed supply, King Corn could help to create a dialogue and become a catalyst for positive changes in U.S. agriculture.

What was your main motivation for making the film?

Ian Cheney: Our goal was to learn how our food was produced. By planting corn and following it through the food chain, we gained a good understanding that a big bulk of our calories comes from corn. Livestock in confined animal feeding operations (CAFOs) are fed corn, and there is corn in many food ingredients and food additives, such as high-fructose corn syrup.

What did you learn in the process of making the film?

Cheney: Our enthusiasm for this crop has taken us too far. We produce an enormous amount of corn. We have harvests that surpass our ability to store it and have to come up with new uses, such as food ingredients.

Cheap corn has enabled our food system to become industrialized and become dependent on CAFOs. It has allowed us to create an unhealthy food environment, one that has been profitable for food processors and for the health care industry. It’s not what anyone intended, but it’s what we’ve ended up with.

Is corn to blame for our current problems?

Cheney: Corn isn’t the problem. It’s a symbol of how industrialized our food system is.

There are good uses for corn if we grow it efficiently, using less fuel and pesticides and no genetic engineering. It will play a sustainable role in our food supply. But I don’t think it’s the right thing to feed cows, and there is no need to create a cheap sweetener from it.

What purpose do you hope the film achieves?

Cheney: Our hope was to suggest that we put real energy into imaging alternatives to this monolithic system we’ve created; that we see a lot of alternatives, such as organic. The growth of organics is a good sign. And creating shorter food chains, so we know where our food comes from, and we can trace it.

What were some challenges in making the film?
Cheney: The biggest challenge was deciding which stories to include. It surprised us that one acre of corn touched as many avenues as it did. We were surprised by the nitrogen fertilizer run-off into the Gulf of Mexico and by the contamination problems caused by genetically modified corn in Oaxaca.
Another challenge was getting access to where food is produced. We were denied access to high-fructose corn syrup plants and slaughterhouses. Herbicide manufacturers ignored our calls.
As a consumer, I feel that I should be able to find out where my food comes from. There is tremendous opacity in the food system between the consumers and food manufacturers. There’s a real desire to keep consumers from the sources of their food. The stories behind our food are not appetizing.

People of my generation, who are five or six years out of college, feel disconnected from farms.

Why did you choose to grow genetically modified Liberty Link corn on your acre?

Cheney: We wanted to grown corn the way most our neighbors were growing corn, and most of them were growing GM corn.

What has been the reaction to the film?

Cheney: We’ve gotten a good response though we haven’t gotten as much flak as we expected. We’re eager for controversy and debate. I think it’s because the film is evenhanded; we’re not pointing fingers.

One complaint is that we don’t offer solutions. It’s a valid complaint; there are solutions, but we don’t have room for them in the film. Our goal was to raise questions.

What solutions do you see to the problems of industrial agriculture?

Cheney: We have to accept the logic of biodiversity, of diversity in the food supply. The answer lies in finding alternatives, many alternatives, and not easy answers tacked onto the end of a documentary. Rather than tacking on a prescription, I would hope that our film helps in bolstering alternatives and creating sustainability.

Unforgettable Meals: Stories from our Readers