Italy’s Arena di Verona is the site for summer opera, like this production of Aida. (photo by C. Jonathan Edwards)

My world-traveler husband and I were having lunch on a rainy September day in 2002 at a café in Verona (Romeo and Juliet’s hometown). From our seats under the awning, within reach of the opportunistic umbrella vendors who were periodically shooed away, we looked across the stone plaza to a nearly 2,000-year-old coliseum. Unlike Rome’s, the coliseum in Verona is completely intact.

Curious about the coliseum, we asked our waiter, “What do you do with it?” He explained that for years they’d been holding outdoor operas. “Next time, you should come in the summer so you can go,” he remarked in an offhanded way. We saw postcards showing a birds-eye view of the arena opening night as every member of the audience held a candle and tried to imagine ourselves in the crowd. When Italy reappeared on our itinerary, we both had the same thought: we should see an opera in Verona.

Considering that the Arena di Verona (as it is known locally) seats 5,000, including pricey reserved folding chairs down in the oval, we knew it would be a big event, but we didn’t know how big. While I don’t consider myself an authority on opera, I’ve seen over a dozen covering a wide range of the greatest hits. I do know enough to find out the ending before I buy tickets and that tragedies are easier to follow without supertitle translation than comedies. Choosing among the summer’s five offerings, one splashy gem stood out—Aida.

As a college freshman I’d heard about it in music appreciation class and couldn’t quite believe the professor’s description of this opera as one that sometimes includes elephants, giraffes, and plenty of horses for the parade of triumph. Verdi’s opera premiered in 1871 in Cairo, drawing on an ancient legend that forces an Ethiopian princess to choose between love and loyalty. I didn’t know when we ordered the tickets that Aida was the very first opera presented in the arena, because the director agreed that the epic story suited this colossal venue.

This is the 87th season for summer opera, which is advertised on train platforms, side of buses, and elsewhere. We found lots of people blogging about arena opera on the European travel sites. It seemed best to buy the least expensive tickets for general admission seating, which put us in the top 20 rows. We were advised to show up when the gates open at 7:30 p.m. The orchestra didn’t start warming up until 9 p.m., but we were supplied by a number of vocal vendors calling out “Cushini” (cushions for rent) with vino blanche (chilled white wine.) It puzzled me that the lady selling Nestle ice cream bars also called out “gelato” until I realized that’s the closest Italian translation. There was plenty of atmosphere to absorb—old friends catching up, families picnicking, tourists like us clicking their cameras—while we waited for curtain time.

Of course, there was no curtain, since the open stage had no proscenium. A shirtless Egyptian strode onto the stage and banged his gong at the beginning of every act to encourage us to take our seats and again to make the conversations fade into silence. When the orchestra swelled, the crowd hushed and the title character began her song of longing for her homeland. As quietly as I could, I attempted to ask my husband a question. “Shhhhhhhhhhh!” The sound came from all directions; halfway into my sentence, every opera fan within earshot let me know whispering was not okay. 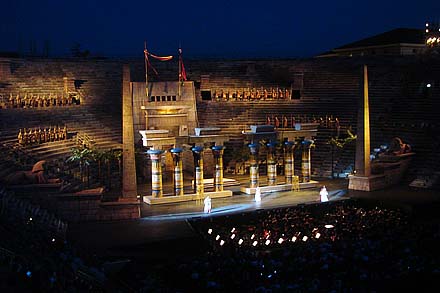 Act 1 of Aida in the 2000-year-old coliseum in Verona, Italy. (photo by C. Jonathan Edwards)

Not wanting to further alienate any passionate Italians, I closed my mouth and reverted to scribbling a note. Then I could finally relax into the music—beautiful slave girl who is really a princess, brave handsome warrior, and two domineering royal fathers. The cast numbered over 200—feather dancers seeking divinations at the temple, a forest of palm trees, a dozen horses, and some of the best voices in Europe letting their voices soar without microphones and taking our hearts with them.

I was transfixed by the beautiful music, grand sets, and the power of the story, but also by the historic structure I was sitting in, the intense power of attention generated by thousands of fans eager to receive this elusive gift of beauty. When the house lights came up after Act 1, I agreed to hold down the fort for my group if they would return with some red wine. This let me stretch my legs across our entire five feet of marble bench before they returned with wine and a gorgonzola and walnut pizza! It’s not my usual opera intermission fare, but “when in Italy. . . .”

And so it continued for act after act—soldiers bearing torches marched from the ancient doorways up to the final empty step behind the stage, ambitious officer in love with the slave girl forced to marry Egyptian princess instead. In Act III I recognized the initial fanfare as the soldiers returned triumphant from battle, complete with an extra dozen trumpeters stage right. (In these times of animal rights, I can forgive the lack of elephants and giraffes, since the horses looked so graceful as they bowed on stage.) Aida finds her father among the prisoners of war, which should be a joyful reunion, but he doesn’t exactly approve of the Egyptian she’s fallen for. And finally, the elaborate two-level set where Aida and her lover are buried alive in the Temple of Vulcan for betraying Egypt, certain they will spend eternity together.

One surprise in Italian-styled opera was that at the end of every act the featured soloists would break character and enjoy extended curtain calls. The unforgiving father seconds before was now all smiles, graciously leading the soprano to right, left, and center to acknowledge her adoring public. At the end of that particularly emotional duet, in the split second before the applause crashed forth we heard a single “Brava! Bravo!” praising first her and then his exquisite singing.

I got friendly with the two older Italian ladies sitting next to me, despite our limited language overlap. I showed them the paperback Aida picture book I’d brought and offered them some of my pistachios. They responded with compliments, a few remarks about the warm night, and lemon drops, after I watched their seats when they ventured down to the restroom trailers by the gate.

The principle singers enjoyed their final curtain call at 1:16 a.m. The stage was so immense it made separate curtain calls impractical, so the crowd just kept clapping and the singers kept bowing for at least ten minutes. Our little family wandered out with the crowd, spilling all over the plaza in a riot of music-fueled bliss. We got more gelatos and cold melon to sustain us for the one-kilometer promenade to the hotel.

Ever hear Codex Leicester? It’s the most expensive book ever sold. In 2002 (the year of our first trip to Italy) Bill Gates had made headlines for spending over $30 million for this handwritten manuscript, one of Leonardo di Vinci’s journals.

In these pricy pages, Leonardo recorded a fossil in the granite slab he was sitting on and speculated that the mountain where the stone was quarried was once under the ocean. And where did he have this important scientific revelation? Attending some sporting event at Arena di Verona . . . so we were pretty excited to see a shrimp preserved in granite ourselves. Maybe it’s the same one?

Well Read Books: A Grab Bag of Treasures for Bibliophiles