It’s a triple whammy—headlining the November 14 David Lynch Foundation concert in Fairfield are Laura Dawn with The Little Death, plus perennial favorite Donovan, AND very special guest. . .  James McCartney, who will be making his debut performance under his own name.  He’ll be bringing his band Light here from England. James, who is a vegan, visited Fairfield over the summer and reportedly loved the town and the people he met. It’s an honor to have have him perform here for us.

Two shows are in the works, one at 7:00 p.m. for students, and a second concert at 9:15 p.m. for the general public, both on Saturday, November 14. No ticket information yet, but we’ll keep you posted.

Singer/songwriter Laura Dawn is an Iowa girl, born in the small town of Pleasantville. She headed for NYC when she was 21 and released her first album in 1999. She’s the front woman for Moby’s “punk-rock fueled blues band” The Little Death, with Aaron Brooks on drums, Daron Murphy (her husband) on guitar, and of course Moby on bass and guitar (although he’s on tour now and won’t be here for the Fairfield concert).

Of the magnetic chanteuse Laura Dawn, music writer James Moore says, “Laura’s voice has this divinely lived-in smoked-whisky quality that has drawn comparisons to Janis Joplin and Dusty Springfield, among others, but it is much more supple in some ways.” Read the full article in the November issue! 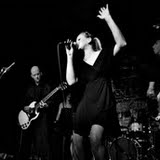 Annie Nocenti of The Brooklyn Rail calls The Little Death “one of New York’s best-kept sultry secrets . . . top notch players and volcanic generosity . . . singer Laura Dawn’s staging and rocket-fuel is punk . . . and her powerhouse voice channels blues and gospel. . . . She’s a riveting performer, her own blend of Tina Turner and Janis Joplin . . .”

We’ll be posting more information as soon as it’s out, promise!

Crabs in a Bucket