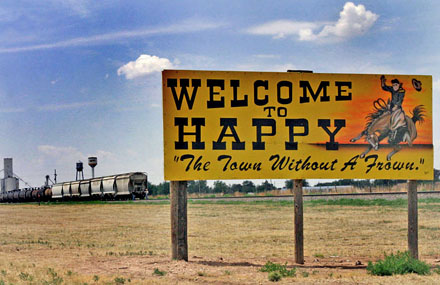 Filmmaker Andrew Shapter found that the happiest people are those who actively contribute to the well-being of their communities.

Life, liberty, and the pursuit of happiness. Most every American knows these words, and knows these concepts were important enough for Thomas Jefferson to write them into the Declaration of Independence.

Two hundred some-odd years later, what exactly does the pursuit of happiness look like? Austin, Texas-based photographer and filmmaker Andrew Shapter (no relation) set about answering that question in a cross-country road trip dedicated to finding out exactly what makes Americans happy. The result is the critically acclaimed documentarian’s latest film, Happiness Is, showing for one night at the Sondheim Center in Fairfield on Tuesday, December 8. The screening is part of a nationwide tour and proceeds will benefit the Fairfield chapter of Habitat for Humanity.

Andrew Shapter knows a little himself about the pursuit of happiness. Born in Fort Worth, Texas, Shapter was given his first opportunity with a camera at age 12. But after majoring in political science at Texas State University, Shapter found himself in Washington, D.C., working in politics and not traveling far down the road towards his own happiness. He made his way back to Texas, where he returned to his love of photography, establishing himself as a fashion and music photographer and eventually expanding to filmmaking. His 2006 documentary, Before the Music Dies, is an unflinching look at the popular music industry.

For his latest cinematic exploration, Shapter loaded up his van and crew, talking along the way to everyone from “happiness experts” and university professors to artists on the street, from iconic rock stars to the chief political strategist for the Bush campaign, from young children to octogenarians. Shapter starts by defining happiness, and moves to pursuing and eventually finding happiness, exploring the roles material goods, community, work, and faith play in the equation.

While many of the people interviewed for the film were chosen specifically for their research on happiness, a significant portion of the cast are folks Shapter and his crew stumbled upon along their coast-to-coast journey. A few segments of the film have been animated to protect the identity of folks who weren’t terribly thrilled about being interviewed. But the overwhelming majority were, forgive the redundancy, happy to share their views on happiness.

The results of these interviews are not particularly startling. As the film deconstructs happiness myths through the “arrival fallacy” and a concept called the “hedonic treadmill,” it comes as no surprise that rampant consumerism has not made Americans the happiest people in the world.  But the colorful conversations and rich thoughts shared by such a wide range of characters are well worth the journey the film makes. Shapter says that his goal was “to find common ground and a common voice throughout all of the different cultures that live in the U.S.” and he clearly finds this common voice in the film.

Happiness Is draws beautifully from the wisdom of such luminaries as the Dalai Lama and author Dan Millman (Way of the Peaceful Warrior), as well as musicians John Mellencamp and Willie Nelson. But it is in the conversations with lesser known people, people like a wood sculptor named Chuck and Joe the hops farmer, where the film really shines. The scene of 95-year old Pinetop Perkins playing and singing “How Long Blues” at the piano in his home, a cigarette burning in an ashtray at the edge of the bass end, sums up all the scholarly wisdom of the happiness experts in one moment of subtly joyful brilliance.

Ultimately, the film’s message lies in what we’ve all been taught over the years—that it truly is better to give than to receive. Whether it’s giving through music, as with Pinetop Perkins, or through food and clothing, as with Mobile Loaves and Fishes founder Alan Graham (a veritable reincarnation of Santa), it seems to be that happiness comes with connection and service to others, and contributing to the happiness of our fellow human beings. It is for this very reason that Shapter has made the national screening tour of Happiness Is one that will benefit local charities along the way. From arts organizations to charities that help the homeless, Shapter is looking to spread the message of true happiness by focusing on the need in individual communities, making Happiness Is a crucial film for our times.

Happiness Is will screen in Fairfield in March 2010 (the December screening was postponed due to an awesome blizzard). For details, call the box office at (641) 472-2787 or purchase tickets at the door, $10 general, $6 children and students.