Roland Emmerich has exhausted his niche and the entire “monuments being destroyed by tidal waves” genre. After 2012 it will be very difficult to see another movie that centers around scenes like a gigantic cyclone ripping through the Saint Louis Arch (actually, I would totally see that). This is not a knock against the movie; in fact, it’s about the highest praise I can think of. For B-movie disaster flicks, 2012 is about as casually entertaining, visually eye-popping, and shamelessly preachy as you can get. It’s exactly what I was hoping for. If, like me, you go in looking forward to breezy aerial shots, collapsing buildings, and ridiculous dog-rescue scenes, you won’t be disappointed

Taking a cue from the Mayan prediction that the world will end in 2012, the film concocts some nonsense about neutrinos and the earth’s core heating up and the crust shifting. After the president (Danny Glover) hears the news, he arranges for the leading nations in the world to start building secret arks.

Then there’s John Cusack and his obligatory human-interest thread to ground the story. He’s a failed sci-fi writer who wrote a space opera about people treating each other well during hard times, Through remarkable coincidence, he figures out what’s going on and manages to load his family into his limo and outrun California as it falls into the sea. 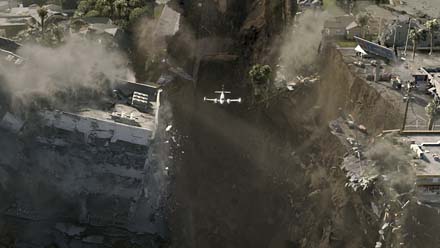 Amidst this, there are Russian oligarchs and Indian scientists and capsizing cruise ships and Yellowstone turning into a giant volcano and . . . well, you get the idea. The plot is ridiculous, but it succeeds because it’s not boring and just believable enough to keep your attention.

All the actors in the film (John Cusack, Woody Harrelson, Thandie Newton, Chiwetel Ejiofor, Danny Glover) are basically slumming in a film like this, but admirably so without smugness or glib. Their job is to give credence to the non-stop CGI. And what CGI it is! The whole state of California crumbles, tsunamis wash up to the peak of Mt. Everest, Yellowstone erupts. It’s all totally implausible and glorious. Although the holidays are known for serious Oscar-baiting movies about repentant Nazi nuns or what have you, the overstuffed effects movies are much better to watch in a food coma.   B+

Happiness Is, the Movie: Andrew Shapter's Film Explores What Makes Americans Happy in the 21st Century

How to Avoid Falls: Improve Your Balance