A LITTLE BEFORE midnight on the last Saturday in July, my cell phone rang.  “Hi Dad. I’m in the emergency room. I had a bike accident and crushed six of my teeth,” my 19-year-old daughter Lena said.

I didn’t say that I thought she was in shock or that the pain would become excruciating once the infection set in, and I didn’t mention she’d be starting college with a $30,000 debt—the cost of six tooth implants. Instead, I opened my laptop.

“Pops, you need to be strong for her,” said my son Givan when I called him after talking to Lena. I Googled dental implants around the world. By 2 a.m. I had emailed inquiries to a half-dozen dentists. The prices ranged from $1,200 per implant in Costa Rica, Mexico, and Puerto Rico to 1,000 Euros in Prague, Budapest, and Madrid. I also wrote to my Facebook friend Irene in Ukraine.

The next day I received an email from Irene saying that a friend of hers had gotten ten implants for herself and six for her husband from a specialist in Khmelnitskiy, the city where Irene lives. One implant didn’t take and it was replaced free of charge. The industry standard for successful implants is 95 percent, and with the free replacement policy, I reasoned, it would be 100 percent.

I requested the dentist’s email address. Doctor Olex Brusov quoted prices that were eminently acceptable. We corresponded in English because my computer doesn’t have an alternative Cyrillic keyboard, and Irene clarified the details.

In the meantime Lena arranged a consultation in the University of Iowa Dental School in Iowa City. The professor we met had a great sense of humor and matching knowledge. His verdict after seeing a panoramic x-ray was four implants and two restorations. The estimated price tag was $16,000 for the implants and more for the restorations, with a warning that no insurance covers implants. The Ukrainian alternative was $3,000 total.

At this point I looked on Cheapflights.com, and knowing that Wednesday flights are the least busy ones, I checked airfare to Kiev, Frankfurt, Prague, Warsaw, Budapest, and Moscow. Time was of the essence. Although Lena was serene as ever, I was aware that any delay was courting disaster in the form of infection.

I found an Air France round trip, Chicago to Warsaw, for $844 per person, tax included, with a seven-hour layover in Paris. I knew the stopover in Paris would help make this route an easy sell for Lena, who wrote a report on Paris in high school and was learning French. With my last available credit, I bought two non-refundable tickets, leaving on September 8 and returning on September 15, and booked a car in Warsaw with Budget. Lena’s sister Ligaya offered to lend her the money for the procedure. The $3,000 from Ligaya arrived electronically in my account only hours before we left.

Lena and I drove to Chicago. The overnight flight to Paris was into the sunrise, the only way to fly to Europe. And Paris itself? I can’t do justice to the five hours between the time we took the train from and back to Charles de Gaulle Airport, a maze of glass, stainless steel wires, and brutalist concrete assembled by a mad genius. 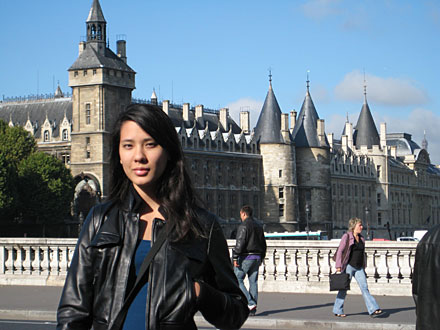 The Frederik Chopin Airport in green Warsaw was more sober—and boring. We rented a small Renault with an auxiliary GPS. The drive through Poland was United Europe at its best: new free roads, good food, and predictable accommodations, except that everybody wanted only the local currency, Zlotys. The border crossing to Ukraine took five minutes, but we should have been forewarned when we saw a five-mile line of cars crossing back into Poland. In the Ukraine the road became twisty even without the slalom between potholes.

The apartment Irene had rented for us was a honeymoon suite in a run-down brick building with an ancient elevator.  Lena was happy to crash and finally get some rest. She had a hard day ahead.

Doctor Olex Brusov’s clinic in modern downtown Khmelnitskiy exceeded my expectations, although it was still under construction. It was appointed with the newest technology, including a dental laser. On the wall above the reception counter were 30 framed certificates and diplomas in at least three languages bearing Dr. Brusov’s name. The dentist himself was in his late 40s, a grandfather of two, and the father of two dentist daughters. If I had had any doubts about the success of our trip, they immediately disappeared. I knew I could trust my life to a man who owned his smile.

He made several x-rays, and for the first time I saw the extent of the damage to Lena’s teeth. Seven molars were chipped or split in half. Dr. Brusov said that two of the teeth were crushed in both directions, but the other five could be restored. He would use two American-made Nobel implants, and we could have the necessary crowns fitted anywhere after three months. He pointed to areas where infection had started, saying we came at high time. Then he said his assistant Oksana Petrovna would take care of the restorations and Irene and I could go to town, because we would be bored for the next eight hours.

When we came back, Lena said she was comfortable, felt no pain, and had slept through part of the procedure.

Sunday was Dr. Brusov’s turn. After two shots, he removed the fragments and began to drill holes straight into my daughter’s skull. I had to leave. Four hours later, Lena was smiling without a shade of worry.

On Monday Oksana Petrovna completed and polished the restorations, and in the afternoon we had time to visit the city park while Lena went gift shopping.  Tuesday was our last morning in Khmelnitskiy, and we left after Irene made lunch.

At nightfall we were at the border, but it took us seven hours to cross. By the time I returned the car, our plane was halfway to Paris. Thirty hours and $500 later we arrived in Chicago. Even with the extra ticket for me and the airfare for the missed flight, we had saved over $11,000. I drove to Iowa thinking that I might want to organize another trip for my Fairfield friends who need their own dental work.

See the Index for more articles on health, beauty, and fitness.