At the beginning of Terra Nova (Monday, 7 p.m. Fox), Earth is undergoing environmental collapse. So a couple—doctor Shelley Conn and cop Jason O’Mara—ake their three kids on a risky trip into the past with a group of pilgrims. They wind up 85 million years ago, where an enigmatic leader named Taylor (Stephen Lang) sets up a colony amid the lush primordial forest. It’s a would-be Eden, but we immediately sense trouble in paradise, both dinosaur- and human-oriented.

Terra Nova has its share of cheesy plot devices: the leader with a dark secret, the hero who won’t follow the rules, etc. On the other hand, I give it credit for being different from the usual network cop and doctor shows. Terra Nova is at once prehistoric and futuristic as it explores the pitfalls of creating a utopia. Plus, I dare you not to flinch when the dinosaurs—aptly called “slashers”—lunge at the camera.

In the midst of chaos, Taylor concedes, “You can’t build a civilization in a day.”

Many series try to create a juicy soap opera set among the rich and wicked, but Revenge is the rare success. Much of the credit goes to Emily Van Camp, who stars as a young woman seeking payback on those who heartlessly framed her father. Our anti-heroine adopts the persona of Emily Thorne, a fresh-faced newcomer to the Hamptons’ high-society set. Emily targets queen bee Victoria (Madeleine Stowe), the one chiefly responsible for her father’s downfall.

Van Camp makes your skin crawl whenever her expression turns stony. You have no doubt that this seemingly innocent lass can cause grievous harm. The series’ epigram quotes Confucius: “Before you embark on a journey of revenge, dig two graves.”

I suspect Emily will dig a few more than that before she’s through.

You expect things to pick up when the ghost appears, but A Gifted Man remains low-key bordering on dreary. The most disappointing moment comes when the dead ex-wife gives Michael her old computer password and asks him to download some files.

That may well be the least spine-tingling request made by a ghost in recorded history. 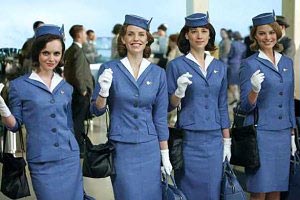 This new drama turns back the clock to the "coffee, tea or me" era—the early days of commercial jetliners in the early ’60s, when the “stewardesses” were all gorgeous young unmarried women in sexy uniforms and white gloves. Pan Am is an airborne soap opera about making up and breaking up, but the producers throw in Cold War spy stuff in a misguided effort to give it some heft. They also make a few token attempts to show brains under those jaunty Pan Am caps. “Does the Marxist dialectic account for a dual thesis?” asks the boyfriend of stewardess Christina Ricci. Her unlikely reply: “That’s Hegel, not Marx!”

For all its pretensions, Pan Am is chiefly concerned with showing the women wriggle in and out of their tight clothes after flight duty. As Marx said, beautiful stewardesses are the opiate of the masses.

Or was that Hegel?

Every new TV season needs one series so crazy-bad it’s good. Hart of Dixie is the 2011 edition—an earnest attempt to touch our hearts that instead leaves us paralyzed with laughter.

Speaking of “heart,” Zoe Hart (Rachel Bilson) is a heart surgeon who graduates at the top of her medical school class despite seeming like a marble-mouthed airhead supermodel from The O.C. A kindly old general-practice doctor from small-town Alabama just happens to be in Manhattan to hear her supposedly brilliant commencement speech, and he’s so moved that he insists she come work with him. Hyper-ambitious urbanite Zoe wouldn’t hear of such a thing—that is, until she inexplicably changes her mind within a couple minutes. She arrives in the boonies wearing a micro-miniskirt and bitching loudly about Alabama culture.

Would you believe that her scorn is softened by the colorful-yet-decent citizens; that she trades insults with hunky guys who might just become love interests; and that she proves herself to the skeptical townsfolk with some fancy-schmancy emergency surgery, still dressed in the micro-miniskirt? I thought you would.

The pilot ends as Dr. Hart tearfully converses with a gravestone while heart-rending country music plays on the soundtrack. “Maybe, even though you’re gone, there’s still a few things you can teach me!” she pleads.

Even the gravestone seems to have trouble keeping a straight face.

Suburgatory Sets Out to Destroy the Suburbs