Suburgatory (Wednesday, 7:30 p.m., ABC) runs roughshod through the suburbs, laying waste to the malls and manicured lawns. This new satire stars Jane Levy as Tessa, a Greenwich Village wild child whose dad moves her to suburban hell for a supposedly more wholesome life. Levy looks like a young Julia Roberts and also has Roberts’ way with a deadpan wisecrack. Her character is our tour guide through this strange new world of nose jobs and lacquered hair, narrating with city-girl sarcasm.

Tessa can’t believe her dad (Jeremy Sisto) expects her to be happy among the plastic people. And she just sneers when he unveils their new suburban accoutrements with an enthusiastic “ta-da!”

“ ‘Ta-da’ is what you say when something good happens.”

Suburgatory gets every potpourri-scented detail right (believe me, I speak from experience), but its scorn never turns toxic. The filmmakers avoid condescension by giving Tessa a heart under her smug superiority. As a result, Suburgatory is the rare sitcom that crushes its subject while displaying a certain amount of affection for it.

You know you’re in trouble when you start yearning for the high quality of the 1970s-80s Charlie’s Angels. No one ever mistook that tale of babelicious detectives for a masterpiece, but give it this much: The damn thing was memorable, thanks to actresses (Farrah Fawcett, Kate Jackson, Jaclyn Smith), who all deserved their long showbiz careers.

Rachael Taylor, Annie Ilonzeh, and Minka Kelly, the stars of the new Charlie’s Angels, will not be remembered 30 years from now. They’re just generic hardbodies solving generic crimes while taking themselves way too seriously. The series offers nonstop karate kicks and explosions and precisely zero fun. Meanwhile, the actresses deliver the lame dialogue with would-be fierceness: “We’re Angels, not saints!”

You’re not stars, either.

Andrew (David Hornsby) is a fussy journalist who sees himself as the Last of the Gentlemen. He dresses in blazers, opens doors for old ladies, and uses the word “whom.” Andrew befriends Bert (Kevin Dillon), an obnoxious slob who represents his polar opposite. “You know everything about bein’ a gentleman, but nothin’ about bein’ a man!” Bert bellows. Cue laugh track.

Given that The Odd Couple already covered this premise, and much better, I don’t know who will tune in to How to Be a Gentleman. Or whom. 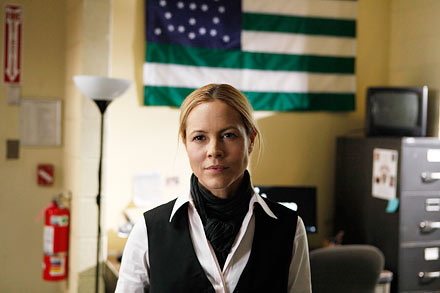 Maria Bello will probably grow tired of being compared to Helen Mirren in this American remake of the beloved British crime series. But you can’t help it: Mirren gave an unforgettable performance as homicide detective Jane Tennison, while Bello is eminently forgettable as the new Jane, who deals with cartoonish sexism from colleagues on the Manhattan force. Bellow lacks Mirren’s gravitas, flashing a 100-watt smile that seems more appropriate for a sitcom than a gritty drama. Her jaunty fedora doesn’t help, nor does her constant gum-chewing.

I hate to say it, but I think Helen Mirren could even chew gum better than that.

Documentarian Ken Burns has found another big subject that allows him to zoom in and out of black-and-white photographs from his favorite era, the 19th and early 20th centuries. Prohibition displays all the Burns affections we’ve come to know from The Civil War, Jazz, and Baseball: the melancholy music played on old-timey instruments, the earnest narrator, and the overly detailed approach that finally wears you out.

But I guess you can’t really blame Ken Burns for making a Ken Burns documentary. On the plus side, Prohibition is an ambitious work that attempts nothing less than a history of American alcohol consumption. Burns starts in the early 1800s, when easily available whiskey turned a nation of drinkers into a nation of problem drinkers. On his way to 1920s Prohibition, he explains dissolute saloon culture and the sometimes over-the-top attempts to curb it. We hear of such colorful reformers as Carrie Nation, whose unsubtle approach to temperance involved busting up saloons with a hatchet. Her motto: “smash, smash, smash.”

I wish Prohibition had a fraction of Nation’s energy.