﻿Martin Scorcese’s George Harrison: Living in the Material World uses rare and never-seen-before footage to trace the arc of Harrison’s life, from his birth in 1943 to his passing in 2001.

When you tick off George Harrison’s achievements, he sounds like a titanic figure in rock history: the Beatles’ brilliant lead guitarist, the writer of classic songs like “Something” and “Here Comes the Sun,” the creator of the big rock charity concert, the man who popularized Eastern music in the West and brought spirituality to pop. And yet Harrison was overshadowed by John Lennon and Paul McCartney during the Beatles’ 1960s heyday, just as he has been since. That makes him a ripe subject for a two-part documentary treatment by Martin Scorsese, who is able to tell us all sorts of things we didn’t know about one of the 20th century’s most famous people.

We learn, among other things, that Harrison experienced extremes of anger and serenity; that he overindulged in drugs even as he sought enlightenment through Eastern mysticism; and that he had a weakness for women, even during his long, happy second marriage. For the first time, we see Beatlemania from a George-eye view, with film footage and photographs that will be unfamiliar to the most devoted Beatles fans. 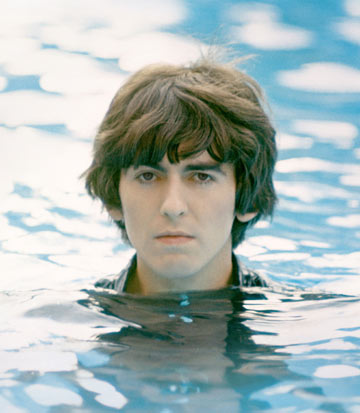 ﻿John Lennon said of George, "George himself is no mystery. But the mystery inside George is immense. Itʼs watching him uncover it all little by little thatʼs so damn interesting."

What those fans will really enjoy, however, is discovering that Harrison embodied Beatle virtues to the end of his life, through all his changes in beard length and hairstyle. He thought through his confusing experiences and tried to makes sense of them; he strove to evolve as an artist and a person; and he maintained a childlike sense of the absurd in even the most solemn situations. Ringo Starr recalls that George’s last words to him, uttered just before dying of cancer, were a typically dry joke.

Ringo both laughs and cries as he recalls the scene. I predict you will, too.

Suburgatory Sets Out to Destroy the Suburbs