Horse whisperer Buck Brannaman has a powerful rapport with horses. He calms the animal, gives him respect, shows him who’s in charge, and gently gets the horse to follow his lead. Brannaman explains that riding a horse is just an extension of the rider’s body. And that problems arise from the owner’s failure to read the horse’s body language and understand his behavior. We see Buck riding his horse sideways, backwards, and in circles, like a dance, directing his horse with invisible cues and mere intention. And then we get it: this man is onto something.

Attending one of Brannaman’s horse clinics inspired Cindy Meehl to film Buck, her first documentary, which became the official selection of the 2011 Sundance Film Festival. Meehl follows Buck’s life on the road as he travels the country teaching his clinics. The film includes interviews with friends, horse owners, and Robert Redford, whose incredible 1998 feature film The Horse Whisperer relied on Buck’s technical support. The documentary also reveals Buck’s abusive childhood, which he rose above. Meehl knew Buck’s story would inspire people, whether they owned a horse or not. She was right, but this begs the question, why should we care about a man who tames horses?

Here’s the short answer. What Buck teaches us is something bigger than horses, something universal that underlies communication. It involves understanding, and giving and receiving respect. It means being in control of your emotions, being calm and attentive, and having the clarity to read signals—from a horse, from a dog, or from a person—and responding appropriately. It’s no surprise that Cesar Milan, the Dog Whisperer of National Geographic TV, says he solves dog problems by educating the owners to understand their canines. The principle is consistent. Trust, respect, and understanding are more powerful than intimidation. This is why Buck says that leading a horse is 90 percent mental and 10 percent physical. It’s the Zen of communication, the shortest distance between two living beings. 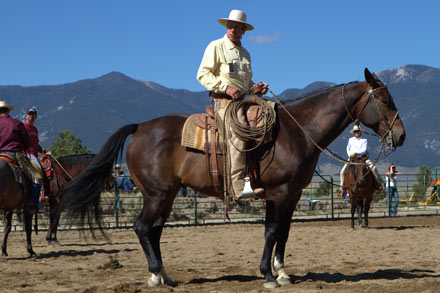 "Your horse is a mirror to your soul, and sometimes you may not like what you see. Sometimes, you will." —Buck Brannaman

In the early 1800s, the term “horse whisperer” was given to Irishman Daniel Sullivan, whose gentle rehabilitation techniques included standing face-to-face with the horse as though speaking to him. His methods eventually found their way to the U.S., and were mastered by Tom Dorrance and Ray Hunt, Buck Brannaman’s mentors.

Says Buck, “My mentor, Tom Dorrance, the godfather of this style of horsemanship, would say, ‘Buck, don’t treat him like he is. Treat him like you’d like him to be.’ ” And there you have it, the reason we care about the man who gently tames horses: because there’s so much we can learn.  B+

Homage to "Insanely Great" Steve Jobs: A Man with a Vision