Hell on Wheels is the rare contemporary Western that actually registers as credible (Sunday, Nov. 6, 9 p.m., AMC). The subject is the construction of the transcontinental railroad after the Civil War. That may sound prosaic, but the production has the epic quality of genre classics like The Searchers and High Noon, digging into the blood-red guts of our frontier history. The tale is steeped in American sin, from slavery to government corruption to Indian genocide. As with most tales of sin, Hell on Wheels holds out the possibility of salvation—though it’s unlikely to come from the church built next to a railroad camp’s makeshift whorehouse.

The pilot introduces us to a rapacious businessman (Colm Meaney) who breaks every moral rule to get his railroad built; the emancipated African Americans who are still treated like slaves during construction; and Native Americans who savagely attack the intruders on their land. The most mysterious character is a Civil War veteran (Anson Mount) who’s haunted by an event involving his dead wife. It’s not immediately clear what happened, but whenever he hears the phrase “Meridian, Mississippi,” he does something unspeakable to the person who said it.

The filmmakers have a great feel for the period. You will see images and hear lines of dialogue you won’t soon forget. I urge you to make time for Hell on Wheels and tell all your friends about it. Just be careful not to say the words “Meridian, Mi…”—um, never mind.

A four-part miniseries called “The Fabric of the Cosmos” assaults our common assumptions about the universe. With help from imaginative graphics, scientists explain their current mind-bending theories about space and time. 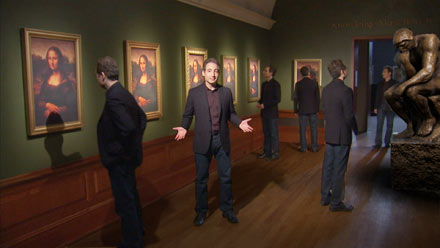 Physicist Brian Green hosts "The Fabric of the Cosmos," revealing a world far stranger than anyone expected. Photo courtesy WGBH.

For example, all moments from the past, present, and future may exist at the same time. The three-dimensional world may be just an illusion. And there may be parallel universes that contain variations of all of us—that is, ourselves with different families and careers.

In some parallel universe, I hope, this blurb ends with a really funny joke.

The USA series resumes its fifth season with new episodes, offering the network’s patented blend of low-key crime-fighting and humor. Michael (Jeffrey Donovan) is a blacklisted spy in Miami trying to figure out how he got framed, with help from a glamorous girlfriend (Gabrielle Anwar) and a retired Navy SEAL (Bruce Campbell). In genial narration, Michael offers tips on how to be a spy: “When you need to buy time for an operation, the key is remaining relaxed, no matter how high the stakes are.” 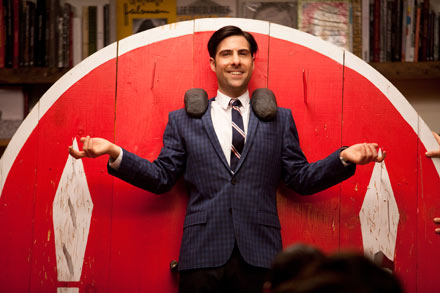 Jason Schwartzman plays a struggling writer who pretends to be a private detective in Bored to Death. (photo: Jessica Miglio)

It’s season three for the absurdist comedy about writer Jonathan (Jason Schwartzman), who moonlights as an unlikely private detective in New York City with help from restaurateur George (Ted Danson) and cartoonist Ray (Zach Galifianakis). I love the three main actors, and this week’s episode also features impressive guest stars Mary Steenburgen, Sarah Silverman, Olympia Dukakis, and Oliver Platt. Silverman plays a “friendship therapist” who uses unorthodox methods to repair the ties between Jonathan and George. “Don’t apologize to the people you love!” she screams in an un-therapist-like manner.

The series passes a half-hour pleasantly enough, but Jonathan Ames’ scripts aren’t exactly inspired. The new episode climaxes with a dumb cart chase in the grocery store as the characters throw chickens at one another. 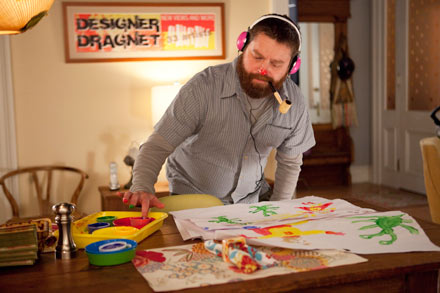 Zach Galifianakis (in Bored to Death): the guy’s a hoot!

I’m sorry to say this, given my respect for the talent involved, but Bored to Death should have been a lot better than this. Oops . . . I forgot I’m not supposed to apologize to the people I love.

After 2009’s powerful WWII in HD, History brings another war into terrifyingly sharp focus. Over the course of six hours, Vietnam in HD offers never-before-seen footage transferred to high definition, much of it shot by soldiers in action. Michael C. Hall narrates the sad history of the United States’ involvement throughout the 1960s and ‘70s, and over a dozen actors (inclduing Jennifer Love Hewitt and Dylan McDermott) read first-person accounts by those caught up in the conflict.

Played against images of bursting bombs and wounded soldiers, President Lyndon Johnson’s lofty speeches ring false: “We fight because we must fight, if we are to live in a world where every country can shape its own destiny.” Much more resonant are the words of soldier Barry Romo, who had his doubts about America’s need to fight this war when he joined the Army in 1964: “To be honest, it was hard to imagine how something on the other side of the world could really affect us in San Bernadino.”