More than a decade after the disappointing Wild Man Blues, American Masters gives Woody Allen the documentary he deserves (Sunday, November 20, 8 p.m., PBS). Allen has long been a remote figure, loath to grant interviews or make personal appearances. The two-part “Woody Allen: A Documentary” allows us to get as close to the writer/actor/director/standup comedian/clarinetist as we ever have and probably ever will. It examines Allen’s enormous body of work, his odd filmmaking methods, his gloomy philosophy and his singular personality. Interviewees include friends, colleagues, critics, movie stars, ex-wives and—miracle of miracles—the man himself.

Allen’s cooperation guaranteed that this would be an important work. It also guaranteed that it would be funny, thoughtful and eccentric – the rare 3 ½-hour documentary you wish could go on longer. Allen revisits his childhood home in Brooklyn, where he was first startled by the idea of mortality at age 5. “Once I realized it, I thought, ‘Deal me out,’” he says. “I never was the same after that.”

Neither was show business. Allen turned his existential dread into art, combining influences from Groucho Marx, Bob Hope and Ingmar Bergman into an original approach. He became a nationally recognized gag writer in his teens, conquered standup in his 20s, created comic movie masterpieces in his 30s, and took his place among the great American directors in his 40s. Despite succeeding at anything he ever tried, however, Allen is obsessed with failure, just like his alter ego in Annie Hall who believes “life is divided between the horrible and the miserable.” He insists that “the only thing standing between greatness and me is me.”

It falls to the commentators to defend Allen’s career from his own damning judgment. One of them even attempts to defend existence itself from Allen’s relentless barbs, using his own comedies against him. “If life really is absurd and horrible and brutal, I would want to ask him, ‘Why are we laughing?’ ” 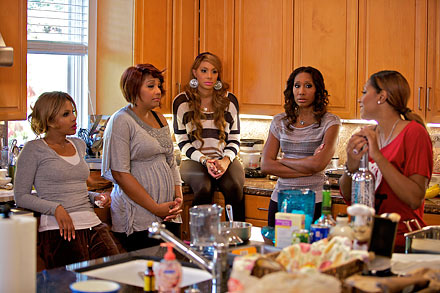 The Braxton sisters look at Trina suspiciously as she cracks open a bottle of champagne. (Photo: Chris Ragazzo, WE TV)

One difference between the Kardashians and the Braxtons is another T word— talent. The Braxton sisters count one singing star among them—Grammy winner Toni—and the others have artistic ability as well. The on-again, off-again plans for a Braxton family album are a cause of friction in season two, along with the growing arrogance of baby sister Tamar. In a family of firecrackers, Tamar is the M-80, and the attention she got in season one has only made her more explosive. She aggressively pursues a solo singing career and gets up in everybody else’s business. Tamar exasperates Toni—who’s currently single—by insisting that she hook up with someone immediately. “I’m gonna make sure Toni gets her little somethin’-somethin’ if it’s the last thing I do,” she says. 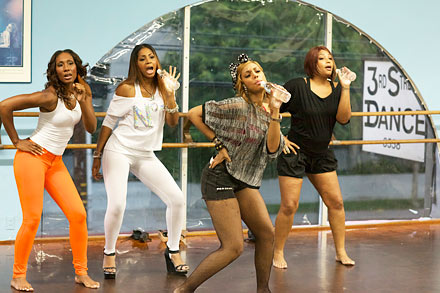 The Braxton sisters, minus Toni, practice for their first gig in 15 years. (Photo: Chris Ragazzo, WE TV)

Check out Braxton Family Values if you want to see a reality series with a little somethin’-somethin’.

I had my doubts when this series premiered last year, seeming like the formless tale of hustlers Ben (Bryan Greenberg) and Cam (Victor Rasuk) as they try to get a T-shirt fashion line off the ground in New York City. Turns out it wasn’t formless after all, just low-key and naturalistic, with no interest in big plot hooks. Instead, How to Make It in America focuses on small but compelling moments, the kind that really happen in life. It takes courage to pull off this approach, but the series has mastered it in season two, thanks to canny scene-making and great acting by the large cast of hoods, girlfriends, and business associates.

In this week’s season finale, Ben and Cam struggle with the business and their own friendship. As they have definitely not yet Made It in America, I look forward to their further adventures in season three.

Here’s another entry in a classic reality genre: vile people screaming at each other while the cameras roll. Married couples and their in-laws volunteer to enact their hatred for one another on national TV while a bleached-blond therapist offers sage advice.

In the creepiest episode thus far, the therapist instructed the wife to put duct tape over her parents’ mouths—a technique not yet approved by the American Psychological Association, I’m guessing. Would you be surprised to learn that the duct-tape cure led to a violent argument among the family members, requiring a crew member to stop them from killing each other?

I’m going to say something really foul about Monster In-Laws unless someone puts duct tape over my mouth.

The Fluoride Controversy | The Facts Call Fluoridation Into Question