Kim Kardashian: girl knows how to throw a wedding.

I got caught up in the excitement of Kim Kardashian’s whirlwind romance with basketball player Kris Humphries, which played out on Keeping Up With the Kardashians. True, Kim and Kris had known each other only for a few months, but come on – his name started with a K, the same as all the Kardashian sisters. With that kind of foundation, surely this love would be 4-ever.  I shared tears with the Kardashian family during the two-part wedding specials last month, and after much prayer and meditation, I concluded that Kim had in fact picked out the right wedding dress from the hundreds she tried on.

So imagine my surprise when, only three weeks after the wedding special, Kim filed for divorce, citing irreconcilable differences. Can any differences qualify as “irreconcilable” after such a short time? One begins to think that Kim didn’t even try. Worse, one begins to think she manufactured the whole romance so she’d have a plot point for the reality series. I refuse to watch any more Kardashian productions, which have proven that they will use any trickery to get us involved in the sisters’ lives.

To be honest, though, I’m going to begin my strike after Kourtney & Kim Take New York (Sunday, 9 p.m., E!). Word is that the new season will deal with the breakup, and I can’t miss that, now, can I?

Mitch Albom’s Have a Little Faith

It’s another TV movie based on an inspirational Mitch Albom book, in which the self-dramatizing sportswriter fancies himself asking big questions about God and faith. An oh-so-wise rabbi who speaks in aphorisms (Martin Landau) asks Albom if he would prepare a eulogy for him in anticipation of his death. This sends Albom (Bradley Whitford) into a paroxysm of aphorisms himself, not to mention parables. He narrates the parallel story of an African American man (Laurence Fishburne) who gains the world but loses his soul. The movie has so little feel for black culture that this subplot seems like a minstrel show, with exaggerated ghetto dialect, clothes and behavior. The idea of a white guy using black stereotypes to teach us all a lesson is —well, the most generous way to put it would be “old-fashioned.”

Whitford delivers his dialogue with a dazed expression, as if he still can’t believe his agent made him take this job. “There is a fine tradition of men running away from God,” he says in a typically Sunday School moment.

There’s also a fine tradition of men running away from godawful TV movies. 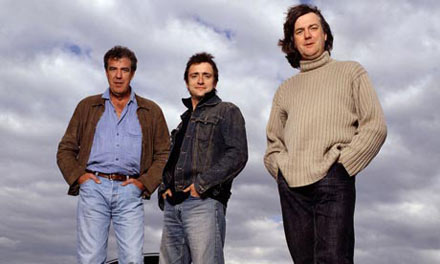 U.S. reality shows about driving fast vehicles tend to feature boneheads like Jesse James, who act stupid and make us feel stupid in the process. Not so with the British driving series Top Gear, which is Masterpiece Theatre compared to our versions. The drivers are witty, and they pull off droll stunts like racing a sleek Porsche against a pathetic Volkswagen Beetle that’s dropped a mile from a helicopter.

A new eight-episode run counts down the fans’ favorite moments. Host Andy Wilman is acutely aware of how silly it all is, at least from the perspective of a cultured British audience. “There will be much catching of fire, much shouting of ‘Power!’” he says with heavy irony, “and I guarantee you will feel your IQ physically falling when you watch some of our finer moments.”

From the American perspective, I can report that I felt my IQ physically rising.

E’s new modeling series tries to distinguish itself from America’s Next Top Model by eschewing the competition element. Instead, Scouted sends scouts out to burger joints and soda fountains around the country to discover potential supermodels in the wild. These ordinary people will be whisked off to a coastal modeling agency to see if they have what it takes to be the next Heidi Klum or her male equivalent. Industry pros will give them makeovers and offer tips on how to look emaciated in just the right way.

I’m not an industry pro, but I can offer the would-be emaciated models one tip off the top of my head: stop hanging out at burger joints and soda fountains. Whoppers and banana splits are not the way to the top in this particular field.

TNT kicks off a series of crime-novel adaptations with Scott Turow’s Innocent, a sequel to Presumed Innocent. Turow is a big name, and the impressive cast includes feature-film-caliber actors like Bill Pullman, Marcia Gay Harden and Alfred Molina. And yet the movie never lifts off, weighed down by an overload of exposition.

Pullman plays Rusty Sabich, a judge accused of murdering his wife 20 years after being cleared in the murder of his mistress. There’s another mistress involved this time, along with a zealous prosecutor who practically narrates every plot point for the entire two hours. Meanwhile, the actors seem to have no idea how to play people who are keeping secrets. They simply twitch extravagantly whenever their characters are supposed to be lying.

But, what the heck, if you’re a Turow fan, you should still check out Innocent. You might just find something to like. (Twitch, twitch.)