Terrence Malick has made 5 movies in 38 years. Like Thomas Pynchon or Leonard Cohen, he has created a legacy around his career, his eccentricity, and his reclusiveness. His first two films, Badlands and Days of Heaven, are 95-minute jewels of painterly cinematography, wry humor, and American vastness. His next two films (1998’s The Thin Red Line and 2006’s The Known World) are more problematic—visually astonishing, but a bit lifeless. Malick has apparently been working on Tree of Life for decades. It is by far his most personal film: the ghost of family tragedy haunts it.

I have now seen Tree of Life twice, and it feels—like 2001, Lawrence of Arabia, The Battle of Algiers, and The Leopard—less like a film than a monument. It is not perfect. Its depiction of the afterlife is a bit half-baked. Sean Penn delivers a grim performance that seems heavily redacted. But none of this matters. Tree of Life is at once cosmically mind-blowing and emotionally wrenching. I’ve never seen a movie that telescopes between the heavens and the heart with more grace and wonder.

The film opens with the death of a 19-year-old. The cause is never discussed, but his age is enough to denote the tragedy (apparently Malick’s brother committed suicide at this age). The profound sadness of this loss, its ineffable mystery hums behind even the most joyous sequences. The film begins with a quote from the book of Job, asking in effect, “Where are you, God?” and the rest of the film is a rapturous, relentless echo of this refrain.

The cinematography, soundtrack, and obsessively perfect set-design create not just an authentic atmosphere but a distinct character. No other film feels like Tree of Life, and if you relax into its assured rhythms, it is endlessly surprising.

What makes Tree of Life ultimately so devastating is its main trio of performances. Remember when we thought Brad Pitt was a lightweight? No more. His patriarchal performance is a towering masterpiece—a proud man racked by failure and spite, whose brittle expressions of love are as painful as his rage. Jessica Chastain is incandescent as his wife, a shimmering paradigm of grace. And all the children are so natural it’s as if they’re unaware they’re being filmed.

When I saw Tree of Life this summer, maybe 20 percent of the audience walked out. It is not an easily digestible film. It contains multitudes and rewards attention. I can’t imagine seeing a better movie in 2011, or the rest of the decade, for that matter. A+ 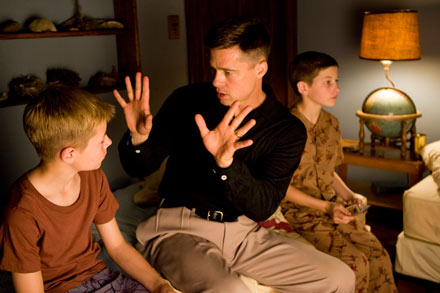 Writer/director Terrence Malick takes us where only a few filmmakers, such as Stanley Kubrick, have gone before. Tree of Life delivers a composite impression about personal life as well as the big scheme of life in general, through a non-linear and not necessarily logical journey that will either pull you along or it won’t.

Tree of Life poses a consideration of two paths of life: nature or grace. Mr. and Mrs. O’Brien are a team of opposing forces, raising their three sons in 1950s Texas. Mom (Jessica Chastain) embodies grace in all of its feminine gentility; Dad (Brad Pitt) exemplifies nature—nourishing but violently explosive, like a volcano. He’s an abusive father. Young Jack (Hunter McCracken), the eldest son, is a powerful young screen presence with a fascinating face. He owns the general narrative of the film and we feel his pain.

The family story has great potential. But the film overwhelms us with its cosmic alter-ego that’s interesting but as strange and distracting as the loud little whispers that narrate the film. There are Bible quotes, symbolic scenes of heaven and the afterlife, and primordial images that are stunning but excessive. Ultimately, Tree of Life is a hybrid of two movies that never merge.

As a grown man, Jack is played by Sean Penn, who spends his few screen minutes wordlessly pondering, apparently seeking answers about his harsh upbringing and about his brother’s mysterious death at age 19, which we are all still wondering about. One online source suggests that Tree of Life is a personal healing for Malick, whose brother committed suicide. The search for peace and understanding is a worthy goal and will always find a willing audience. But Tree of Life is so long and free-form that it lost me from the beginning; I was in need of a map, a compass, and a table of contents. Even Sean Penn suggests that “a clearer and more conventional narrative” would have helped.

Tree of Life won the Palme D’Or at the 2011 Cannes Film Festival and, honestly, I respect Mr. Malick’s bold cinematic experiment. But the script seems like an unformed concept that is still finding its way, with plenty of art for art’s sake. Like a film in its raw stages, that has yet to pass through the editing room to be cut, sequenced, and seriously shortened. But don’t let me stand in your way. Rent the DVD and see what you think. You must at least be curious.   Unrated