A detail from Diane Naylor’s Blue Moon features a pale pink fox. This painting is part of her 2011 Creating Compassion series.

If DreamWorks is looking for a creative director to develop endearing characters for their next animation, Diane Naylor is their woman! Her most recent series of paintings, Creating Compassion, portray lovable and realistically intelligent creatures inhabiting an atmospheric magical realm. These forest dwellers are definitely not Kung Fu Panda cute. They quietly open us up to the understanding that animals can feel like we feel and embody the deepest qualities of life in balance with nature.

Last month, when the weather was unusually kind, Diane roared up our drive in her “yes, I’ve arrived” black Audi TT. She emerged drop-dead gorgeous and fortified with a cuppa coffee to discuss her latest work showing at ICON Gallery in Fairfield (through January 21).

An Iowa native, Diane is the youngest daughter of Jerry and Betty Naylor, who grew up in the rolling hills of Jones County, where American Gothic artist Grant Wood had his studio and drew his own inspiration. But when I asked Diane  about her childhood, she laughed, suggesting that I write she “grew up in rural Iowa raised by a pack of highly accessorized poodles.” This is classic Diane, guaranteed to be hilariously inappropriate in any given setting. Later, I thought to myself, this actually is a believable explanation for her obsession with her constant canine companions, Jyoti, a purebred poodle, and Buffa, the stylish and media-savvy Shih-poo, who recently posted her own Facebook page.

Before our meet-up, I studied Diane’s engaging animal portraits in two editions of the book Creating Compassion: Paintings & Quotes Inspiring Compassion, which she produced to accompany the paintings. My childhood was spent in North Idaho, so I’m familiar with porcupines, rabbits, owls, badgers, foxes, bears, hummingbirds, and hawks, but her revealing vignettes made me feel like I’d never really “seen” them before. Her images triggered emotions I usually reserve for Dorothea Lange or Henri Cartier-Bresson photos. Each of Diane’s animal portraits is a bridge into a sensitive nature story. Her signature chiaroscuro intensifies the magic of these beings against backdrops of deeply shaded forests, storm-threatening skies, starry nights, or the smoky-orange air following a forest fire.

I asked Diane how her inner world affected this work. Always a sensitive, abstract thinker, she discovered she “was not alone in that interior world.” After a move to Fairfield in 1996, her life simplified into days immersed in painting, meditating, and taking long walks in nature. In this environment, deeper qualities of her inner life emerged and anchored in her artwork.

Diane admitted that like many artists from art school (Milwaukee Institute of Art and Design) in the early ’90s, she carried an attitude that minimized the importance of landscape art. But by 2008, during a period of self-discovery, she surprised herself by combining landscape art into her earlier collage technique to create her own unique works.

In the subsequent Labyrinth series (2010), Diane explored the beautiful symmetry of the Fibonacci sequence as seen in the structure of a pine cone, the spirals of shells, or the branching of a plant, each portrayed with the dramatic use of light and dark that appears in all her work.

She also mentioned Tao as a strong influence. Wikipedia defines Tao as the  “influence that keeps the universe balanced and ordered.” The elegance and simplicity found in nature is a prime example of Tao at work. In Creating Compassion, Diane masterfully displays the soft and invisible power of Tao within all things as well as the wei wu wei or “effortless doing” that emerges when life is in alignment with nature. Her subjects have a visible intelligence and subtle emotional range that reveal them as beings harmonized with the world around them.

In commenting on this series, which emerged from her studio late last year, ICON Gallery Director Bill Teeple described the pleasure of watching Diane’s work “evolve from charming and creative to truly moving and memorable,” as she developed her “unique style with sophisticated craftsmanship and truly visionary content. It’s as if once her skills reached a certain level, her muse came forth to feed her remarkable images.” 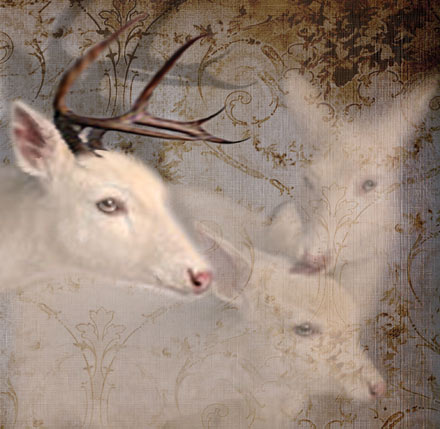 A detail from Diane Naylor’s Loved Ones, also from the Creating Compassion series.

Diane explains her new work as inspired by her “commitment to being vegetarian and love of sentient beings” and a desire to “leave something valuable for the next generation.”

“As artists,” she said, “we have a tremendous responsibility not only for our planet, its atmosphere, and those around us, but also to the children who will live in the world of tomorrow. Why not make a difference by enlivening bliss in others through our creativity?”

There’s no doubt about Diane’s sincere intent to create compassion towards all beings, great and small. “I’ve never understood mean people,” she explained. “This new series makes me feel like I’m in love, it puts me into a state of childlike innocence that never gets tarnished and never gets hurt. The purity I experience in painting these animals allows me to relate to myself in the same way a child likes him- or herself, without the artifice of Juicy Couture or a racy car. My nature is to only see the good in people and to trust them. That’s my Buddha nature. And animals, for me, embody that.”

The Creating Compassion series is showing at ICON Gallery from December 2, 2011, through January 21, 2012.

Mo Ellis is an artist and freelance copywriter/editor.

For more articles on arts and artists, see the Index.