The dramatic docu-series One Born Every Minute (Lifetime Television) takes an in-depth look inside the maternity ward at Riverside Methodist Hospital in Columbus, Ohio.

I admit that I fainted in the hospital when my son was born. There was just too much blood and screaming for a wimpy TV critic to take. So I appreciate the chance to return to the maternity ward as a more detached observer in this remarkable series, which chronicles the miracle of birth at Riverside Methodist Hospital in Columbus, Ohio. Each episode takes several couples and their families from the buildup to the big moment, and the mini-dramas are truly intense. Will the baby be healthy? Will the mother survive the trauma? Will the family members be on speaking terms when it’s all over?

I’d appreciate it if you could tell me what happens at the end of this week’s episode. I did fine for the first 45 minutes, but when the screaming started, I was out like a light. 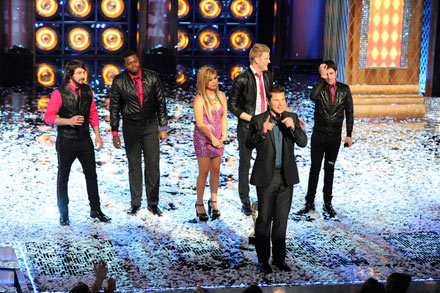 Last year’s installment of the vocal-group competition featured the king of a cappella music, former Persuasions lead vocalist Jerry Lawson. Incredibly, the sixty-something Lawson was tapped as a contestant rather than a judge, and he and his new group provided a weekly clinic in singing from the heart. The panel of judges could do little but bow down before him, marveling at a set of pipes that gives Otis Redding and Sam Cooke a run for their money.

Lawson’s not around this season, so there was nowhere for the series to go but down. Word has it, however, that he’ll return tonight for a holiday-themed guest appearance.

Any current competitor who wants a real singing career had better listen carefully to Lawson’s performance. It’ll be a lesson in Soulfulness 101—a class most of these young singers seem to have missed in school.

It’s hard to believe that Fox, the same network that premiered New Girl this fall, now gives us I Hate My Teenage Daughter (Wednesday, 8:30 p.m.). Where New Girl is a sophisticated take on the sitcom genre, I Hate My Teenage Daughter is painfully old-fashioned, with cornball punchlines that drive the laugh track mad. Annie (Jaime Pressly) and Nikki (Katie Finneran) are friends who get into kooky situations while parenting their beautiful, bratty daughters. Imagine Lucille Ball and Vivian Vance, but without the comic talent.

Even worse than the lack of wit is the lack of civility. The show consists mainly of the women arguing with the kids and their ex-husbands, often at high volume. You feel like you’re trapped in somebody else’s nightmarish family dynamic. “We gave them a hundred dollars to stop yelling at us!” the clueless dads say of their evil spawn.

I’d be willing to pitch in a hundred bucks myself to make the screaming stop.

At mid-century, J.M. Barrie’s Peter Pan was memorably adapted in a Walt Disney cartoon and a Mary Martin musical. Since then, everybody from Steven Spielberg to Michael Jackson has had trouble with the idea of Neverland. The latest misfire is a choppy SyFy miniseries in which Peter (Charlie Rowe) is a juvenile delinquent transported to a galaxy where no one ever grows old. We get Barrie’s pirates, Indians and fairies but none of his enchantment. Indeed, Mary Martin flying on cables felt more magical than this CGI-clogged milieu.

Neverland features a supermodel (Anna Friel) in a sort of Victoria’s Secret version of pirate wear. You’ll shoo the kids away from the TV when she lewdly propositions Hook (Rhys Ifans), who’s dry and grim and no fun at all.

That’s right, folks—it’s a Peter Pan adaptation not meant for children. Gee, who’d have predicted that might pose a problem?

In this week’s episode, the do-gooding gang of thieves, con artists and hackers go undercover in a greeting-card company. Their mission is to find an embezzler, but it’s complicated by the presence of a pompous German filmmaker shooting a documentary there about American business. The gang members have to play along, speaking to the camera in character while also conducting their investigation on the sly. Soon, their actual resentments about working with each other begin to seep into their interviews, in coded form.

In other words, the episode satirizes business, Germany, earnest documentaries and Leverage itself, all while delivering an exciting caper. It also takes a whack at greeting-card culture, as one of the cons offers this idea for a new card line: “Get well soon. Or don’t – it’s not up to you.”

That Leverage pulls all this off is nothing short of miraculous. I feel like sending the producers a thank-you card.