The four friends on Impractical Jokers know how to get laughs—and to laugh at themselves.

Impractical Jokers (Thursday, 9 p.m., truTV) begins with these words: “This program includes scenes of graphic stupidity among four friends who compete to embarrass each other.”

Don’t say they didn’t warn you. The friends put themselves in public situations where they dare each other to say or do preposterous things in front of strangers. For example, they take turns as counter workers at a burger joint, wearing an earpiece so the guy on the spot can get directions from the other three. They order him to speak to the customer at ridiculously high volume, or freeze for a solid minute, or use Old English. What cracks them up the most is the command to rhyme everything. So instead of saying “one order onion rings, seven cheeseburgers, one five-piece cheese sticks,” the guy says, “One order funion smings, seven schneezeburgers, one five-piece bleez blicks.”

God help me, but I laughed out loud. In fact, I laughed for the entire half-hour, no matter how puerile the gags. It probably helps that the friends are jovial rather than Jackass-obnoxious, even rejecting some dares as too offensive. It also helps that they are the butt of the jokes, not the innocent bystanders—who often end up laughing themselves.

So I guess I’ll have to swallow my dignity and recommend Impractical Jokers. I mean, sleckommend Kimlactical Schmokers.

Keeping Up with the Kardashians
Monday, 8 pm (E!)
The Kardashian family stirred up national revulsion after Kim made a fortune off her televised wedding, then immediately filed for divorce. If I were a Kardashian, I would lie low after such flim-flammery, but the family members have instead doubled down on shamelessness. They premiered Kourtney and Kim Take New York mere days after the divorce announcement, and now comes Kendall’s Sweet 16. Yes, folks, we’re going to be asked to celebrate every milestone with every member of this tawdry clan, even the teenage birthday parties.

The Kardashians have been offering up Kendall as an underage sex object ever since she was 12. Now they allow E!’s cameras to swarm her Sweet 16 birthday bash for the delectation of the TV audience. In this kind of environment, it seems unlikely that the kid will grow up to be happy and healthy; the Lindsay Lohan route is more likely.

It’s not often you can save a life by turning off your television, but this might be one of those times. If Kendall’s Sweet 16 flops, and Kendall is forced to leave the TV spotlight, she might have a shot at being a well-adjusted adult. If the program is a hit, she’s doomed.

Any current competitor who wants a real singing career had better listen carefully to Lawson’s performance. It’ll be a lesson in Soulfulness 101—a class most of these young singers seem to have missed in school. 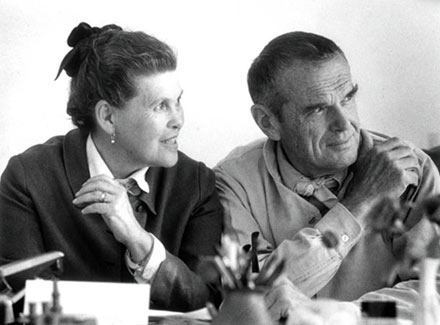 American Masters: Charles & Ray Eames
Monday, Dec. 19, 2011, 9 pm (PBS)
James Franco narrates “Charles & Ray Eames: The Architect and the Painter,” an engaging portrait of the married couple who revolutionized 20th century design. Architect Charles and painter Ray are best known for rethinking the concept of “chair” in the 1940s. They molded plywood into a form that would fit the body, look beautiful, and be easy to mass-produce. The iconic Eames chair typified their motto of making “the best for the most for the least.”

Ah, but there was so much more to Charles and Ray than chairs. Their legendarily eccentric studio in Venice Beach, Cal., churned out films, photography, toys, even visionary corporate publicity campaigns. For the Eameses, design was a playground, and they brought their joyful spirit to a modernist movement that had grown a bit austere. Charles was the charismatic frontman, Ray the esthetic genius, and their partnership was amazingly fruitful in spite of stifling postwar sexual politics and Charles’ infidelity.

Their personal story is interesting, but the designs are what make the documentary a real treat. I never knew plywood could be this thrilling.