Shrek reads Christmas for Village Idiots to find out what the fuss is all about on the 30-minute TV special Shrek the Halls.

This 2007 TV cartoon is on the way to becoming a holiday classic, and rightly so. It doesn’t settle for bargain-basement voice work, but features the brilliant stars of the Shrek movies: Mike Myers as the gloomy ogre, Cameron Diaz as his wife, Eddie Murphy as the overzealous donkey, and Antonio Banderas as the suave Puss in Boots. While much of the TV world will focus on “the perfect Christmas” this week, Shrek the Halls wallows in imperfection. Shrek wants everything to go just right, but he is a swamp monster, after all. That means he hangs dirty laundry instead of stockings and grotesque rodents instead of ornaments. Things get even worse when Donkey, Puss, and the other fairytale characters show up for the festivities. Brace yourself for a night of farts, burps, and bizarre behavior by the extended family.

In other words, it’s a very human Christmas. Shrek the Halls makes the imperfection charming and funny, and there’s a lesson in that for all of us. It gives you a warm feeling inside when Shrek ends the program with his own version of “The Night Before Christmas: “Smelly Christmas to all, and to all a gross night!” 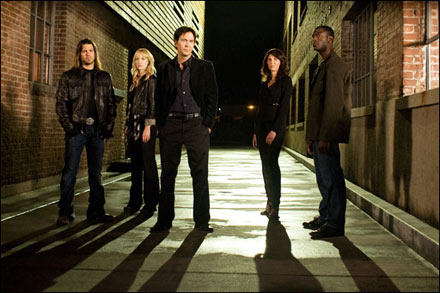 Criminals with compassion come up with a plan to help the underdog on every episode of Leverage.

Leverage
Sundays, 8 p.m., TNT
Leverage is Mission: Impossible with a sense of humor about itself. In every episode, Timothy Hutton’s gang of thieves and hackers pull off a difficult task to help some underdog. They also pull off the difficult task of entertaining us, making it look easy.

The gang members are crooks with hearts of gold. The show’s producers get credit for being good guys, too, since they offer a rare new episode (Sunday, 8 p.m., TNT) amid all the repeats of Christmas week.

Well, yes he is. Nate cons her out of business, making her regret that she ever met him.

He also cons us out of another hour of our time, but we don’t regret it in the slightest. 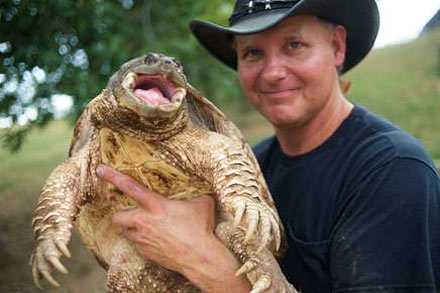 This reality series follows the adventures of gap-toothed Ernie Brown Jr., who makes his living solving wild-animal problems in backwoods Kentucky for about $50 a pop. With his habit of catching dangerous snapping turtles and snakes with his bare hands, kissing the critters on the mouth, and shrieking “Yi yi yi yi yi,” Brown astonishes even his roughhewn neighbors. “Ernie is a whole different critter,” says one. “I’ve never seen anybody like him.”

I’ll second that emotion. Brown is known locally as the Turtle Man, but he might as well be called the Man Turtle since he often seems more beast than human. I wouldn’t be surprised to see a spin-off series where he moves in with some of those animals he kisses so passionately.

Love Games: Bad Girls Need Love Too
Mondays, 9 pm (Oxygen)
Love Games finds the worst women on reality TV—quite a challenge nowadays—and pairs them with equally awful men in a dating competition. Myself, I prefer dates who don’t shriek, fight, and reveal things like: “On the inside I’m like a ticking time bomb!” But apparently some guys go for that type. As you might imagine, they’re guys who are capable of saying some very unromantic things themselves. “You got to put them in their place right off the bat!”

The only thing more off-putting than the contestants’ behavior is their unshakable sense of self-worth. After an hour of backstabbing, one of the guys says, “I can hold my head up high. I was true to myself.”

If “yourself” is that vile, should you really make a virtue of staying “true” to it?

Every year the Kennedy Center celebrates “extraordinary individuals whose artistry has contributed significantly to the cultural life of our nation and the world,” according to chairman David M. Rubenstein. No one could quarrel with cellist Yo-Yo Ma, jazz saxophonist Sonny Rollins and actress Meryl Streep, who are feted in this year’s ceremony. But Neil Diamond? I fail to see how songs like “I Am…I Said” have contributed significantly to the world’s cultural life:  “I am, I said/To no one there/And no one heard at all/Not even the chair.”

The Kennedy Center grandees have never had trouble allowing cheesiness inside America’s palace of culture—witness previous honorees Andrew Lloyd Webber, Perry Como, Jerry Herman and Dolly Parton. And yet they feel it’s beneath them to recognize Jerry Lewis, whose annual absence from the ceremony is nothing short of a national disgrace. Never mind Lewis’ groundbreaking career in vaudeville, TV and movies; never mind his influence on such key figures as Steve Martin, Robin Williams and Jim Carrey. Meanwhile, Neil Diamond, who hasn’t influenced anyone of note, gets the official imprimatur and a handshake with President Obama.

I make a stink about this every year, and I’ve even sent a letter to the Kennedy Center protesting Lewis’ exclusion. But no seems to hear…not even the chair.