Jane Quimby (Erica Dasher) is swept into the fashion industry when she’s mistakenly hired to be an assistant to a high-powered fashion executive in Jane by Design.

The new series Jane by Design (Tuesdays, 8 p.m., ABC Family) is a wish-fulfillment fantasy for ordinary teen girls who think they just might wind up in the glamorous fashion industry one day. Jane (Erica Dasher) introduces herself as “a dateless high school zero” who’s taunted by the popular girls and ignored by her longtime crush. Oddly enough, nobody seems to have noticed that she’s really an Anne Hathaway-level beauty whose perfect figure is draped in stunningly sexy clothes.

Even though those clothes must have cost a fortune, the plot depends on Jane’s being poor and faking her way into a hip couture business to support herself. There, she tames her dragon-lady boss (Andie MacDowell) and catches the eye of a hunky British coworker, who treats her like the belle of the ball rather than a dateless high school zero. Take that, longtime crush!

As silly as it is, Jane by Design tamed me, too. Jane’s insecurity is fetching, and the peek inside her office inspiring. After all, I just might end up in the glamorous fashion industry myself one day.

Oprha’s Next Chapter
Sundays, 8 pm (OWN) 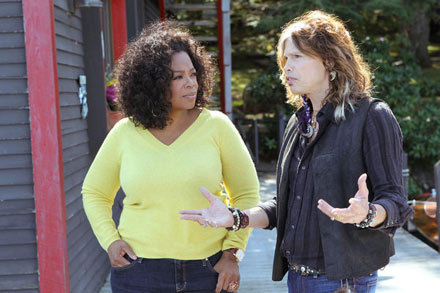 Steven Tyler guest stars on the first installment of Oprah’s next chapter. ©OWN

Oprah Winfrey’s cable channel, OWN, has struggled since it launched a year ago. It’s had no breakout hits, and even the shows featuring famous names (Rosie O’Donnell, Sarah Ferguson, Ryan and Tatum O’Neal) have failed to draw decent audiences.

So now, it’s Oprah to the rescue. Not long after ending her syndicated talk show, she returns with an OWN show called Oprah’s Next Chapter, which gets her out of the studio and into the world. Winfrey will fire-walk with Tony Robbins, tour Haiti with Sean Penn and, in this week’s debut, chat with Steven Tyler on his New Hampshire estate.

Since Oprah is OWN’s only real asset, expect to see a lot more of her. Beginning at 8 p.m. on Dec. 31, for example, she reruns the three farewell episodes of her previous show so we can relive the bittersweet emotions we experienced only a few months ago.

OWN has not yet scheduled Oprah Goes to the Dentist for a Routine Checkup, but it might come to that.

A team of four believers scours the country for evidence of a large hairy beast. Oka-a-a-ay.

A more accurate title would be Not Finding Bigfoot. In the new season, this series sends its grandly named Bigfoot Field Research Organization around the country in search of the large, hairy, human-like animal that doesn’t exist.

Don’t tell them that, though. The four members are eternally convinced that they’ve found real evidence of Bigfoot as they examine photos and interview witnesses. In the season premiere, the BFRO heads to the Catskills to view video footage of a supposed baby Bigfoot. “I think we’re looking at a juvenile sasquatch, which is quite amazing because seeing a baby is incredibly rare!” says one gullible team member.

The BFRO decides to conduct an evening investigation using a baboon borrowed from a local zoo. And even the baboon seems to have trouble keeping a straight face.

HBO shows a rare lapse in taste with this so-called comedy, a showcase for creator-writer-star Chris Lilley. According to the press materials, Lilley is adored in his native Australia, though I suspect the description from a local newspaper review—“jaw-dropping”—might well have been taken out of context. The series claims to explore the 21st century male, with Lilley himself playing asinine adolescents, a black rapper, a cold Japanese woman, a butch prison guard, and other characters.

These people are supposed to be entertainingly pathetic, but Lilley forgot the entertaining part. The adolescent subplot, for example, consists of a foul-mouthed idiot baiting his deaf brother. The prison guard subplot focuses on her allegedly humorous racism. Laughing yet?

This new sitcom is a response to the country’s high unemployment rate. Things get so bad for laid-off Lee (Ben Koldyke) and Angel (Amaury Nolasco) that they resort to dressing up like women to work on an all-female sales staff.

I’m all for gender-bending, but Work It dresses guys in bras and high heels only to affirm rigid sex stereotypes. The series’ men are clueless macho horndogs, the women either ditzes, bitches, saints, or sex objects. The writers’ only idea of a joke is to keep emphasizing the fact that dudes know nothing about women. Sample punchline, delivered by one of those dudes to overwhelming laugh-track approval: “Thanks for the tampon!”

If the unemployment rate drops, Work It’s premise will no longer make sense, and it will have to be canceled. President Obama, the ball is in your court.