If I had a dime for every pilot that failed at being simultaneously exciting, funny, sexy, and poignant, I’d be able to finance my own series. (Title: Teenage Mutant Ninja TV Critic.) But The Finder (Thursdays, 8 p.m., Fox) actually gets the job done, thanks to a rare combination of great acting, writing and filmmaking. Walter (Geoff Stults) is a classic American hero-outsider, a scruffy, comic-book handsome, slightly cracked ex-major holed up in a Florida backwater to solve mysteries his own way. “The military approaches everything in a rigid manner—shock and awe,” he says. “I do things differently, which is why I’m no longer in the military.”

Walter’s circle includes an eccentric partner (Michael Clarke Duncan), a sassy U.S marshal (Mercedes Masohn) who sometimes shares his bed, and a wild child (Maddie Hasson) on parole. Stults looks stunning in T-shirts and shorts, but he’s more than just a (very) pretty face. He has incredible ease on camera, bordering on insouciance. Like the best comic action stars, he can send up the chases and fights while also committing to them fully.

Walter may scorn shock and awe, but that’s pretty much what I experienced while watching The Finder.

The Golden Globes are a ridiculous spectacle, from the notoriously corrupt nominations to the alcohol-fueled acceptance speeches. I’d normally make fun of the ceremony in this space, but I think I’ll take a break this year. Returning host Ricky Gervais is guaranteed to mock his own event much more viciously than I ever could.

Iowa Source, feel free to dock my pay for this blurb. 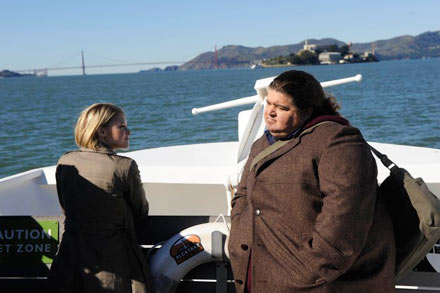 When Alcatraz closed in 1963, over 300 prisoners mysteriously disappeared. In the present day, they start showing up again to commit crimes, not having aged a day in almost 50 years. It falls to a beautiful detective (Sarah Jones), an overweight doctor (Jorge Garcia), and a dude who’s built a secret high-tech facility underneath Alcatraz (Sam Neill) to unravel a conspiracy that defies logic.

Alcatraz defies logic as well. J.J. Abrams’ new series is pure hokum, becoming unintentionally funny whenever Neill goes into ominous-glare mode. But, dammit, it’s entertaining hokum, and I’d be lying if I said I had no interest in learning the truth of the vanished prisoners. 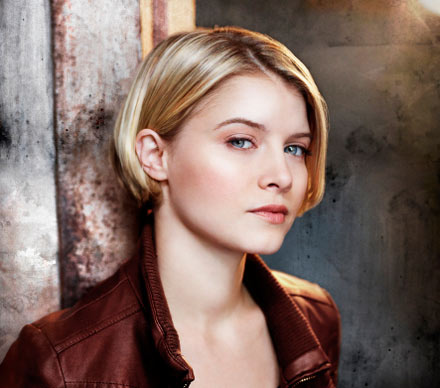 “I’m in,” the beautiful detective tells Neill, committing herself to the preposterous investigation.

I’m in too, against my better judgment. 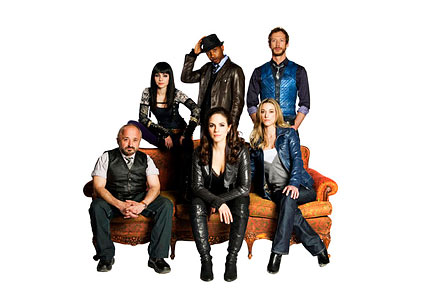 Bo (Anna Silk) is a smart, witty, capable woman with only one problem. As she endearingly puts it: “I sort of drain people.” In the pilot of Lost Girl, Bo learns that she’s a succubus, which explains her vexing habit of leaving dead, discolored bodies in her wake. That makes her sound like a classic (and classically sexist) TV villain, but she’s more complicated than that. Bo wants to cultivate her human side, even when a secret succubus society offers her inducements to partake of their wicked ways.

Silk is fabulous in this role, whether tossing off a zinger, flattening a foe, or displaying supernatural sexiness. She gets help from a script that manages to be serious without taking itself too seriously. For example, after Bo is kidnapped by the succubus clan, they explain themselves to her—the obligatory exposition scene that puts you to sleep in most fantasy series. But in the middle of it, Bo shares her first kiss with one of her own kind, causing blue energy to pass between them in spectacular fashion. “That was like the Fourth of July in my mouth!” she exclaims.

I felt something similar while watching Lost Girl. I can’t wait to have the Fourth of July sensation again next week.

Watching a documentary about Gen. George Armstrong Custer and his Last Stand at the Little Big Horn, you’re amazed that this man was long considered an American hero. Even in the mid 20th century, he got the godlike treatment in an Errol Flynn movie.

To modern eyes, Custer is the embodiment of evil, right down to the creepy mustache. He was vain, ruthless, and underhanded. He allowed fellow soldiers to be massacred in pursuit of his own glory. He decimated Indian communities, including defenseless noncombatants. He even desecrated sacred Indian burial grounds just for kicks.

No, Custer could never be portrayed as a movie hero in the 21st century. He wouldn’t even make a believable movie villain, since he was so over the top. Producers would have to soften him a bit so he wouldn’t seem like a one-dimensional monster.

The creepy mustache, of course, would be the first thing to go.