After wildlife expert Emmet Cole (Bruce Greenwood) disappears in the Amazon, his family set out to find him in The River. (ABC/Bob D’Amicol)

The River (Tuesday, 8 p.m., ABC) is a new series that crosses Heart of Darkness with The Blair Witch Project, to good effect. Emmet Cole (Bruce Greenwood) was beloved for his TV nature series, in which he explored the world with his perfect family: son Lincoln (Joe Anderson) and wife Tess (Leslie Hope). As The River begins, Emmet is presumed dead in the Amazon, and Tess drags a reluctant Lincoln and a camera crew out in search of him. As they travel up river, they discover that Emmet was involved in some scary supernatural stuff, courtesy of the native tribes. And we learn that the family wasn’t as perfect as it seemed on TV.

As in Blair Witch, the footage we see is purportedly captured by the camera crew. This conceit strains credulity at times, but it also allows for some spooky sequences of ghostly phenomena shot from a limited P.O.V. Lincoln, for one, starts to have grave reservations about following in his father’s footsteps, pleading with his mom, “Let’s go home!”

But mom wants to stick it out. And frankly, so do I.

I Just Want My Pants Back
Thursdays, 10 pm (MTV)

MTV scores with this new comedy about post-college friends in New York City. The dialogue is pitch-perfect, tossing off cultural references with exquisitely tuned irony.

Brace yourself for a half-hour of pure raunch. “Do you think I’m a slut?” asks the one-night-stand who steals our hero’s (Peter Vack) titular pants. “Only in the best, most positive way,” he answers. Both the male and female singles think about sex all the time and have it all the time, joking about the subject in a low-key way that feels real. I prefer this frank treatment to the smarmy one you see on broadcast-network sitcoms.

In other words, I Just Want My Pants Back is sex-obsessed, but only in the best, most positive way.

New York Giants, New England Patriots, field position, yada yada yada. As an entertainment writer, I’m concerned with the halftime show, and this year’s—featuring Madonna—should be a doozy. In 2004, Janet Jackson accidentally caused tsunamis and earthquakes when her costume slipped for a second, showing a blurry bit of still-covered-up breast. Years of investigations, finger-wagging and fines ensued.

Jackson and Madonna had a legendary rivalry back in the day, with Madonna working hard to be the undisputed queen of cultural provocation. Is there any way she will pass up the chance to top Jackson’s “wardrobe malfunction”? If her show includes anything less than blasphemy, unnatural sexual acts and a same-sex marriage ceremony performed right on stage, I will lose all respect for her.

Lifetime has a knack for TV-movie murder mysteries that, while nothing special, are just intriguing enough to pull you in. In Secrets of Eden, a small-town detective (Anna Gunn) investigates a murder-suicide involving an abusive husband and his beautiful wife. The wife had recently been baptized by the town’s suspiciously good-looking pastor (John Stamos). Hmmm.

True, other suspects abound. But would the insanely sexy Stamos—in tight clothes and a $400 haircut—really have been chosen to play a holy man unless he were up to something unholy?

Either Stamos is guilty of something, or the Lifetime casting director has taken leave of her senses. 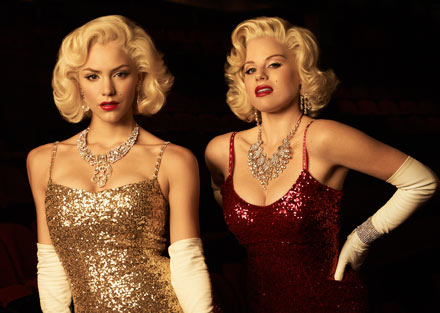 I like the idea of a backstage-Broadway-musical TV series, but the new Smash would better be titled Flop. A bunch of clichéd theater types (Debra Messing, Anjelica Huston, Christian Borle) search desperately for an unknown talent to star in their musical about Marilyn Monroe. They’re blown away by two of the contenders (Katharine McPhee and Megan Hilty), but the viewer has a hard time sharing their excitement. Both women are generic belters, with none of the certain something that made Marilyn so memorable. (For that mysterious quality, you’ll have to check out Michelle Williams’ performance in My Week With Marilyn.)

And no matter how many characters proclaim the musical’s songs “brilliant,” you just can’t buy it. Not with embarrassing lyrics like this: “Flash back to a girl with a song in her heart/As she’s waiting to start/The adVENture!/The fire and the drive/That makes DREAMS come alive/They fill her soul/She’s in conTROOOLLL!”

“Without a Marilyn we’re nothing!” a songwriter exclaims in the middle of the talent search.

Sorry, guys, but even with two Marilyns, you’re still nothing.

Best Movies of 2011: Our Film Critic Picks His Favorite Films