Moneyball toiled in production limbo for years, and it’s no wonder. A film about the quest for knowledge in the nuts and bolts of baseball management and player acquisition is not an easy sell. So it’s a small miracle that it’s such a satisfying and magnetic film. Anchored by Brad Pitt’s seasoned, charismatic performance as Oakland A’s manager Billy Beane, a precise script by Aaron Sorkin, and the subtle, eccentric direction of Bennett Miller (Capote), Moneyball joins the ranks of North Dallas Forty and Bull Durham, great sports films that exist both as provocative symbols and their own exquisitely interior fables.

There’s something incredibly exhilarating about Bridesmaids, a commercial comedy made by and starring women that gleefully annihilates all the exhausting, condescending tropes guaranteed in most “chick flicks.” Easily the most uproariously funny film of the year, Bridesmaids is smart enough to know it has two superstar performers on its hands—Kristen Wiig and Melissa McCarthy (whose character Megan instantly enters the pantheon) and takes a casual, laid-back pace almost akin to Hal Ashby’s great Shampoo. What gives Bridesmaids its staying power is a surprisingly unsparing self-reflection. At its core, it is a film about growing old, losing your dreams, hitting bottom, and ultimately, the elemental quality of friendship. 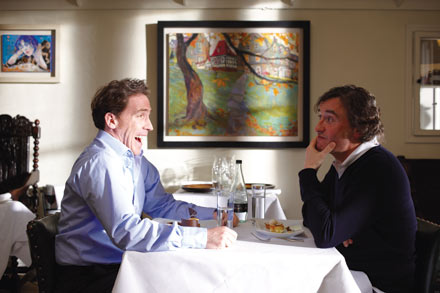 Steve Coogan and Rob Brydon embark on a food trip through the English countryside in The Trip.

If Bridesmaids was the most laugh-out-loud funny movie of the year, The Trip was the most cosmically funny. A sublimely simple road movie about two comedians (Steve Coogan and Rob Brydon) taking a food tour in the English countryside, The Trip plays like My Dinner With Andre filtered through a hall of mirrors of eerily brilliant impersonations. Coogan and Brydon play hilariously exaggerated versions of themselves: Coogan, an incredibly pompous, miserable womanizer; Brydon, an ever-optimistic family man who is constantly slipping into sterling mimicry (Sean Connery, Woody Allen, Michael Cain, etc.). Their sparring friendship/rivalry had the best comedic timing of the year. Like Bridesmaids, The Trip has a nervy heart, and in its own sly way is one of the most penetrating movies about fame and celebrity ever made.

There’s nothing quite like a great Woody Allen movie: breezy and effervescent as an elegant jazz record, distinctly refined and American. Allen returns to the well of nostalgia, his favorite haunting grounds, which have yielded such classics as Zelig, Manhattan, and Stardust Memories. But this time, Allen has the exceedingly good sense not to cast himself or any other anxious nebbish in the protagonist’s part. Instead, Owen Wilson and his affable Zen-frat-bro demeanor slide in and do wonders. Wilson may be the most appealing Woody Allen character since Michael Caine in Hannah and her Sisters. The film’s charming gimmick of magic time travel to the past mines both big laughs (Adrien Brody’s Salvador Dali cameo is particularly inspired) and a moving, clear-eyed affirmation to live in the present. 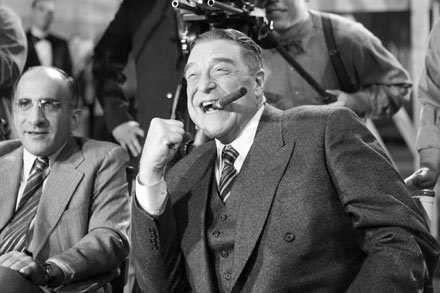 The spiritual twin of Midnight in Paris, The Artist is an exacting silent movie (yes, with flash screens of dialogue and all) about the transition from silent to talkies in the golden era of Hollywood. Making a ’20s-era silent film in the 21st century is a bold move—the dangers of  preciousness and whimsy are high (for proof, see a terrible film called Tuvalu). But The Artist is so obsessive and spot on in execution that it is a celestially perfect homage, illustrating an era’s timeless grace by lovingly recreating it. The Artist is also distinguished by featuring perhaps the greatest movie dog in memory—Uggie.

I love movies like Drive (and by association A History of Violence and Wild at Heart)—hyper-competent genre pictures made by eccentric film-obsessives who are smart and talented enough to know that you can revere and laugh at a trope in the same frame. Brutal, corny, and elegant—often in the same scene—Drive is a tripped-out samurai noir set amidst the ever-receding illusions of Los Angeles. Driven (sorry) by Ryan Gosling’s stately, near silent man with no name, Drive coils its existential death waltz around a precious miniature of revenge and selfless love. No film this year evoked as much contentious response except for Tree of Life. And with good reason: Drive is constantly shifting—in tone, sincerity, and temper. It’s an exhilarating and bewildering ride.

Alexander Payne has confidently assumed the mantle of Robert Altman and Hal Ashby, and in some ways represents the best qualities of adult American filmmaking—humor, empathy, and a tough sincerity unafraid to look at death, loss, and longing. The Descendants isn’t as funny as Election or Sideways, but it’s more affecting, and George Clooney has never been better in his most fearless and vulnerable role. The Descendants is one of the only films in recent memory to utilize the strange resonance of Hawaii, probing its history of kings and colony, without treating it as a simple paradise. 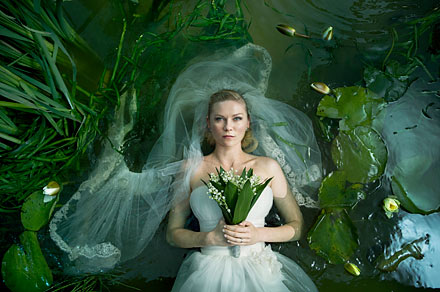 Say what you will about the hubristic shenanigans of Lars Von Trier, I personally think it’s a good thing to have a deranged, megalomaniacal genius director who makes colossally misanthropic bummers that are so sublimely creative they end up being weirdly uplifting. The heir apparent to Stanley Kubrick, Von Trier fuses his grim narcissism into a cosmic narrative that is dazzling. His best film since Breaking the Waves (probably the best not-talked-about movie of the ’90s), Melancholia is about a crippling depression and the literal end of the world. If that sounds bleak, well, it is, but also mordantly funny, gorgeous, and utterly confident in vision. Supported by two brilliant performances (Kirsten Dunst and Charlotte Gainsbourg) and a kind of dark glee to the countdown to oblivion, Melancholia is the 2001 of death trips. 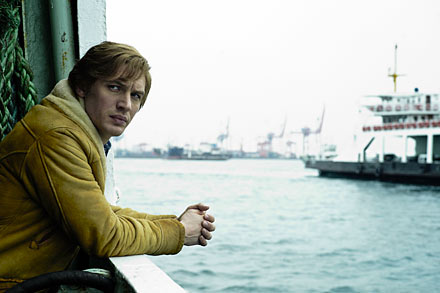 After seeing Tinker, Tailor, Soldier, Spy, I feel like Tomas Alfredson is the best director in the world. Not the most soulful, or creative, or ambitious, but the best in the same way Lionel Messi is the best soccer player. With his breathtaking skill and competence, Alfredson was born to make movies.
An adaption of the beloved John le Carré spy novel, Tinker is virtually flawless, a Swiss watch of film: every technical aspect is superlative, all the actors shine, and the respect shown to the audience is nothing short of deeply flattering. Navigating this beautiful maze is Gary Oldman with his knotty, wry performance as George Smiley, a super-spy whose failings  make his maneuvers all the more impressive. Richly detailed and layered, Tinker is akin to Coppola’s great Conversation, a tale of surveillance whose mysteries and riches seem near endless. 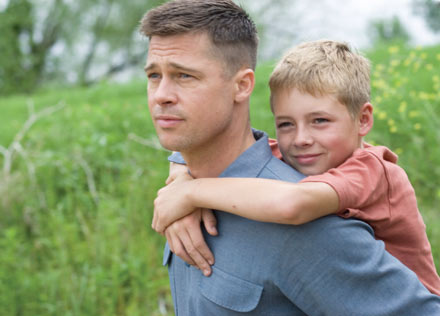 Unlike Tinker, Tree of Life is not a perfect film. Some of its visions are hackneyed, and Sean Penn is wholly wasted. Nevertheless, Tree of Life attempts, with beauty and artistry, to formulate a coherent narrative that connects the universe to an individualized experience and places familial tragedy in the arc of cosmic life. The result is one of the most emotionally affecting film experiences of my life, one that exceeds the media of film and stands alongside the great works of Stravinsky and Walt Whitman. In 2011, I had the pleasure of seeing a 70mm print of Lawrence of Arabia on a huge screen, and I remember thinking: “That’s not a film, it’s a monument, it’s the Brooklyn Bridge, it’s the Louvre.” Tree of Life is the same: it’s not a film, it’s San Chapelle, it’s Machu Picchu.

Worst Movies of the Year: The Reboot/Sequel/Prequel

The scourge marches on! X-Men, Captain America, Girl With The Dragon Tattoo, Sherlock Holmes, Straw Dogs, The Hangover, it never ends. In 2012 and beyond, we have Total Recall, American Psycho, Spiderman, and Blade Runner to look forward to. The big studios’ creative bankruptcy is beyond a joke now, only grim acceptance remains. When I lived in L.A., I estimated that there must be at least 100,000 hardworking, aspiring screenwriters in town. By even the most conservative estimates, at least ten of their scripts are good and commercially viable. I know it’s a business, but Hollywood is turning into a small-town office supply store with ads all over town blaring: “This just in, new and improved IBM Selectric typewriters.”

Going Native: "The River" is "Blair Witch" in the Amazon | The River Discovers Unnatural Phenomena in the Amazon

On a Regal Perch: Bald Eagle