MLK: The Assassination Tapes (Sunday, February 11, 8 p.m., Smithsonian Channel) re-creates the days before and after Martin Luther King Jr.’s assassination using contemporary TV and radio reports, most of them not broadcast since 1968. It gives you the feeling that you’re living through the civil rights leader’s last minutes along with the people from back then.

You’re right there on the Memphis street as police rough up protesters during King’s demonstration in support of striking sanitation workers. “There goes another tear gas canister,” notes a TV reporter on the scene. You’re listening to a police scanner seconds after the murder. “You are to form a ring around the Lorraine Hotel. No one is to enter or leave.”

Yes, it’s plunge back into hell. The only thing that makes the program bearable is footage of positive developments immediately following the tragedy. A group of white ministers, for example, had luck petitioning Memphis’s previously inflexible mayor on the sanitation strike: “We are persuaded that only when a spirit of flexibility and good will dominates can true peace and progress come to our city.”

It’s a small consolation, but I’ll take it.

Rihanna will wear a shockingly revealing outfit in a duet with Coldplay; Kelly Clarkson will hit an ear-shattering high note; and Nicki Minaj will don a two-foot-high pink wig. The ceremony will also feature performances by Paul McCartney, Adele, and Bruno Mars.

In other words, it’ll be a fun night, though also quite familiar. Nothing on the schedule promises out-of-the-ordinary thrills, like Florence and the Machine’s ecstatic “Dog Days Are Over” at the MTV Video Music Awards or Lady Gaga’s ash-smeared duet with Elton John at the Grammys a couple years ago.

This competition features the 16 worst cooks in America, as nominated by their long-suffering families. The cook who makes the most progress wins $25,000 (most of which, I suspect, will be spent on carryout food).

In the season premiere, the cooks make an inedible mess of pancakes with vanilla whipped cream and cinnamon maple syrup.

Here’s an idea: How about just adding more whipped cream and syrup? Now give me my $25,000! 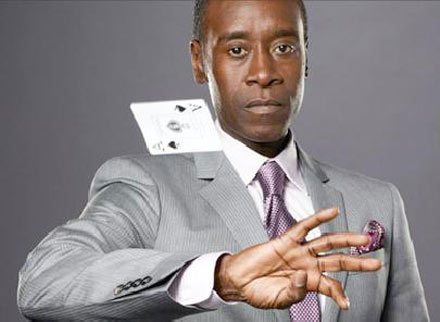 Don Cheadle stars in the dark comedy House of Lies, on Showtime.

This new series is a satire of the management-consultant racket. Don Cheadle plays a high-priced business expert (read: con artist) who convinces fat cats to waste millions on his team of MBA’s (Kristen Bell, Ben Schwartz, Josh Larson). It’s hard to root for the consultants, however, since they’re as grotesque as their clients. Cheadle’s character is a particularly unappealing antihero—foulmouthed, corrupt, manipulative, and heartless.

Can House of Lies convince TV viewers to keep coming back to see vile characters rip off other vile characters? I have a feeling that particular con won’t work on the American public.

This new reality series features “professional organizer” Amanda LeBlanc and her army of organizer-underlings, whom she creepily dubs “the Amandas,” after herself.

Amanda is a stickler for order—although “stickler” vastly understates it. “Dictator” or “psychopath” might be more accurate. She and her Amanda-bots descend on a normal family and begin color-coding their clothes. She goes ballistic if the spoon in the sugar bowl is not a designated “sugar spoon.” She even seeks to control what her clients wear in a grand plan to bend the world to her cracked vision of neatness. “Society has become too lax about its dress code,” she explains.

Watching this series makes me want to mess stuff up, striking a blow against the tyranny of Amanda LeBlanc. That’s why I will not end this paragraph with a period, but with @#$%*@0726532.

In the new season of History’s gun-shooting competition, marksmen compete for $100,000 and a professional contract. The contestants range from world champions to high school custodians, and the tension is extreme as they take aim at a variety of targets. The production plays up the drama with deafening music and running commentary from host Colby Donaldson of Survivor, who strikes a series of macho poses on the shooting range. The contestants’ relief is palpable when they hit a bull’s eye, as is their frustration when they don’t. The winner of Top Shot, one realizes, must have nerves of steel.

I’d normally attempt a critical assessment right here, but I’ve decided to skip it in this case. I’m afraid of missing the mark.