We had just returned from a week in Florida, and I was feeling a little sad as I read my notes about all the fun that was over now. Paging through my notebook, trying to remember exactly what we’d done each day, I came across something. It was a note I’d jotted before the trip about a psychology professor named Sonja Lyubomirsky who had received a grant from the National Institute of Mental Health to conduct research on the possibility of permanently increasing happiness. She was talking about travel. “Trips aren’t all perfect,” she said, “but we remember them as perfect.”

Do we? I thought. The trips that fill the most pages in my notebooks are the ones where things went wrong. What do they say? Only trouble is interesting? If the trip you remember was perfect, you can be pretty sure that no one wants to hear about it. If it was a perfect disaster, you’ll find everyone is all ears.

Just ask my husband John about the time he accidentally left his computer bag at our departure gate when we boarded a plane in Detroit. We were already in our seats when he talked the flight attendant into letting him go back for it, escorted by appropriate personnel. This is a story that involves both airport security and the Detroit Police Department. It includes lines such as “Step away from the bag, sir!” and “No, you can’t get back on the plane.” Oh, and don’t forget: “How would you like to spend a night in the Detroit City Jail?”

When John tells this story—which wasn’t a perfect disaster, since the bomb-sniffing dogs showed no interest in him or his computer bag, and in the end they let him get back on the plane—his audience is rapt.

Also riveting is the story of a “day trip” to Paris that John took on his own during our stay in Dublin one summer. His plan was to fly Ryanair to London, book a cheap hotel, and fulfill a long-held dream by taking the Chunnel train to Paris the following morning. After spending the day, he would ride the last train back to London and catch his flight the next morning to Dublin, where he would meet me for lunch after my class.

The trip began with a delightful breakfast on the train. John had just consumed a croissant spread with jam and honey (from little jars of each) and he was emptying the flagon (his word) of coffee into his cup when the attendant came by with her cart and whisked away his tray to make room for the second course! John delved into sausage and eggs and fat tomato slices, all but beside himself with joy. After breakfast, the descent of the train into the Chunnel coincided perfectly with his own descent into sleep.

Arriving at the Gard du Nord, he was undaunted by the rain—one of the ten French words he knows being, conveniently, the one for umbrella. He walked great distances in the rain, climbed the Eiffel Tower in the rain, sat in the rain where he and I once sat, under a different parapluie, on the quai at the tip of l’Ile de la Cite.

My husband John’s first attempt at a self-portrait at the top of the Eiffel Tower. 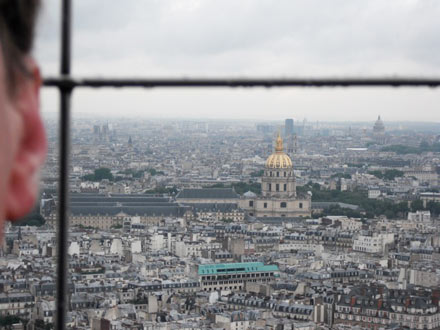 Then he walked back to the Gard du Nord. He found it strangely empty. Having forgotten that Paris and London are in different time zones, he had missed the train.

“Too late!” the station master told him in several languages. “Come tomorrow!”

Ask John and he’ll tell you about walking from hotel to hotel in the pouring rain of a Paris evening, looking for one that wasn’t booked solid by the influx of attendees at a weekend air show. Eventually, he had to pay for an expensive suite. He put on the fluffy white robe and hung his wet clothes on the radiators overnight. But here’s the thing about my husband John, a chronically happy traveler if ever there was one. By the time he was enjoying his second course on the first Chunnel train back to London, where he caught his 9:00 a.m. flight to Dublin and met me on time for lunch, he probably was remembering the whole trip as “perfect.”

Professor Lyubomirsky has done other happiness research, by the way. On her website she mentions a recent study in which participants were asked to increase their level of happiness by “practicing optimism” or “expressing gratitude.” I have chosen to do the latter, regarding our trip to Florida:

I am grateful to my daughter Liz and her husband Van for accepting the almost impossible mission of flying with a 16-month-old child. Traveling with David required his faithful retainers to tote three checked bags, a folding bed, a stroller, a carseat, a backpack (baby food, diapers, etc.), and a “mystery bag” of new toys to delight and distract. At least they didn’t have to carry a book or magazine, you know, to read on the plane.

I am grateful to David for being overwhelmed with delight by a plastic bucket full of water on the beach. He also knows how to press a cell phone to his ear and pace in a tight circle, talking nonstop baby babble with all the earnestness of a corporate deal maker. I thank him for that. And who wouldn’t be grateful for the great job he did of staying asleep while we sat in the courtyard outside his window to celebrate the last night of 2011 with beer and chips and shooting stars?

I am grateful to my son Jeff and to his wife Monika for buying a house on 1.25 acres outside West Palm Beach (so we could visit them in Florida instead of, say, Wisconsin) and for transforming their 1.25 acres into something like the little farmyards I saw in my grandparents’ village in Hungary. (Monika is from Hungary, too.) They’ve got flowers and vegetables, egg-laying chickens, brown ducks called Chocolate Runners, a hedgehog, three cats (one of whom lives with the chickens), and three dachshunds. The smallest of these is Peanut, a calm and matriarchal doxy, as they say, who oversees a varying population of cagelessly boarding dogs in small and medium sizes. There were 17 Friends of Peanut on hand (and on laps and couches) for the holidays, and it was amazing to see how peacefully they ranged through several rooms and large parts of the yard (though not the chicken part). Equally amazing was the noise they made when a doorbell rang or a car pulled up.

I am grateful to my daughter Lauren for making sure we watched plenty of Doctor Who from Jeff’s collection. I loved this not only because my children have been watching Doctor Who since they discovered him on IPTV 25 years ago, but also because it gave me a chance to get several good photos of my husband John—an excellent traveler but not, as he would readily admit, a lover of dogs—sharing the couch with multiple Friends of Peanut.

And of course we are all grateful to John not only for arranging our flights and accommodations and for driving the rental car, but for the sneeze that snuck up on him while he munched an after-dinner peppermint outside the Thai restaurant in Key Largo, sending hard white shards of candy flying out of his mouth. It was our daughter (thank you, Liz) who looked down at those white bits and pieces on the ground and said: “Holy cow, I thought those were your teeth!”

Mary Helen Stefaniak is the author of The Cailiffs of Baghdad, Georgia, winner of the 2011 Anisfield-Wolf Book Award for Fiction. She lives in Iowa City and teaches at Creighton University in Omaha.