In Best Friends Forever (Wednesdays, 7:30 p.m., NBC), Jessica (Jessica St. Clair) moves back in with her high school soulmate, Lennon (Lennon Parham), after a messy divorce. Only one problem: Lennon’s overgrown child of a boyfriend, Joe (Luka Jones), now lives in the apartment too. Jessica desperately tries to rekindle her BFF sisterhood with Lennon (watching Steel Magnolias, preparing fussy foodie meals) as if Joe weren’t there. But Joe is there – boy is he ever. He’s an oaf who can’t crack the Jessica-Lennon code, even when he tries to watch Steel Magnolias with them. “We don’t talk during the film!” Jessica snaps at him from the couch, where she and Lennon are sharing a blanket.

This wonderful new sitcom brings elements of Kristen Wiig’s Bridesmaids to the small screen. It features complex female relationships, with characters who feel real for all their eccentricities. The comedy is sophisticated, though not above gross-out moments. As in Bridesmaids, its creators/stars – St. Clair and Parham – are women with a background in improv and a keen insight into contemporary manners. St. Clair herself appeared in Bridesmaids, and apparently some of Wiig’s genius rubbed off on her.

“She’s just ruining everything!” Joe moans to Lennon after Jessica settles into their love nest.

Maybe for you, but not for the rest of us. 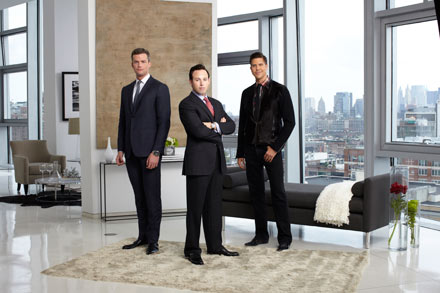 The spinoff reality series follows three real estate agents dealing in luxury Manhattan properties. Two of them are arrogant male-model types, often shown lathering their muscles in the shower before a day of work. (Clearly, Bravo owns a fair number of waterproof cameras.) The third is a pampered real estate baron’s son who chortles about the need to be politically correct during the economic downturn. “I have a list of words I can’t say,” he tells his father. They both laugh it up over the new banned term “prestigious.”

Whether they say it or not, the agents do traffic in prestige. They buy and sell apartments for people who own 1,000-plus pairs of shoes and will walk only on Carrara marble. Bravo must think we’ll find it amusing to gawk at the 1% in this era of Occupy Wall Street, but the people in Million Dollar Listing New York are so vile that it’s hard to do anything but fume.

Hunky Ryan brags about scoring with the previous night’s date, though he can’t remember her name. Even his loyal secretary says, “Ryan, you disgust me.”

That makes two of us.

In attempting to be one of the most serious shows of 2012, Scandal unintentionally comes across as one of the silliest. The new drama is about a D.C. crisis management firm headed by the supposedly all-knowing, all-powerful Olivia Pope (Kerry Washington), who can bend even the president of the United States to her will. The script crams relentlessly humorless, ominous dialogue in the characters’ mouths, to the point where nobody talks like a recognizable denizen of planet Earth. And the actors make the mistake of playing the material straight. They deliver every line with an impassive expression and a monotone, as if that were the way to make this kitsch seem important.

Did the filmmakers really think that rendering the characters as inhuman would be the way to our hearts?

I’m pretty worked up about the season five premiere, but a couple of martinis and a smoke ought to calm me down.