The community-college sitcom Community has been working hard to justify its existence since returning to the NBC lineup last month. This week (Thursday, 7 p.m., NBC), it offers a sublimely silly parody of fellow NBC series Law & Order and its spinoffs. The setup: A yam has been pushed off a counter in the science lab, ruining an experiment. Whodunit? The merciless script torpedoes every Law & Order cliché, from the investigation to the interrogation to the coroner’s report. Meanwhile, characters get cut off in mid-speech by that oppressive BOINK-BOINK sound effect. 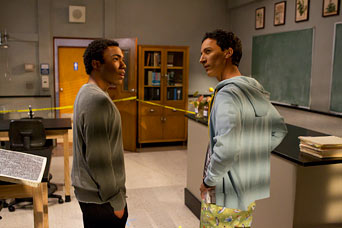 The satire is so devastating that I predict a tense encounter should the Community and Law & Order groups cross paths in the NBC commissary.

With their greed, brutality and lust – not to mention their Italian Renaissance duds — the Borgias make the Sopranos look practically modest. Neil Jordan’s The Borgias (Sunday, 9 p.m., Showtime), based on the powerful 15th century family, wallows in deliriously bad behavior in season two. Jeremy Irons is the quintessence of depravity as patriarch Rodrigo, who sees no reason to cut back on sex and plunder just because he’s become Pope. Rodrigo claims to have God on his side, making Him sound like the world’s biggest shakedown artist.

In this week’s episode, Rodrigo beds an ally’s wife, blackmails an army into giving all its spoils to the church (i.e., him), and instructs son Cesare (Francois Arnaud) on the finer points of vengeance. “Vengeance should always be unexpected,” he says in a characteristically un-Christlike moment.

In a meeting with Rodrigo, the king of France can barely mask his disdain. He addresses him as “holy father” but spits out the phrase like a curse.

Don’t be fooled by this new sitcom’s title, which shows restraint in abbreviating the “B” word. The show itself shows no restraint in terms of crudeness.

The plot is reminiscent of New Girl: a cute ditz (Dreama Walker) looks for love in the big city, surrounded by oddballs (including creepy roommate Krysten Ritter and James Van Der Beek as himself). The only difference between Walker and New Girl’s Zooey Deschanel is that she has no charm or comic talent. Okay, one other difference: She has terrible material to work with. This is one of those sitcoms where you can smell the desperation in the script. The writers try to get smarmy laughs from hookers and disabled people, along with using every term for “vagina” they heard at the frat house.

I just figured out what the “B” stands for: bomb.

Our drug-addicted heroine is suffering the tortures of the damned in season four. She entered rehab, left early, and now faces losing her kids while trying to keep up her duties at the hospital. Despite the grim scenario, the series retains its low-key comic elements. This week, in fact, the comedy is veritably high-key, thanks to guest star Rosie Perez. Perez plays Jule, a live-wire patient who, with only a few months left to live, grabs for all the gusto she can. She makes even Jackie smile, and that’s quite a feat these days. (Question: Why doesn’t Perez have a sitcom vehicle of her own?)

As they part ways, Jule hands Jackie a bottle of Vicodin she doesn’t need anymore. Jackie pockets it, then throws it in a trash bin, then jumps into the trash bin to retrieve it, then reluctantly decides to leave it in there.

Yep, it’s going to be that kind of season.

I’ve always considered Jesse Owens’s triumph at the 1936 Berlin Olympics one of the most beautiful sports stories ever told. Adolf Hitler had planned the event as a showcase of Nazi superiority, and the African American track star ruined it for him by winning an astonishing four gold medals against Germany’s finest. On top of that, Owens represented the U.S. with grace and eloquence. As I said, beautiful.

But I didn’t know all the details until this week’s American Experience. It turns out that the head of the U.S. Olympics Committee was a fan of the Nazis. When Hitler requested that the U.S. remove Jewish sprinters from the 400-meter relay race, the team complied, subbing in Owens over his objections. The racial ugliness continued when Jesse returned to the States after his victories, expecting to be treated as a hero. Instead, New York City hotels refused to put him up because of his skin color.

Man, this country sure has a way of spoiling a beautiful sports story.

Tornado Club: A Dream Title, by Candance Booth | The Return of My Movie Dreams