Get some fresh air while you commute to work!

Bicycle commuting should be taken more seriously as an inexpensive, alternative form of transportation. According to the U.S. Dept of Transportation, most car trips are surprisingly short: 50 percent are less than 3 miles. Given that these “stop-and-go” trips (to the bank, grocery store, or a friend’s house) lower your mpg and cause more wear and tear on your vehicle, most of us would be far better served by making these jaunts by bike.

Americans may soon realize these same short trips by bike can save not only gasoline but overall operating expenses. The average American household spends $7,179 per year on owning and driving a car. Trimming one vehicle from your two-car household can save you $340 a month!

Bicycle commuting reduces road congestion and air pollution, especially in the larger cities. Traffic congestion wastes nearly 3.9 billion gallons of gas per year in the U.S, and according to the EPA (2009), every 1 mile pedaled rather than driven saves nearly 1 pound of CO². In addition, the majority of Americans drive alone in their cars every day.

Data released by the U.S. Census Bureau’s American Community Survey (2010) show that only 0.5 percent of Americans use a bicycle as their primary mode of transportation to work. While this number represents nearly 40 percent commuter growth since 2000, it also shows that we still have a lot of work to do in making our communities truly welcoming to bicyclists.

Dave Horton, lead researcher of the “Understanding Walking and Cycling” study, wrote: “Many people barely recognize the bicycle as a legitimate mode of transport; it is either a toy for children or a vehicle fit only for the poor and/or strange.”

Despite these dismal stats, the good news is that bicycle commuting has actually increased (as reflected by higher bicycle sales) over this past decade now that higher oil and gas prices are likely here to stay. But America still has a long way to go. To create a thriving bike culture in our towns and cities, Americans must change their attitude and begin to view bicycling as Europeans have done for years—not just as recreation or a way of keeping fit, but as a serious form of transportation that is just as dignified, if not more, than commuting by car.

Although bicycling is a reliable, healthy, fun, and cheap way to commute, myths about bike commuting still linger. So here are the four most common ones I’ve heard over my many years of commuting in and around Fairfield.

Bikers do crash and some get hit by cars. But how dangerous is biking compared with other forms of transportation?  The answer is a lot less than you might think.

Consider the calculations of a company known as Exponent that performs safety and failure testing. The company determined that the number of fatalities per million hours of exposure was 0.26 for biking, 0.47 for driving, 1.53 for living (all causes of death), and 8.80 for motorcycling. In other words, they found that the risks of biking were about half that associated with driving and a sixth of that associated simply with being alive!

Now, for the sake of argument, let’s assume that this study was a gross underestimation and consider another report that measures bike risks using a different yardstick—the number of fatalities per millions of kilometers traveled. The Rutgers University researchers who completed this study concluded that, per kilometer traveled, bicycling fatalities are 11 times as high as car occupant fatalities. Now, from this perspective, this sounds pretty grim for bicyclists until you look at what the same study found about walking. Pedestrian fatalities per kilometer traveled were 36 times as high as driving fatalities, suggesting that walking is more than three times as dangerous as biking.

Other national bicycling organizations found that only 1 percent of fatalities occur by the biker getting hit from behind by a car, whereas the majority occur at intersections. Interestingly, for serious bike/car collisions, 85 percent of court cases find the biker primarily at fault, suggesting that bikers need to show more improvement in obeying the laws of the road (such as stopping at signs, riding on right side of the road with traffic, or using hand signals to turn).

Lastly, consider that there is safety in numbers: the more experienced bike commuters ride the roads, the safer bicycling will become.

Let’s face it, if you live more than 10 miles from work, biking may take too long. However, as I mentioned earlier, in the U.S., 50 percent of all trips by car are less than 3 miles. For big-city commuters, it may be more challenging, but there are ways to expand your travel range. For example, use folding bikes so they can go partway on a commuter train. Within city limits, many municipalities are now allowing bikes on buses or subway cars, too.

Not true. You should be able to get a new or used bike of lasting quality suitable for both basic commuting and recreational riding for less than $500, including some basic accessories. Go to your local bike shop with a knowledgeable staff (not a department store), explain the terrain and length of commute you’re planning, and they will be happy to help you choose the appropriate bike. Remember, with the overall savings by using your car less or getting rid of your second car, your new bike can pay for itself in a few months.

Perhaps you don’t have the right bags on your bike. Good quality rack packs, seat bags, or touring panniers will mean you can easily carry a laptop, change of clothes, lunch, a few books, a slew of folders, and whatever other gizmos you regularly carry. If you really do need to carry a heavier load more frequently, you may want to consider buying a bike trailer.

Where Do I Start?

Okay, now you’re convinced of the  merits of bike commuting. What kind of bike do you need? Nowadays, most major bike manufacturers have a wide array of good quality “city commuter” bikes. These bikes usually have an internal geared hub of 3, 5, 7 or 8 speeds (no derailleurs) with easy user-friendly shifting on the right handlebar grip and the ability to shift when completely stopped. They have a more upright bar and stem for riding in city traffic and many now come with a suspension fork, although unless you are going to be travelling on very rough roads or jumping city curbs, you can save cost and considerable weight with just having a steel or aluminum fork.

The higher price of most of these more thoroughbred city commuter bikes includes all the most important commuter accessories, such as full fenders, a rear rack, bell, chainguard, kickstand, and a generator lighting system. The only accessories you would need to buy would be baskets, panniers, or a backpack for carrying your belongings.

(Get more info on equipment for safety, like bike helmets, lights, bells, and more.)

Now that spring is in full bloom, why not pull out your bike and go for a spin. For those who are not in the habit of bike commuting, I would suggest gradually and easily changing your habit by biking the shortest distances a few times a week (1-2 miles at a time). After slowly increasing your time on the bike, there will come a point where it will become almost like a bionic extension to your body. You’ll feel a greater freedom of the outdoors, breathing fresher air and appreciating more  scenic details along the way. 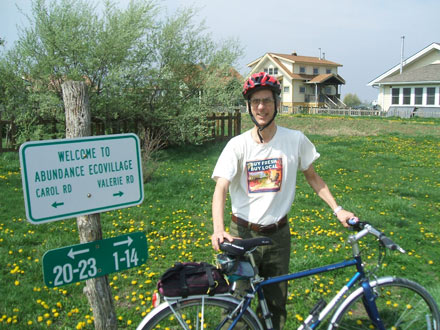 John Salerno averages 2,000 commuter miles per year on his bike!

Fairfield bike commuter advocate John Salerno rides two miles from his home in Abundance Ecovillage to the MUM campus and back twice a day and four miles to Maharishi Vedic City and back three times a week.