Theater and Performing Arts: Eastern Iowa
May 8, 2012
by Claudia Mueller
0

Built in 1937 as Burlington’s first sound-equipped movie house, the Capitol Theator closed in doors in 1977. After decades of neglect, the restored venue opens again on June 1, 2012.

On June 1, 2012, Burlington’s Capitol Theater will officially reopen after more than three decades. Built in 1937 as the town’s first sound-equipped movie theater, this art deco jewel is one of only two surviving theaters by Iowa architects Wetherall and Harrison. 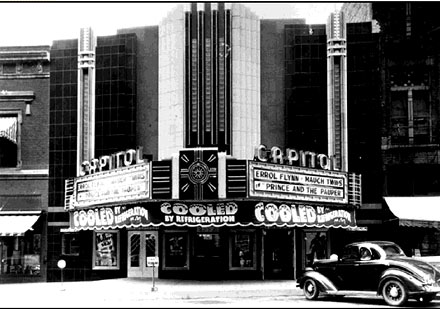 An early photo of the Capitol Theater shows one of its summer selling points: "cooled by refrigeration."

Back in July 1937, when the Capitol first opened its 700-seat venue, it screened the Errol Flynn classic The Prince and the Pauper. Forty years later, the last film to show was the 1977 horror film Carrie. Immediately after its closing, Burlington citizens, who had fond memories of the movie palace, began dreaming of a way to bring it back to life.

Efforts were begun in the late 1980s and mid 1990s. But it wasn’t until 2003 that the Burlington Downtown Partners started a restoration campaign with the Friends of the Capitol Theater, as part of a downtown revitalization effort.

In April 2005 the Friends group was reformed into a 501(c)3 organization called the Capitol Theater Foundation of Burlington Iowa, with Becky Anderson as its first president. As their first major accomplishment, they not only purchased the theater at 211 North Third Street, but also the former Iowa Southern Utilities building next door.

Things kicked into high gear in late 2010 when the foundation was awarded an Iowa I-Jobs grant of $1 million. In May 2011, Myers Construction of Burlington began renovating the two buildings. In June 2011, the foundation launched the Bring Back the Magic campaign to raise an additional $1 million. Led by Burlington’s Dennis Wilson, the fundraising committee exceeded their goal and raised $1.2 million by November 2011. The Foundation also secured $94,000 from a Historic Site Preservation grant and $368,000 in tax credits.

About that same time, the Foundation hired John Speer as its first executive director. Speer had served on the theater’s program committee and is still active as an adjunct film, speech, and theater instructor at Southeastern Community College in West Burlington.

On Friday, June 1, 2012, the doors to the Capitol Theater and Performing Arts center will officially reopen to the public. The Grand Opening Event will feature a world premiere showing of the award-winning short film Good Luck, Mr. Gorski, by Allegra Huston, who will be in attendance. Huston is the daughter of Hollywood legend John Huston and sister of actress Angelica Huston. Also performing at the grand opening are a number of talented regional musicians.

The evening’s theme, “Fly Me to the Moon,” honors Burlington-born Bart Howard’s June 1 birthday. An accomplished songwriter and cabaret performer, the late Howard wrote Frank Sinatra’s personal favorite song, “Fly Me to the Moon.” Tar Lupo, who performs the song in Huston’s film, will be on stage June 1 to sing the song live, accompanied by pianist Mark Moore.

The movie and the concert will be repeated on Saturday evening, June 2.