﻿Twilight Saga: Breaking Dawn, Part I won two nominations, one for Movie of the Year. We’re guessing the other one is for Best Kiss? (photo by Summit Entertainment)

As always, February’s stiff Oscar ceremony tried to dress the movie industry in an ill-fitting tuxedo. The MTV Movie Awards, by contrast, reminds us that the medium is supposed to be fun (Sunday June 3, 8 p.m.). 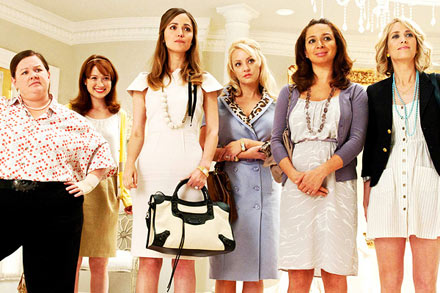 ﻿Bridesmaids leads the pack in the MTV Movie Awards with eight nominations, including one for best cast. (photo by Universal Pictures) 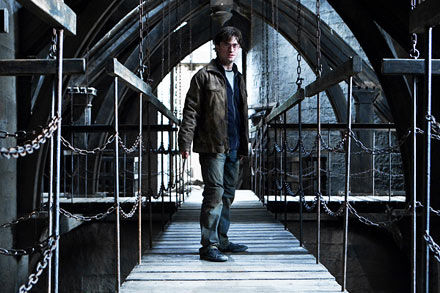 ﻿Harry Potter and the Deathly Hallows, Part IIpicked up six nominations, including one for Movie of the Year. (photo by Warner Bros)

Jon Hamm (Bridesmaids) is a favorite in the Dirtbag category, though tonight he may get a run for his money from host Russell Brand, who’s no slouch in that department himself.

“Melissa & Joey was recorded in front of a live studio audience.”

That old-school voiceover at the beginning of each episode is disarming. It lets you know that the laughter you hear throughout is real – i.e., earned. It also lets you know that Melissa & Joey will affirm the sitcom genre’s verities: a brisk pace, a pleasant tone, a setup/punchline rhythm. This is just what the doctor ordered after all those broadcast-network sitcoms that strain to be hip and edgy and just end up making you squirm.

I’m all for hip and edgy sitcoms that actually work (see Girls), but in the meantime I’m happy to while away 30 minutes the old-fashioned way with Melissa & Joey. Melissa Hart and Joey Lawrence are sitcom veterans who know how to deliver a joke with the proper snap. She’s a high-powered professional, he’s her live-in nanny, and season two finds them still in the insult-banter phase of their relationship.

The season’s first episode didn’t exactly make me laugh out loud, but my smiles were real.

Walt Longmire (Robert Taylor) lives in the modern age, but he comports himself like Wyatt Earp as sheriff of a Wyoming county. Walt shuns cell phones and computers in favor of stalking crime scenes in a cowboy hat and tersely demanding answers.

We’re supposed to admire this old-school machismo, but I couldn’t help thinking, “No cell phones or computers?” I mean, there’s manliness, and then there’s stupidity. It doesn’t help that Taylor has only one mode: flinty. He communicates no warmth, no humor, no humanity, despite the script’s attempt to give him a tragic widower’s backstory. (It’s very possible that his wife died of boredom.)

“I’m only gonna wait so long for you to crack a smile,” says Walt’s Native American pal (Lou Diamond Phillips).

He could well wait all season.

Bravo takes the traditional approach for the fifth season of The Real Housewives of New York City: put catty, wealthy, surgically enhanced women together and watch the sparks fly. Women like Ramona, who prides herself on telling people off: “I’m not afraid to say what everyone else is thinking!” she brags. All we viewers have to do is sit back and wait for one of these provocative statements to kick off a battle royal. 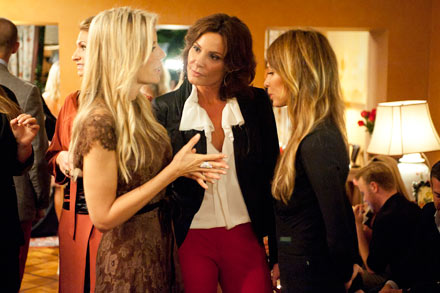 In the season premiere, however, the battle never arrives. A few of the Housewives gamely try to pick a fight, but it’s paltry stuff. Nobody screams, or overturns a table, or even issues a threat. Ramona hosts a party – usually a surefire way to get Housewives throwing Pinot Grigio at each other – and everybody has a distressingly nice time.

Nice times on The Real Housewives of New York City? I’m going to say what everyone else is thinking: One of these women had better call another one a slut, and fast.

Franklin & Bash
Tuesdays, 9 pm (TNT)
TNT’s legal dramedy is Animal House in a courtroom. Mark-Paul Gosselaar and Breckin Meyer play hard-partying lawyer dudes who stick up for the underdog while making a mockery of the judicial system. They chase women, pull outrageous stunts to win their trials, and refuse to let their serious jobs make them grow up. In the second-season premiere, Franklin and Bash are inexplicably offered partnerships in a big firm, angering their straitlaced coworker Damien (Reed Diamond). “Do not allow me to get in the way of moronic justice!” he sneers.

Franklin & Bash is fast-moving, funny and easy to watch. At the risk of sounding like Damien, however, I have to protest the treatment of women as sex objects. In this week’s episode, it’s a female cop with Playboy curves and an unlikely openness to Bash’s crude come-ons.

I know the show is supposed to be a silly fantasy, but in this particular case I feel obliged to get in the way of moronic justice.