The Buddha house near Lansing, Iowa, is the new home of a 7-foot carved-wood Buddha statue from Burma.

Most people may not immediately associate Buddhism with the rural Midwest, but a Buddha statue rescued after a typhoon in Burma has found a new home on the bluffs overlooking the Mississippi River in Northeast Iowa.


The public is invited to attend a consecration ceremony for the statue and its new home on Monday, June 4. The event is free, and you don’t have to be a Buddhist or know anything about Buddhism to attend. Everyone is welcome.

The new Buddha House is located on the Saraswati Bhawan Peace Mandala site between Lansing and New Albin, Iowa, at 1781 Views End Lane, Lansing, Iowa 52151. At 10:00 a.m., there will be a ribbon cutting ceremony and prayer flags will be raised, followed by a buffet luncheon and raffle drawing at noon. A Buddha "tsog" will be celebrated at 1:30 p.m. and guests are welcome to remain for this traditional Buddhist ritual if they wish.

The Buddha House is the first building of the Peace Mandala Project, the vision of renowned Buddhist teacher Lama Dawa Chhodak Rinpoche to help answer the challenges of war, ecological imbalance, and the health crises that beset our modern age. 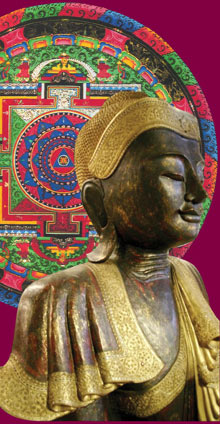 This seven-foot-tall Burmese statue, which was rescued from a destroyed temple and sent to the U.S., has found a new home in a quiet spot overlooking the Mississippi.


The beautiful Burmese statue is a seated figure of Shakyamuni Buddha approximately seven feet tall, carved out of wood and decorated with semi-precious stones. After a typhoon destroyed its original temple in Burma, villagers asked a dealer to rescue the statue. It was shipped to the United States and sat in storage until Saraswati Bhawan bought it and built its new home. The Buddha House itself was designed by Lama Dawa Rinpoche’s brother, Pema Dorje Rinpoche, and built by Wild Rose Timberworks of Decorah, Iowa, and Mauss Home Improvement of Lansing, Iowa.

Lama Dawa Chhodak Rinpoche, who was born near the border of Tibet and Nepal and educated in India, now makes Northeast Iowa his home. This approachable, down-to-earth teacher received a traditional Buddhist education, earning the rank of Acharya, which is equivalent to a Ph.D., from Sanskrit University in Varanasi, India. He has been instructing students throughout North America since 1989 and founded Saraswati Bhawan, a nonprofit Buddhist organization, in 2007.

Lama Dawa Rinpoche and his wife Judith Hitt (Khandro Kunzang Dechen Chodron) moved to Lansing, Iowa, a few years ago. Rinpoche explains that he was attracted to the Lansing area, which is situated in the Upper Mississippi Wildlife Refuge, by the same beauty and positive spiritual energy that prompted Native Americans to build mounds there 1500 years ago.

His nonprofit organization, Saraswati Bhawan, purchased the land just north of Lansing where the Buddha House will be consecrated, and where they also plan to build a temple to house a Mandala for World Peace.

Mandalas are symbolic representations of the universe and Americans are probably most familiar with the beautiful two-dimensional mandalas that Tibetan monks make from colored sand. The temple mandala will be a three-dimensional version, which is far more rare. Mandalas are thought to create blessings of peace and harmony, which Lama Dawa believes are urgently needed in these uncertain times. The location of the temple overlooking the Mississippi River was selected because, in the Tibetan Buddhist tradition, it is believed that building such a temple near a major waterway will help spread its blessings far and wide in order to benefit all of North America and all beings.

Several individuals and businesses from the community have contributed items for a raffle that will be held during the luncheon on June 4. Local artist Fred Easker donated a print, "Lansing Twilight." The beautiful Thornton House B&B in Lansing donated two one-night stays. T. J. Hunters Restaurant in Lansing and SUTRA by Design each contributed a $25 gift certificate, and Diane Ansel offered two Tibetan salt lamps. The suggested donation for raffle tickets is $10 each, 3 for $25, or 15 for $100. Tickets can be purchased the day of the event, or online at saraswatibhawan.org.

To get to the Saraswati Bhawan Peace Mandala Site at 1781 Views End Lane, Lansing, Iowa, drive north from Lansing about five miles on IA-26. On your left will be a dirt road called Spring Valley Drive. Turn left onto Spring Valley Drive and drive to the stop sign at the top of the hill (a T-intersection with Cedar Hill Road, about 1 mile). Turn left onto Cedar Hill Road. In a few hundred yards, turn left onto Point Vista Lane, the entrance to The Preserves. Stay straight on that road and it will become Views End Lane and ends at the Peace Mandala site (about 1 mile).

For more information on the June 4 Buddha House Consecration and raffle, Lama Dawa, Rinpoche, or the Peace Mandala Project, visit the Saraswati Bhawan website at www.saraswatibhawan.org, call 563-538-4510, or email info@saraswatibhawan.org.