The Walter house is open for tours for the 2018 season, Wednesday through Sundays, 10 a.m. to 3 p.m. through October.

In the minds of many Midwest travelers, Frank Lloyd Wright is more connected to the state of Wisconsin, but Iowa has a number of notable Wright-designed houses and buildings. The Agnes and Lowell Walter home at Cedar Rock State Park, outside Quasqueton, is a particular gem. Sitting on the brow of a hill overlooking the Wapsipinicon River, the house commands spectacular views of the grounds and river. 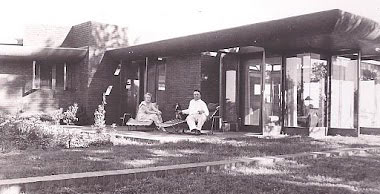 Agnes and Lowell Walter on the porch of their home.

This summer, you can tour the home, see the original furnishings that Wright chose himself, and visit the Wright-designed boathouse on the Wapsipinicon River, every Wednesday through Sunday, in Cedar Rock State Park.

The Walter house is a prime example of Frank Lloyd Wright’s 1950s Usonian-style homes, which the architect created in response to the need for inexpensive homes for ordinary people, rather than his usual wealthy clients. The single-story homes are centered on the hearth, with two wings—one public wing for the living areas for the family, and one private wing for the family bedrooms.

Like many Wright homes, Cedar Rock has large windows and deep eaves.

At Cedar Rock, the open central living room features walls of windows on three sides, flooding the space with light and minimizing the separation between inside and outside. In contrast, dense brick walls anchor the house.

Completed in 1950, the Agnes and Lowell Walter house carries Wright’s distinctive red signature tile, which indicates that Wright approved all aspects of the house, from the furniture and piano to the dishes and the decorative touches. Few homes, and only the Walter  house in Iowa, display this simple red tile that bears the architect’s initials, FLW.

The Wright-designed furniture combines ingenious shapes with improbable materials. Wright selected plywood for the built-in sofa and chairs, with nubby natural fabrics in cream, rose, and sage for the upholstery. To complement the interior’s  textures, Wright personally selected the choice of plants—fuzzy African violets, dieffenbachia, and philodendron. The plants currently on display have been propagated from the originals.

If you sign up for the tour, you can ask the docent what it took for Wright to allow Agnes Walter to bring her treasured Tom and Jerry toddy set into the house, and what Steinway Pianos did to help the piano both fit the Walters and their Wright home.

In addition to bearing Wright’s signature tile, the Cedar Rock property has another claim to fame: the Wright-designed boathouse. Perched on the Wapsipinicon River bank, the River Pavilion offers boat storage and a launch, along with a nozzle for a post-swim rinse. 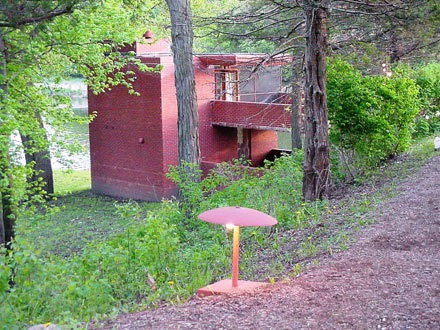 Wright designed the boathouse at the same time as the home. (photo by Carl Thurman)

Inside the Pavilion, second-story walls of glass and brick echo those of the house.   The central room holds a chair and twin bed, as well as a built-in desk, small fireplace, and some storage. A restroom, screened porch, and deck complete the second floor. After a day boating on the river, Lowell Walter used the porch for card games or cigar smoking on summer evenings, an ideal man cave for the 1950s. 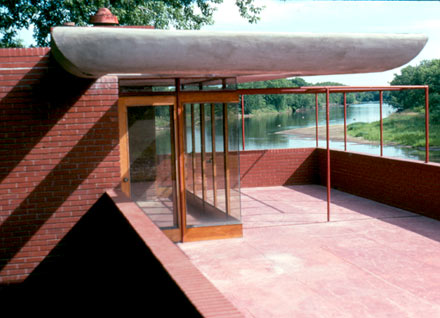 Overlooking the meandering Wapsipinicon River, the boathouse was a favorite spot for Lowell Walter to host summer card games. (photo by Carl Thurman)

While Wright designed hundreds of boathouses, few were built, and rarer still is both a boathouse and house built for the original homeowners, which is the case at Cedar Rock. In fact, Wright boathouses have generated such interest that a group in Buffalo, New York, recently built the Fontana Rowing Boathouse from his Cedar Rock design. The only other remaining boathouse in the Midwest is the Henry Wallis Summer Residence in Delavan, Wisconsin, but it is a reconstruction rather than the original. The River Pavilion at Cedar Rock is unique in that it is one of only two boathouses that appear to have been built around the time that the homes themselves were constructed.

If you are planning a trip to tour Wright structures in Iowa, the Stockman home and the newly renovated Park Inn Hoteland and City National Bank buildings, all located in Mason City, provide interesting contrast to the Walter home.

Iowa's Summer Festivals 2012 | Music, Arts, Food and More for Everyone