This essay is reprinted from The Burg: A Writer’s Diner, edited by Marybeth Slonneger, a collection of essays and photos honoring Iowa City’s renowned literary diner, the Hamburg Inn #2.

Patrons and wait staff at the Hamburg Inn in the 1960s.

My relationship with the Hamburg Inn began before I ever set foot in the place. I was back in Milwaukee with the kids when my husband set out, a one-man scouting party, to find in Iowa City (1) a job, and (2) just the right counter-service restaurant to replace the breakfast-and-burger joint that had served as my office in Milwaukee. He was successful on both counts. I can still remember how happy he sounded when he called me to report that he’d spent a couple of precious dollars on a hamburger and coffee at this place called Hamburg Inn No. 2. It had a counter and booths, he said, and there were people reading and writing all over the place, especially at the counter. Also, the food was good, and the waitress had refilled his coffee cup before he thought to ask. Want a whole weekend of jazz or blues? We’ve got it! Want rides, fireworks, and parades? We’ve got that too! Plus a bunch of other fun stuff to keep you and your family entertained this summerAll I had to report was that my mother still couldn’t believe we were taking her grandchildren to Idaho.

It was 1982. In those days, the daytime waitresses tended to be women of a certain age. There was Micki, who was famous for remembering the “usual” of all her regulars even long after they’d finished school and left town; and Millie, who inspired so much loyalty and affection in two of her regulars—my friend Nancy Loeb and me—that when we heard she’d had a heart attack, we visited her in the ICU. We attempted to serve her a glass of ice water, but, lacking waitress skills of our own, we spilled it all over her instead.  The monitors went wild.

The way I remember it, Dave and Mike Panther were always on hand, brothers and heirs to the kingdom. Mike was taller, broader of shoulder, louder of laugh; Dave was the quieter of the two, his inner clown waiting to emerge. Among our favorite waiters were Gary, your friendly lunch­time waiter, politico, and public access TV personality; Steve, greeter of presidents past, future, and hopeful; and Paul, the one who changed his name to Gabriel after a while and always made himself into a very convincing waitress for Halloween. 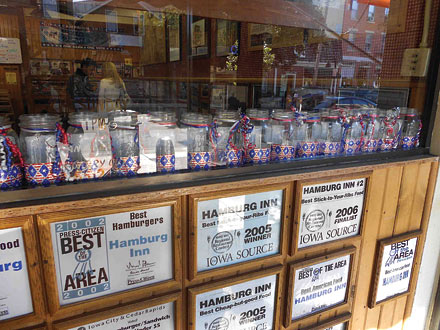 Coffeebean caucus jars line the window in 2011. Note the awards from the Iowa Source Restaurant Contest, too! (Photo by Marybeth Slonneger)

Paul/Gabriel freaked my mother out one time, while she was visiting from Milwaukee. She and Lauren, who was four or five, were strolling on the pedestrian mall one day when a leather-jacketed man with multiple ear-studs approached them and asked Lauren in his snickery voice what she was up to today. There was something about Paul—and I hope he would be pleased to hear me say it—that suggested both Ron Howard (as Opie on The Andy Griffith Show) and Truman Capote. My mother was alarmed by the leather, the hardware, and what she saw as the leer on his face.

“Don’t worry, Grandma,” Lauren reassured her. “Paul is one of my adult friends.”

My children grew up with—or should I say, at—the Hamburg Inn. They were seven, four, and one-and-a-half when we came to Iowa City so that I could attend the Writers’ Workshop. The combined financial blow of graduate school, moving to another state, and quitting our jobs (!) in Milwaukee left us with little—actually, with no—money for fun or child care.   John found a job that allowed him to come home a little early on Tuesday afternoons so I could go to workshop, and I stayed home with the kids the rest of the week.  Weather permitting, we often roamed the streets, the kids and I, Lauren in the stroller and Elizabeth toddling along—Jeff, too, if school was out. Many were the times we wound up at the Burg, sharing a booth and an order of pancakes. Jeff won a potato clock during a promotion that involved weekly drawings for prizes. The more often you came in, the better your chances.  It worked, too. The clock, I mean. The electricity came from two potatoes.

When Elizabeth was six and afraid to eat anything for fear of swallowing the baby tooth hanging by a thread in the front of her mouth, I took her to the Burg to entice her with a bowl of brown-sugared oatmeal. This was one of her favorite foods and, our waiter noted, one that she didn’t need to chew. I will never forget the grateful way she looked up at us after her first mouthful, smiling bravely through her tears. The tooth was gone. 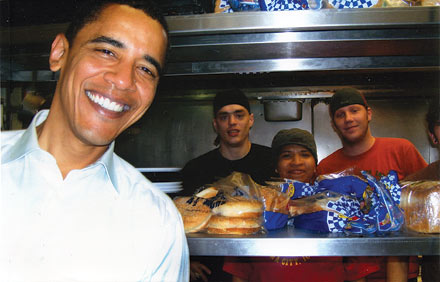 While campaigning in 2008, Barack Obama visited with the cooks at the Hamburg Inn.

Years later, when Liz was in high school, she arranged to surprise her boyfriend with dinner at the Burg on Valentine’s Day. I have a picture of them at the Presidential table, elegantly set with white tablecloth, candle, and a vase of fresh flowers, their waiter standing by in a secondhand tuxedo jacket and bow tie, a white towel folded over his arm.

Liz was not the only Stefaniak to host a special occasion at the Hamburg Inn. When my first book came out, Prairie Lights owner Jim Harris came up with a great marketing idea. We’d have a drawing on the night I read at the bookstore, the prize a free breakfast with Jim Harris and the author at—you guessed it—Hamburg Inn No. 2. You might have had to buy a copy of Self Storage and Other Stories to enter, unless that was illegal in the state of Iowa, in which case, of course, no purchase was necessary.

But my literary relationship with the Burg goes back farther than that. My very first author event in Iowa City—an after-hours reading with two poets—took place at the Hamburg Inn on a Thursday at 11:30 p.m., according to the flyer still hanging on the bulletin board in my husband’s office. The poets were Nancy Loeb of Tuscaloosa (she who helped me spill ice water on Millie the waitress in the ICU) and John Marshall of Seattle.

While one of us used the seat of a centrally located booth for a stage, the other two served free coffee and apple pie at cost. Our publicist, fiction writer and fellow workshopper Brent Spencer, designed the flyer in the manner of a menu, featuring dishes with punning names that honored writing and writers, especially those connected with the Workshop.

My mother came to know Iowa City quite well over the years, but during her most recent visit—the first since she’d had a stroke that compromised her short-term memory—she had to be reminded frequently of where she was, namely, Iowa City, and why. When we asked her if she wanted to eat at the Burg, we expected the little frown, the puzzled pause. Instead, after barely a moment’s thought, she said, “Home fries for me.” Her usual.

Iowa's Summer Festivals 2012 | Music, Arts, Food and More for Everyone