﻿Love in the Wild competitors Shauna Dillard, Ryan Smith, and Christian Seklecki compete for love in the Dominican Republic. (Photo by Trae Patton/NBC)

Love in the Wild (Tuesday, 7 p.m., NBC) is a huge improvement over The Bachelor and other dating series that get all dewy-eyed about true love. This one just sets out to have fun, mostly at the expense of its hapless contestants.

The young hotties trudge into the Dominican Republic wilderness and endure absurd challenges, supposedly for the purpose of finding a soul mate. We get to laugh at the obnoxious guys as they show off with would-be manly feats. And we get to laugh at the obnoxious gals as they fall for it. “When someone can throw a coconut that well, it’s a turn-on!” cries a woman named Yanina. A relationship based on coconut-throwing prowess – how long do you give it? 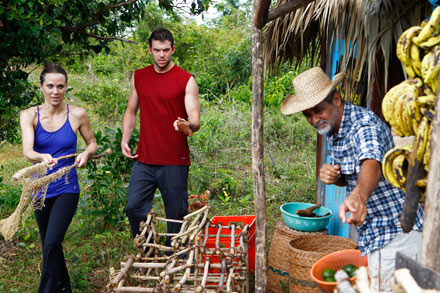 ﻿Shauna Dillard and Ryan Smith in the June 12th episode of Love in the Wild. (Photo by: Trae Patton/NBC)

Love in the Wild is boosted immeasurably by host Jenny McCarthy. Now pushing 40, McCarthy is as saucy as ever, setting a mocking tone without being mean-spirited. If I were out there in the wilderness, I’d ditch the contestants and make a play for Jenny.

A&E has discovered a reality-series gold mine deep in Louisiana bayou country. Cajun Justice follows the sheriff’s department in colorful Terrebonne Parish. This is a swampy, broken-down place where every deputy has a savory nickname (Funkie Nuts, Catfish) and where almost every police call involves an alligator. Voodoo is a fact of life down here, with the deputies giving credence to reports of the Rougarou— a man who can turn into a wolf or a dog. 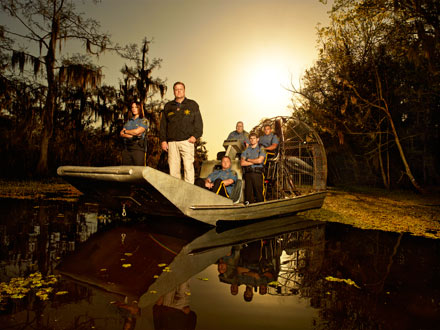 Cajun Justice distinguishes itself with stylish cinematography, a smoky soundtrack, and effortless eccentricity. If it catches on, I wouldn’t be surprised to see the Rougarou get his own spinoff series. 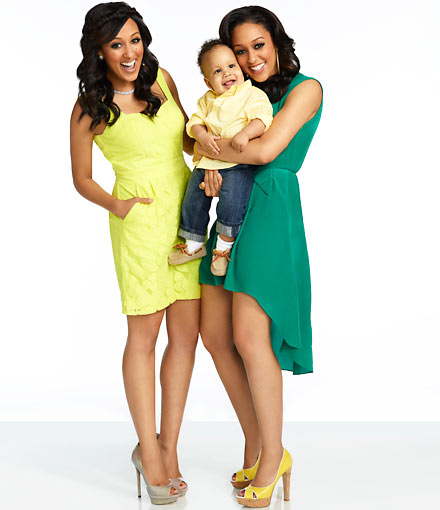 The only problem is that it’s sometimes hard to tell Tia and Tamera apart—and not just because they look alike. They spend a lot of time talking about their different “brands,” but it seems like pretty much the same brand to me. The twins finish each other’s sentences, underscoring your sense that they’re basically a single person.

In this week’s episode, Tia and Tamera are up for a part in the same movie, with the drama hinging on who will get it. A tip for the casting director: Either one will probably be fine.

It’s hard to figure out the target audience for this new series. ABC Family is presumably for, you know, families, but Bunheads begins amid talk of boobs and booze in Las Vegas. Showgirl Michelle (Sutton Foster) is a once-promising dancer who’s grown too old for musicals. As a result, she’s become cynical and debauched, impulsively marrying a stranger who promises her a life in paradise.

When Michelle gets to paradise—actually, it’s her groom’s small hometown, named Paradise—we begin to see more characteristic ABC Family elements. Her disapproving mother-in-law runs a dance studio for girls, a.k.a. a shot at redemption for Michelle. You might think the adult-oriented scenes would mix uneasily with the tween-oriented scenes, but Bunheads pulls it off. Sutton, an idiosyncratic Broadway star, is a real find as Michelle. Her comic talent holds this unusual production together.

I just figured out the target audience for Bunheads: me.

Cooking shows don’t get much more enjoyable than MasterChef. British host Gordon Ramsay is less nasty here than on Hell’s Kitchen—appropriately so, since the contestants are mere amateurs. Sure, he still mimes vomiting whenever he encounters a bad dish, but he also shows a more gentle and generous side.

As usual, many of the contestants try to impress him and the two other judges with their cockeyed confidence. “I’m about to flavor-blast my way to the top!” says a typical guy who’s taken self-reliance a step too far. But luckily, there are other, less grating personality types, including a blind woman with touching courage.

I’m ready for MasterChef to flavor-blast me through the rest of the summer.