Red-tiled rooftops in Florence seen through a window. (Photos by Leigh Badgley)

It all started innocently enough. I traveled south by train from Verona, Italy, to spend a week touring Florence and Siena.

The first couple of days went like clockwork. I met with an adventurous British woman who’s lived in Tuscany for 20 years. We had some lively conversations over meals, and in between visits I walked. And walked. And walked. ‘Cause that’s what tourists do. It’s also what Italians do in the historical centers of their fabulous cities. This is the secret as to why they’re not generally overweight even though they eat pasta more or less every day. 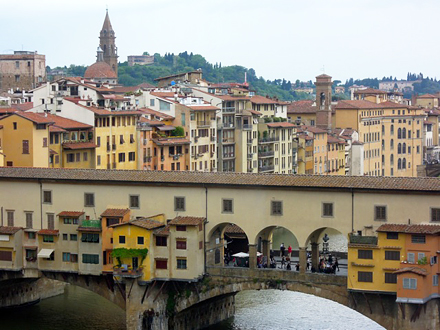 A view of the Ponte Vecchio seen from the Uffizi gallery.

Florence is a city of intoxicating beauty, but it was also the scene of some pretty wild spectacles—juicy fodder for a drama queen like me. So off I went in search of adventure, past and present, alone and happy on a perfect sunny day. My snazzy blue Geox trainers propelled me across the Ponte Vecchio, an arched medieval bridge lined with cubicle-like jewelry shops. It’s from this very stone passageway that Lauretta, a character in Puccini’s opera Gianni Schicchi, threatens to throw herself into the River Arno if her father won’t let her marry the handsome Rinuccio. For a moment, I pondered the muddy water below and decided to keep going. 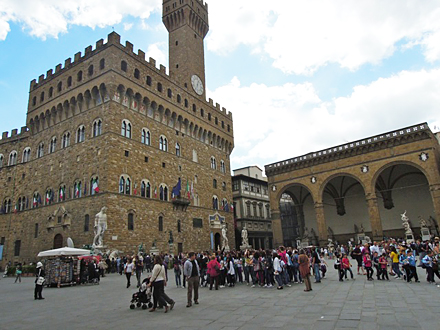 Piazza della Signoria where Savonarola was executed in 1498.

Passing the spectacular art museum Galleria degli Uffizi, I continued on into the commanding Piazza della Signoria where the puritanical zealot Friar Girolamo Savonarola, who’d once arranged for a bonfire into which precious Renaissance works of art were tossed, was hanged in 1498. Shortly before his execution, Savonarola confessed that he’d made up his prophecies about biblical floods and other perils that so terrified the Florentine populace they turned against their protectors, the de’ Medici family. 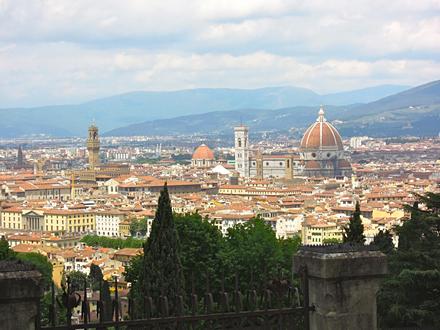 Resisting the lure of shops, I kept walking until I reached Florence’s famous red-roofed cathedral, Il Duomo. The exterior alone takes your breath away, but even better, the stuff of arresting legends lives on inside. During High Mass on Easter Sunday, 1478, in front of 10,000 worshippers, members of a rival family of the de’ Medici, the Pazzi (meaning “crazy ones” in Italian), attacked two of the de’ Medici brothers. After being stabbed 19 times, Giuliano died on the cold marble floor while Lorenzo escaped into the safety of the sacristy, wounded but not fatally. Twenty-nine at the time, Lorenzo was a hard man to keep down. He went on to become Lorenzo the Magnificent, a visionary humanist and patron of many of the great artists whose works now hang in the Uffizi.

On the third day, my friend Linda from Verona, and Andrea, a Florence-born friend who wanted to show off his amazing city, joined me. Being world-savvy travellers, we smugly booked tickets to the Uffizi ahead of time, thereby avoiding the crushing lineups. And into one of the world’s greatest galleries we swept, guidebooks in hand, hearts flush with excitement.

We admired how Giotto’s use of chiaroscuro changed the way painters approached perspective—which many art historians claim is the beginning of “modern art”—and were struck by Fra Angelico’s craft in depicting the lives of Christian hermits that reminded us of ashram life in India.

And then, the Botticelli Room.

Sandro Botticelli, at the top of the A-list of Renaissance artists, draws big crowds at the Uffizi, and as soon as I entered the room, I started feeling hot, weak, and sweaty. I peeled off my layers, managing to maneuver my way around the throngs to get a good look at The Birth of Venus and Primavera. I’m not sure if it was because Botticelli’s remarkable paintings are so splendidly lyrical and emotionally overpowering, or because I felt claustrophobic, but I had to sit down several times in this room and throughout the rest of our visit to the museum. Nonetheless, we pressed on, looking at works by Leonardo da Vinci and Michelangelo and the fabulous painting of Sir Richard Southwell by Hans Holbein, but sadly I reached the tipping point just before we got to Caravaggio. 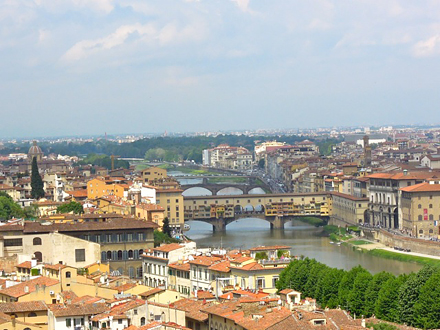 Pasta to the Rescue

Feeling vaguely disoriented, I was relieved when Andrea helped steer us to a nearby trattoria in Via Dante. Another friend joined us, talking in rapid staccato about the birth of the Protestant church. Although I feigned interest, it wasn’t until I tucked into a dish of tagliatelle al pesto that I started feeling my old self coming back to life. By the time I scarfed down profiteroles drenched in chocolate—my drug of choice—I had more or less recovered, and we promptly set out to visit the Medici Riccardi Palace.

Over the next couple of days, Andrea kept joking about us contracting Stendhal Syndrome, a documented, temporary illness in which a visitor to Florence experiences confusion, dizziness, fainting, or rapid heartbeat when exposed to large amounts of beautiful art. It’s actually for real; the French writer Stendhal described such experiences during a trip to Florence in 1817, and in 1979 an Italian psychiatrist named the condition after the author after witnessing several cases amongst tourists in Florence.

I don’t know if I had a touch of Stendhal Syndrome or if I was just fatigued, but if you’re going to Florence, here’s a tip: wear comfortable shoes, drink plenty of water, and order pasta immediately in the nearest trattoria if you get a case of the shakes from beauty overload.

Leigh Badgley is a television producer and writer on sabbatical in Verona, Italy.