Overhead view during construction of the Fairfield Arts and Convention Center.

Everyone agreed that a downtown location was the ideal place for the new civic center, and a final site was chosen on land opposite the Jefferson County Courthouse. Once again, architect Kelsey Mullen and his team redid the drawings for the building to reflect its new spot just east of the Courthouse. Courteous visits to adjacent homeowners were made to discuss acquiring the necessary property.

Under Gary Vance’s guidance, the Board applied once more for the Vision Iowa CAT (Community Attractions and Tourism) grant. Happily, their application was accepted this time around and the grant award for $800,000 came in January 2003.

An early setback occurred in September 2001, when Gary and the Board decided to officially announce the kick-off of the Jefferson County Civic Center Capital Campaign. On the chosen day, initial signs promised a successful launch, with over half a dozen media outlets slated to attend.

Sally Denney hummed a tune to herself as she drove over to the conference venue, the Farm Bureau offices of Pat Kessel. She flipped on the car radio, and what she heard was utterly bizarre.

Gary Vance explained what happened. “We were pumped and ready to go,” he said, “but minutes before our first conference was scheduled to begin, the phones started to ring.” As the reporters took their calls, their faces turned ashen, they excused themselves, and left the room. What was going on?

At the Farm Bureau, everyone gathered around the TV. They watched stunned, in real time, as a passenger jet plunged into the second World Trade Center tower. It was September 11, 2001.

“The effect was numbing,” Gary recalled. “It was all you could think about for a long, long time. To move into campaign mode at that time was very, very difficult.”

But, as Gary had said, this was an extraordinary board: “They just would not let this project go down.” Gary stayed on for another year, raising a significant amount of money. At that point, Gary knew he had put in enough time that he could graciously retire from the scene. He saw no point in draining the effort to pay his fees now that his students had become experts themselves, dynamos of self-reliance and resourcefulness.

“I never experienced anything like this, before or since,” he said of the deep friendships he made. It had been the high point of his career.

Quickly, forward-thinking leaders of the community stepped in. Starting November 2003, Linda Stallone, Board members, and a committee of devoted leaders worked full steam to raise another $1 million. About six months in, Mayor Ed Malloy and banker Dave Neff created a standing appointment—every Wednesday at 3 p.m.—during which they went out together to meet key potential donors.

Was this a risk for community leaders? Yes, but the reward was great. Fairfield was already on the map in Iowa as a big player—a small town with a cosmic vision. A small town with an unbeatable economic engine that breezed through economic distress that had clobbered neighboring communities. A small town where art, music, and drama were intimately intertwined with everyday life.

An important watershed in 2003 was the town vote on the 1% Local Option Sales Tax (LOST). It had been earmarked for the new jail. With that completed, the funds continued to cover street repair and cultural events, among other things. The City Council, after discussing the Civic Center’s need for funds, felt that the best course was to put it to a full town vote. A resounding two-thirds majority of voters responded “yes” to approving those funds for Civic Center use. It was a victorious moment, with the vote establishing strong local support to build the center.

The Battle for the Civic Center

For five full years, the fund-raising went on for donations large and small. But each time the goal seemed close at hand, costs rose and yet another round of fund-raising was required. This created tensions on the Board, as some began to feel it was not responsible to continue.

David DuBois, an organizational psychologist by profession, was invited onto the Board when Tom Stanley, a great champion of the project, was called out of town and needed to step down.

“This project had drama,” David said. “It was a warm and fuzzy project for everyone. . . . But when it looked like it actually was going to become a reality, people got nervous.”

In 2005, when demolition of the site’s existing structures had been completed, the ground-breaking ceremony accomplished, and construction about to begin, Iowa State Bank, who had partnered with the project to provide a major loan, notified the Board with a surprising development. The USDA Rural Development Loan Guarantee required that the Civic Center conduct an expert archeological dig to ensure that no items of historical importance lay buried beneath the site. 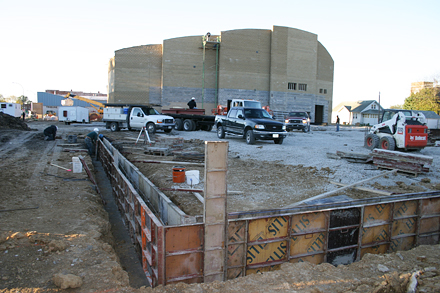 The future Sondheim Center for the Performing Arts.

Ultimately, construction was delayed for almost six months, and that delay proved extremely costly. Two unrelated events shot the cost of building materials—steel in particular—through the roof. One was Hurricane Katrina, which necessitated massive rebuilding in New Orleans. The other was booming growth in China, where new high rises were sopping up the world supply of construction steel.

An engineering firm hired to reduce costs took several additional months to value-engineer the project. During that time, the cost of steel rose to $400,000.

“There was no way around it,” Suzan Kessel said. “Yet another redesign was required to scale back the overall size. But it was not that simple. The Vision Iowa/CAT grant from the State of Iowa had us locked into a specific square footage that we could not reduce. It was a dilemma.”

In the end, the Board contacted the CAT committee for a fundraising extension and approval for a new design.

It was back to the drawing board yet again, as Kelsey and his crew worked to eliminate steel and brickwork in favor of concrete block. They scrapped steel beams supporting the roof structure and substituted massive wooden beams instead. 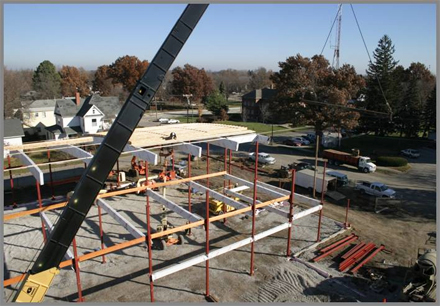 Fortunately, local Fairfield contractor Schaus-Vorhies stepped forward, working diligently with Kelsey Mullen and Mark Bowers on tweaking designs and materials to reign in costs and save the center. “The Schaus-Vorhies crew were real heroes,” said Suzan. “Our hats are off to them. They played a key and unforgettable role in all aspects of the Arts and Conventional Center from this time on.”

Tensions on the Board

The on-going battle with unexpected obstacles and delays put a strain on the Board. At the first meeting that David Dubois attended, two members had concluded that abandoning the project was the only responsible thing to do. David, the Board newcomer, inspired everyone by invoking the history of Fairfield’s Chautauqua days. He recalled how citizens had enthusiastically prepared for Chautauqua days, constructing a huge building large enough to accommodate the entire town. He also appealed to reason, reminding everyone of innovative ways that additional funds could be raised.

In the struggle to move forward, details too numerous to mention make this story one of high drama. To tell the full story, a brochure will lay out the colorful history of contentious issues faced by the Board as they plowed ahead to victory.

As Kelsey Mullen said, “There were a thousand times that this project could have gone down.”

To read earlier chapters of the story to go:

Part I: Fairfielders Dream About a Performing Arts Venue