“The purpose of art is not to reproduce life, but to present an editorial, a comment on life. . . . When we actually see ideals, they become real to us. . . . We believe in something we can see.” —Marvin Cone

For the first time since 1980, a large body of artwork by American Regionalist Marvin Cone will be exhibited in a seven-gallery solo exhibition at the Cedar Rapids Museum of Art. The exhibition will reassess Cone’s work, but more importantly, it will reveal it in context to the greater sphere of American art.

Marvin Dorwart Cone met his lifelong friend Grant Wood in 1906 while growing up in Cedar Rapids. The two artists were born in 1891. Wood’s art career brought him great fame, while Marvin Cone’s enormous talent was more modestly imprinted on the art world. Nevertheless, he was held in high esteem by his artist contemporaries. In his 42 years as a professor at Coe College, he touched the lives of innumerable students. Today, Marvin Cone’s artwork continues to enrich the artistic heritage of Iowa.

Marvin Cone lived his entire life in Cedar Rapids. He attended Washington High School in 1910 and attended the School of the Art Institute of Chicago. He graduated Coe College in 1914 and later became a professor at the college, where he taught French from 1920 to 1934. Cone created the art department at Coe and after his retirement in 1960, he became an artist-in-residence there.

In the dawning of World War I, Cone enlisted in the Iowa National Guard, serving in the 34th Infantry Division in 1917. He actually designed the Red Bull insignia that continues to be worn by the unit today. After some time spent as an interpreter in France, Cone remained there to attend L’Ecole des Beaux Arts in Montpellier. He then returned to Iowa, accepting a professorship with Coe College for the 1919-20 school year.

Marvin Cone returned to France at the end of the school year with his friend Grant Wood, sharing plans to hone their artistic skills and techniques. The artists painted Parisian street scenes, gardens, and French countryside landscapes. Cone produced some extraordinary impressionist works during that period. He later returned to France with his wife Winifred in 1929, and also traveled to Mexico in 1939. 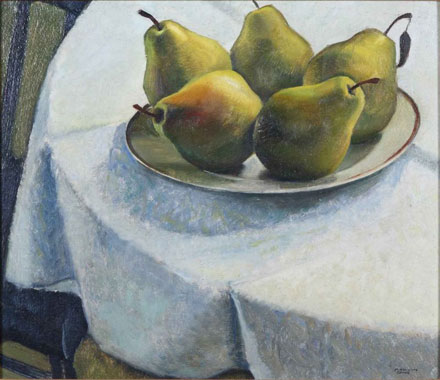 After their painting expedition in France, Marvin Cone and Grant Wood joined an art colony in Stone City, Iowa, at the Green Estate. The art colony was conceived by Edward Rowan, director of the Little Gallery in Cedar Rapids. He was joined in its creation by Adrian Dornbush, former director of Flint Institute of Art and an instructor at the Little Gallery, and the famous Grant Wood. The Stone City Art Colony existed in 1932 and 1933, supported by funding from the Carnegie Foundation.

Cone’s lifetime body of work contains a tapestry of periods, including his early colorful Iowa landscapes and barns, impressionist Parisian scenes, billowing cloud paintings, vivid depictions of carnival life, enigmatic room paintings, and abstracts at the end of his career.

Cone held a fascination for architecture and landscapes. Although he was a master of realism, his images were infused with an inner vision that transforms mere depictions of reality into a world that transports and stimulates the imagination of the viewer. In one of his important paintings, River Bend #5, Cone’s vision transmutes a serene landscape into a vast structure of moving architecture.

Cone’s artistic vision was influenced by the American Regionalist trio Grant Wood of Iowa, Thomas Hart Benton of Missouri, and John Stewart Curry of Kansas. The Regionalists tended to lean away from the influence of cities, preferring the strong, warm images of the American heartland, which had gained popularity in the 1930s. A thread of influence on Cone’s work can also be tied to the artwork of the “Taos Masters” of New Mexico.

The various periods of Marvin Cone’s artistic career reflect his appreciation for the diverse, innovative visions represented in the art movements of Europe and America. His own vision, however, was uniquely and masterfully his own.

Marvin Cone passed away in 1965. The Winifred Cone Gallery, named after his widow, is an honored home for the former professor’s artwork at Coe College.