On Friends, Matthew Perry created one of the funniest TV characters of all time in the neurotic quipster Chandler Bing. Perry hasn’t clicked in any starring vehicle since then, but not for lack of trying. After the doomed Mr. Sunshine and Studio 60 on the Sunset Strip, he returns in Go On, playing a sports broadcaster named Ryan who’s sent to a grief-counseling group to deal with his wife’s death (Tuesday, 8 p.m., NBC).

The series draws on Perry’s strength— nonstop wisecracks—but can’t find the right tone. It often comes on like a silly farce, with Ryan making a mockery of the kooks in his group. But then the soundtrack strikes a sensitive chord, images of a cemetery flash onscreen, and Ryan begins pouring out his heart. I don’t mind mixing drama and comedy —Shakespeare pulled it off pretty well—but that approach takes a certain delicacy. Delicacy is in short supply in Go On, at least so far.

I’m still pulling for it, though. I’ll have to join a grief-counseling group myself if the great Matthew Perry is forced into early retirement after yet another flop.

I appreciate Paul McCartney’s interest in trying new musical directions – a heroic attempt to keep the creative juices flowing into old age. So I was tolerant of his recent stab at the American songbook, Kisses on the Bottom, even though it missed the mark. In a companion program called “Live Kisses,” the Beatle performs selections from the album at L.A.’s Capitol Records building, accompanied by jazz musicians like Diana Krall and John Pizzarelli.

The fact that “Live Kisses” is filmed in black-and-white is the first warning sign. Clearly, Paul is more interested in playing the 1940s crooner than in owning the material in the present. His versions of “Always” and “Bye Bye Blackbird” are pleasant – Paul’s voice could never be less than pleasant – but he has little feel for standards, despite what his bandmates say in their effusive interviews. The tempos are sluggish, and Paul has no melodic or rhythmic ideas for bringing the arrangements to life. Instead, he accents the corniest beats and ventures hepcat embellishments that only make him sound more square. And the lyrics would have been better served by playfulness than by reverence.

Walking past a photo of early rocker Gene Vincent in a Capitol hallway, Paul breaks into a spontaneous rendition of “Be-Bop-a-Lula.” These five seconds, with Paul singing in his true idiom, feel more exciting than anything else in “Live Kisses.” 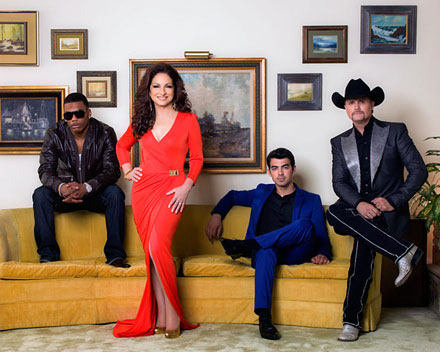 Nelly, Gloria Estefan, Joe Jonas, and John Rich from The Next.

I don’t approve of the title, which awkwardly turns an adjective into a noun, but I like everything else about The Next. It travels from city to city, identifying four locally popular singers in each one. Then the show’s four mentors —Joe Jonas, Nelly, Gloria Estefan and John Rich—get them ready for a performance showdown. During that time, the mentors move right into the contestants’ lives, meeting their friends, mowing their lawns, etc. It’s a gimmick, but a successful one, thanks to the stars’ appealing personalities. They take the concept just seriously enough but also have fun with it.

The Next is so much more appealing than the fading American Idol. I’m going to start calling it The Excellent.

This new sitcom is all about tolerance for alternative families. An L.A. gay couple (Andrew Rannells and Justin Bartha) decide they want to have a baby with a surrogate. Enter Goldie (Georgia King), a single mother who’s escaped from the Midwest with the hope of starting a new life. The New Normal challenges the notion that there’s only one way to raise a child. As someone says, “Face it, honey, abnormal is the new normal.”

It sounds great on paper. But The New Normal hedges its bets by casting Ellen Barkin as Goldie’s small-minded granny. She’s there to represent the traditional point of view, and the script takes her character way over the top. Barkin spews hateful comments about Jews, Asians, African Americans, gays and handicapped people. True, the series is technically satirizing bigots like her, but it’s also trying to get a charge out of Barkin’s nonstop slurs. In the pilot, our gay heroes chime in with a few nasty cracks of their own about fat people. Where’s the tolerance in that?

King is a lovely presence, so maybe The New Normal can build on that. At the moment, I see no evidence of a heart, and that’s pretty disappointing given the theme.

I like to collect pop-culture artifacts as much as the next nerd— okay, maybe a little bit more — but this reality series profiles people whose collecting passion has become a dangerous obsession. We meet a guy who spends all his money on Catwoman collectibles rather than pay his mortgage; and a grown woman who weeps at the thought of selling her Star Wars figurines— a.k.a., her “friends.” Who knew you could develop an intimate relationship with a plastic Ewok?

To the rescue comes Christie’s auctioneer Elyse Luray, an expert in pop-culture collectibles. She wades into houses full of junk and gently weeds out the collections, convincing the hoarders to auction off as much as they can bear.

As horrified as I am by these people, I’m also slightly interested in buying the plaster Michelle Pfeiffer Catwoman bust, depending on the price.